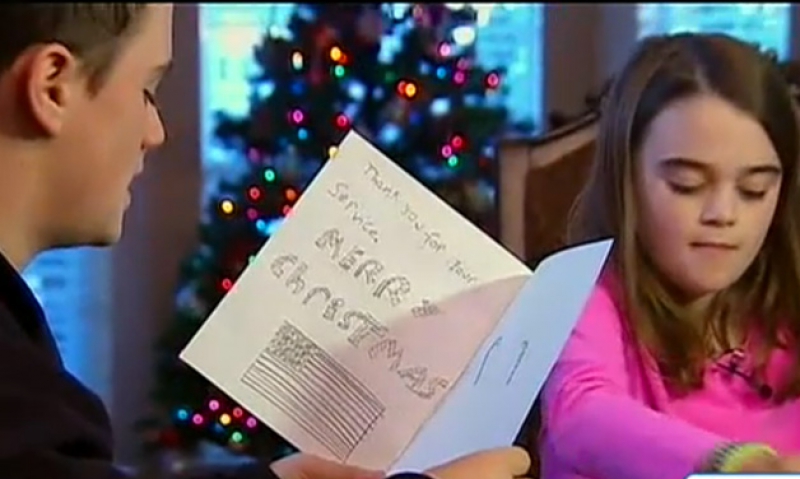 Handwritten Christmas cards from schoolchildren were denied distribution to veterans at the Dallas VA Medical Center this week because they referenced the holiday by name, and American Legion National Commander Daniel M. Dellinger is not happy about it. Neither is the Liberty Institute, which has sided with the Legion in opposing a number of other attempts to prevent free expression of speech and religion.

Also this week, the VA hospital in Augusta, Ga., announced a new policy that turned away high school students who intended to sing Christmas carols to veterans, as they traditionally have in past years. And in Iowa City, American Legion members were told they could not hand out presents to veterans if the wrapping paper said Merry Christmas, a problem they solved by filtering the gifts through the VA chaplain.
The American Legion has asked VA Central Office for an explanation of why it appears that Christians are being singled out for restrictions, especially when the holiday honors the birth of Jesus Christ.

“First of all, VA’s decision to prohibit the delivery of Christmas cards that mention Christmas is ludicrous,” Dellinger said today after Texas teacher Susan Chapman was told Monday that her students’ cards would not be delivered to veterans. “Second of all, VA has been down this road before, and recently. VA has been warned through a federal court decree to stop denying freedom of religious expression at its facilities. It’s pretty obvious the Dallas VA did not get that memo.”

When high school singers arrived last Friday at the Augusta, Ga., VA Medical Center, officials reportedly gave them a list of 12 approved, secular holiday songs. Unprepared to sing them, the students opted not to perform. “That’s censorship, pure and simple,” Dellinger said of the rejected carolers. “Every Christmas, every religious holiday, Christians are more and more often targeted for censorship and restriction at VA facilities. Veterans in these hospitals fought to protect such freedoms.”

Chapman, the wife of a U.S. military veteran, has requested that the Dallas VA Medical Center immediately rescind its discriminatory policy and allow her and her students – and any others in the future – to distribute Christmas cards that say “Merry Christmas” or “God Bless You” or mention Jesus. Writing to VA Secretary Eric Shinseki and VA North Texas Health System Director Jeffery L. Milligan, the Liberty Institute set a deadline of Dec. 27 for confirmation in writing “that Mrs. Chapman and her students may distribute cards that contain the phrase ‘Merry Christmas,’ ‘God Bless You,’ or that contain other religious references to veterans at the Medical Center and at all other VA hospitals, and that the holiday card policies of the Department and the Medical Center (are) brought in line with applicable law.”

“Of course, for this year’s schoolchildren, it’s a little late, and that’s really disappointing,” said Dellinger, who leads the 2.4-million-member American Legion, largest veterans organization in the country. “VA needs to let those children deliver cards to the veterans now, and those who wrongly banned them owe an apology to the children, the teacher and the veterans who were supposed to get them Monday. This is a clear case of discrimination on the basis of religious expression; the courts have already ruled that such policies are unconstitutional. The American Legion fully concurs with that interpretation.”