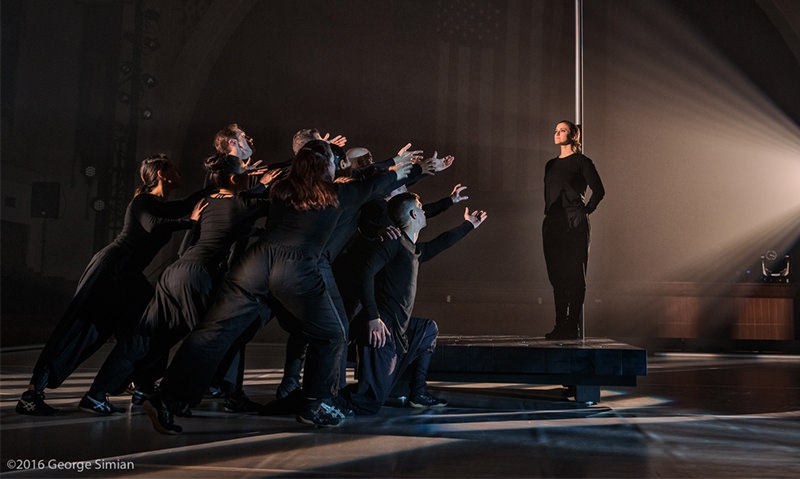 “When you work with non-professional dancers they do it in their own way, but it’s real, it’s authentic and that is quite beautiful,” said Jacques Heim, artistic director and co-director of Ibuki, and founder of Diavolo in 1992. “You’re here to celebrate three months of a workshop with these veterans. Three intense months that culminates into something that we call ‘Ibuki’” – a Japanese word that means “resilience enough to endure, it represents the veterans.”

The Veterans Project was developed nearly two years ago by Diavolo Institute Director Dusty Alvarado as a way to provide an “artistic outlet” for veterans; dance or theater experience is not required. The program allows veterans to engage in movement workshops, artistic creation and collaboration.

“This program is very meaningful and personal to me,” said Alvarado, whose grandfather served in World War II and recently passed away at 97. “So I am honored to continue his legacy with this project.”

The Ibuki performance was an expression of movement that simultaneously represented each of the performers individually and as a whole as they reacted to the space and energy around them.

Dancer Christopher Loverro, a Post 43 member and an Army veteran who deployed to Iraq and Afghanistan, said, “War really does affect your soul, and you’re never quite the same. Diavolo has taught me that I can find peace.

“When I returned from Iraq I was suffering from acute symptoms of PTSD and one night I almost took my life. I’ve tried almost every type of therapy there is… and I’ve never been able to find my way home. But now I have through Diavolo. It’s been almost a decade since I’ve been back from my experience in the war, and this really is the first time I have truly felt at peace.”

The environment Ibuki Co-Director Stephan Koplowitz strived to create with this project “was to encourage people not to be afraid because sometimes if you say it’s dance people can have their own cliché thinking about that, so we really stressed that these were physical movement workshops. I’ve been working in this field for over 30 years and I am incredibly proud and impressed with Diavolo because as a community outreach project, this is a project that really walks its talk. It’s been amazing for me to be a part of the team.”

David Gleason, a Marine Corps veteran from Biloxi, Miss., also searched for various methods and treatments to rehabilitate his life before he decided to turn to the arts for healing when all else had failed. “PTSD has consumed my life and bludgeons every facet of my existence,” Gleason said. “Diavolo exposes its performers to the very limits the human body can express itself. It forces our minds to think bigger. I’ve learned how to better control my triggers, and it’s brought more awareness to my thoughts and how to cultivate them in a more positive way. This work has taught me to paint different pictures, to attribute more love into my life. But more importantly it’s given me a renewed sense of purpose.”

The struggle to perform at this level directly represents the ability to succeed at anything in life. After being in an accident that left her with a broken hip, Martha Guevara, an Army veteran of the Iraq War from Los Angeles, became enthralled with the human body and soul and how beautifully it can heal when it is taken care of. Her faith, taking dance classes and moving her body around have helped Guevara manage post-traumatic stress and the hardships of everyday life.

“One thing I’ve learned is that we should not say, ‘I can’t’. Maybe not yet, but we will,” Guevara said. “I realized the final product isn’t the most important thing, the process is more important because that’s something we take with us the rest of our lives.”

Shannon Corbeil, a Post 43 member and an Air Force veteran, agreed. “Jacques would tell me to do things, and I’d say I can’t, but he said do it anyway and I’d find out I could. Maybe not the first try, maybe not well, but I did them,” Corbeil said. “Once I observed that, I came upon a very important question, which was ‘what else have I been holding myself back from?’ What this workshop, and what these dancers have taught me, is to believe in myself again, to repair that crack in my self confidence, and to recognize this idea that Jacques has planted that I just might be limitless.”

The Veterans Project is moving forward with two more phases that will consist of a collaborative effort where veteran participants and members of Diavolo will share their own experiences to devise a performance piece that will culminate in a fully produced engagement.