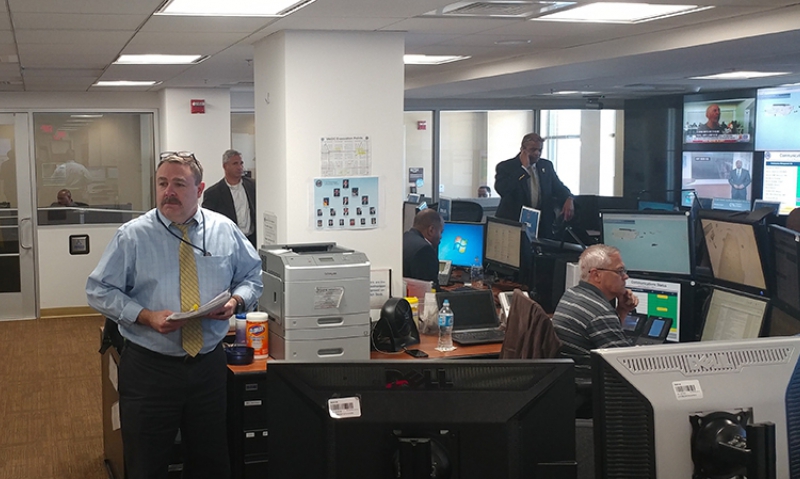 The American Legion met with VA leadership on Sept. 29 to learn what humanitarian aid VA is, and has been, providing to hurricane victims in Puerto Rico, the U.S. Virgin Islands, Florida and Texas.

“We have veteran homes in Puerto Rico that we’re checking on and making sure we evacuate people if there’s no air conditioning or power,” VA Assistant Secretary of Operations, Security and Preparedness Donald P. Loren said. “The Virgin Islands took a big hit with Hurricane Irma. We took dialysis patients (not only veterans, but non-veterans as well), transferred them through Puerto Rico and then medevaced them back to the United States. We were coordinating the transfer and evacuation of medical cases from San Juan during Hurricane Irma.”

VA reported in a Sept. 22 news release that Hurricane Maria knocked out electricity and damaged communication systems in Puerto Rico. VA officials have been sending relief resources to the San Juan VA Medical Center, which is currently operating on generator power and providing health care for more than 330 inpatients. Primary care and mental health services are also available for walk-in patients.

VA officials have also been monitoring the VA Caribbean Facebook page and responding to family requests for status of both patients and staff, according to the release.

“We’ll assign people to where they are needed and get extra medical staff, water and food. Instead of being veteran clinics, these are now community-health facilities,” Loren said. “There are 60 civilian hospitals in Puerto Rico, many of which are still inoperative, don’t have power or have serious damage. There’s only one hospital that is like the beacon in Puerto Rico and that is the VA medical center – seeing people, taking care of everybody we can and feeding everybody we can.”

As of Sept. 30, CNN reported that the U.S. Virgin Islands were struggling to recover from the damage caused by hurricanes Irma and Maria. The storms, both of which were Category 5, left residents without shelter, communication or power. Streets littered with debris have caused major challenges with transporting resources and personnel.

“We did a lot of preparing and started sending stuff down there before the hurricane. Now we’re using these resources to take care of non-veterans and civilians until the hospitals – that are either damaged, incapable of operating or we don’t know the condition of – come back into the system and then we’ll transfer them. It is certainly necessary for a humanitarian effort like this,” Loren said.

According to an email the Legion received on Oct. 5, VA services are now being provided at both Veterans Benefits Administration and Veterans Health Administration facilities, either from temporary structures or mobile facilities. The national cemetery in Puerto Rico is also open to the public and operating on its normal schedule.

“Even in the midst of all this, we still buried 10 veterans with dignity. We are doing our best to return to normal operations and service to the veteran community, in addition to contributing to the humanitarian effort as part of the federal response,” said Loren, the former deputy assistant secretary of defense for Homeland Security Integration. “It’s only the sophistication of an organization that can provide for others in a time of need — that’s what is so good about the VA.”

“The secretary has the authority to use any of our facilities for humanitarian effort and it’s the right thing to do,” Loren said. “After Hurricane Irma and the non-VA nursing home in Florida where nine people died because of no power or air conditioning, we were very much involved in helping to: take some of those people and put them in VA facilities, or get those people to other civilian hospitals that in fact could care for them. Of those people, only one of them was a veteran. Nobody knows that we did that – but that’s what we do because this is a huge humanitarian effort and it’s all for American citizens.”

Loren said VA leaders and staff are working closely with the U.S. Department of Health and Human Services, as well as the Federal Emergency Management Agency, state and local partners, on the overall response to hurricanes Irma, Maria and Harvey. They are determined to relieve the hardship and find ways to help fellow citizens in this time of need.

“If your home is not habitable, we do one of two things: we try to get you into another place to live or we get you into some sort of temporary housing,” he said. “In Texas, there are a number of VA employees who had their homes severely damaged. We always have, unfortunately, a number of homes in foreclosure somewhere. As long as they’re in good condition and ready for resale, we put people in those homes. We have eight people that now want to buy those homes in Texas.”

VA officials are also coordinating standby personnel to deploy in the event they are needed, along with mobile shelters and mobile medical units which can be used to augment medical services in the area to expand operational capacity, according to VA’s Office of Media Relations.

“We parked a mobile vets center and a mobile pharmacy with The American Legion and some other non-governmental organizations. Those are the kind of opportunities that we look for,” Loren said. “We did that in Texas and it worked very well with all of us working together.”

Shulkin has directed VA staff to break down barriers and eliminate any red tape to ensure veterans receive seamless care at any VA health care facility throughout the nation. Veterans of storm-affected areas who require immediate assistance are asked to contact the Health Resource Center Disaster Hotline at (800) 507-4571.

“We keep it running; we just do it differently,” Loren said. “This is important – we’ve had three rapid successions of storms that have put Americans at risk. In our normal, daily function of taking care of veterans and their families, it’s important in times like this to recognize that we’re a part of a bigger family. We will do our best to assist everybody in recovering from the devastation of these types of events.”