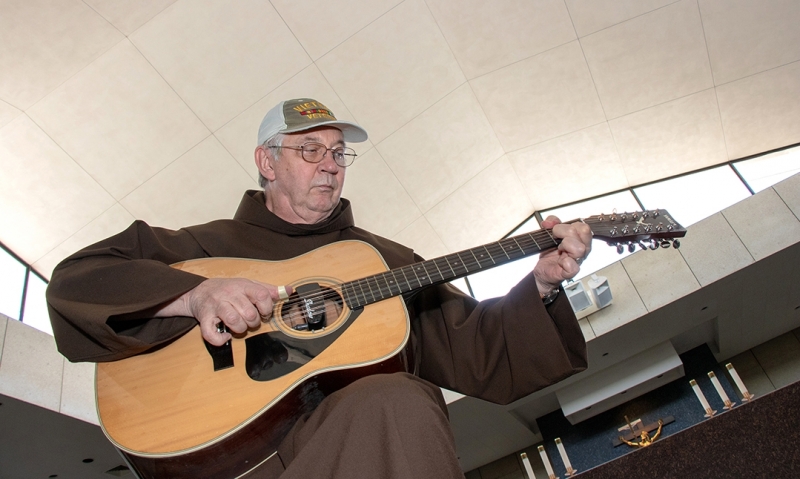 Flying over the jungles of Vietnam in an Air Force rescue helicopter, Sgt. Ed McKenzie was struck by an inspiring vista.

“It was a beautiful country if you could look beyond the misery of the war. It could have been a garden of Eden.”

Today, McKenzie remembers the Vietnam War in another way – as a Franciscan priest offering daily Masses for busy downtown Chicagoans. When he consecrates the wine on the altar, his mind flashes back to his helicopter, messy with the blood from the wounded and dead. He is suddenly in the chopper, back from its rescue mission, and he is once again washing away the blood. But no cleansing removes the haunting memory.

As a Franciscan, McKenzie simply goes by Father Ed or Friar Ed. He is one of 12 priests offering services and hearing confessions throughout the day at St. Peter’s Church, sandwiched between the tall buildings on Chicago’s West Madison Street. He enjoys playing the guitar, banjo and mandolin. (His favorite tune is “Sweet Wyoming Home; “that’s a sweet little song, fun to play.”)

At a recent conference for Franciscan seculars and religious, Father Ed donned his Vietnam Veteran cap, picked up a guitar in the chapel, and started strumming a few verses of “Canadian Railroad Trilogy.” It was almost imperceptible, but there was a slight choke to his voice as he sang the words, “many are the dead men too silent, to be real.”

Perhaps it’s not surprising that, like many war veterans, he suffers from post-traumatic stress syndrome (PTSD). But, he says, PTSD is also a gift that enables him to relate to veterans, including serving as a VA chaplain. He runs four spiritual retreats each year for veterans, and he is a member of American Legion Post 924 in Teutopolis, Ill., (about 212 miles south of Chicago).

Other life experiences help make him a better man of the cloth too. “I’ve been married, I helped pay the mortgage, I helped raise a family, I stayed up with sick kids at night, I helped put them through school, I know the pain of a marriage falling apart. And it has helped me in my ministry.”

After being discharged from the Air Force in 1972, McKenzie got married, started a 25-year career as a printer, and joined the Naval Reserve, working as a jet mechanic at Weymouth Naval Air Station in Massachusetts.

McKenzie says his wife was “a good person,” but that he “was a hippy headed for hell.”

“I was difficult to live with,” he says, singling out his PTSD. Eventually they agreed to end the marriage, and it became a blessing for everyone involved. “We both changed for the better.”

In fact, McKenzie says, “I was the poster child for conversion.”

He moved to Michigan, continuing his printing career, and began looking into bettering himself spiritually. He found himself serving as a Eucharistic minister, then as a teacher for people learning the faith, then taking a few classes at a seminary, and eventually thinking about religious life. McKenzie had once before thought he had a religious vocation, when he was a student at a high school seminary, but “I decided I liked girls too much.” A friend from the seminary days contacted him and urged him to consider the Franciscan Order.

God allows us free will, he notes. But when one decides to stop putting himself first, and give himself over to God, “suddenly He gives the graces to succeed.”

McKenzie “went from being a C student” to “suddenly getting As,” he says. “I got my degree and almost had a 4.0 average.

“When you align yourself with God’s will, He’ll give you the graces to do amazing things. He’ll allow success in other areas … but when you put Him first, it’s amazing.”

Once he was in the Order of Friars Minor (OFM) seminary, it was almost a whirlwind experience for him. He took temporary vows in 2005, then made his permanent profession, then ordained a deacon, and finally ordained a priest in 2012.

As a wartime veteran, Father Ed believes he has some insight into Francis of Assisi, the 13th century Italian saint who founded the Franciscan Order. Before his conversion, Francis was a brash, partying young man, the son of an affluent merchant. He dreamed of being a great knight, a glorious warrior.

Father Ed has been researching original source documents, including eyewitness accounts of the Battle of Collestrada in 1202 where about 3,000 Assisians and their allies were slaughtered by the army from Perugia.

Francis was outfitted like a knight. “He was armored, he had a horse,” McKenzie says. “That was a big deal that he had a horse. He probably had a broad sword and a mace. He was a state-of-the-art killing machine expected to go into battle to kill.”

After being captured, Francis was imprisoned in a dungeon for a year. His health was failing. He had seen the horrific slaughter of his fellow Assisians. As one eyewitness put it, Father Ed quoted, “Arm was not found near leg.”

Francis returned home a changed man. “He was affected deeply by PTSD,” Father Ed believes. “Same as I am.”

Friar Ed continues: “I believe the order’s founding came out of the idea that he was a sick man looking for redemption … He wasn’t the same happy-go-lucky guy. There was a seriousness about him.”

After major wars, such as the Civil War, the First World War and World War II, “there’s always an uptick in men who join religious orders,” he says. “Why? It happens because men need to redeem themselves for the sacrifices they made on the battlefield.”

McKenzie counts Francis among those seeking such redemption.

“I think Francis himself was looking for something like that, and I think many of the men who gathered around him were his war buddies and they had a common goal – to redeem themselves.

“Francis was asked to do some awful things. I think he had PTSD and we have an order because of it.”