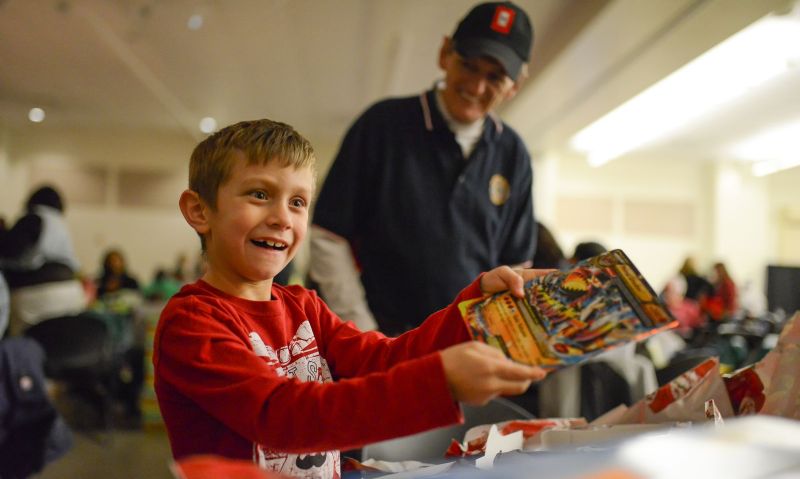 As the holiday season continues to ramp up, American Legion posts and their Legion Family members are among those individuals and organizations who look to assist those perhaps needing a little extra help this time of year.

One post also is stepping up to help those impacted by a tragedy. This year’s Christmas party in Paradise, Calif. – first started by American Legion Post 259 four years ago – provided an early Christmas for the children who survived the 2018 Camp Fire.

Post 259, the Paradise Host Lions Club and the Paradise Veterans Group teamed up to raise more than $8,000 to buy over a thousand gifts for local children this holiday season. The event took place at the Veterans Memorial Hall in Paradise.

And at St. Peter American Legion Post 37 in Minnesota, the post is hosting a different kind of Christmas party, one that focuses on helping children with special needs – specifically those with autism.

According to KEYC, the post is hosting a Sensory Santa Visit on Dec. 21. Children with special needs can enjoy a visit with a disability trained Santa in a sensitive and calm environment, with games there designed specifically for them.

Abby Baker, a mother of two children with autism, praised what the event offers. “For special needs parents, especially when they are going to a typical event, it can be so chaotic,” she told KEYC. “And your child can be so sensitive to things, every child with a disability is different. And so you never know if your child will react to a large crowd or whether the lights and sounds will be too much for them.”

The following are some of the events and assistance American Legion Family members are providing across the country as the nation celebrates the holiday season.

The Riders provided an escort when the cart was delivered during the home’s Christmas party, along with presents for the residents. With the cart, the veterans will have easy access to the home’s campus.

“Some people thought it would take a year to raise the money, but thanks to some generous donations, we did it in seven weeks,” Chapter 132 Legion Rider John Madaloni, coordinator of the fundraising effort, told tucson.com. “As veterans, it is our way of giving back. Lots of us didn’t get some things we should have been entitled to or receive acknowledgment that we should have, and that is what The American Legion is all about: It is veterans helping veterans.”

In Litchfield, Morgan-Weir American Legion Post 27’s annual food drive resulted in food being provided to 71 families. Thousands of perishable and nonperishable food items were donated and then distributed to families of limited financial means. So much food was donated that some will be delivered to local food banks.

“It’s a true community effort,” Auxiliary Unit 27 member Jane Bonville told the Republican American. “The Boy Scouts and the State Police Explorers help out, and the Litchfield-Morris Rotary Club was a major contributor.”

The families benefiting from the drive were identified by the town’s social services department and the Litchfield school system’s social worker.

Additionally, food and personal items were collected through the post and the Rotary Club to send to Auxiliary Unit 27 member Christine Shortsleeve’s son’s military unit. Her son, Evan, is on a nine-month deployment with the Army’s 82nd Airborne Division at Bagram Air Force Base in Afghanistan. The post was able to send 21 boxes of collected items overseas to Evan and his fellow soldiers.

“They were all elated,” Shortsleeve told the Republican American. “They couldn’t believe how much they received and were very appreciative.”

Continuing what has become an annual tradition, Morris-Little American Legion Post 6’s Legion Family in Milledgeville provided donations and volunteers for the Joy Shop for the residents at the Georgia War Veterans Home. The shop allows the home’s residents to shop for gifts for their friends and family and travels to each of the state’s veterans homes. Auxiliary Unit 6 raises money all year long, as do other Auxiliary units. The donations help buy gifts for veterans to choose from.

Glenda Kohlhagen, one of the newest members giving of her time as a volunteer with the Morris-Little American Legion Post, also attended the two-day event, and helped where needed.

“We love giving back to our veterans, because they have given and done so much for us and our country,” Unit 6 member Glenda Kohlhagen told the Union-Recorder.

American Legion Post 101 in Mountain Home is working with Snake River Bros of Southern Idaho (SRB) to donate three holiday dinners for needy families in the area. Post 101 and SRB will present the families with the turkey dinners at Our Lady of Good Counsel Catholic Church.

• American Legion posts in Hendricks County comprising the Indiana Blue Star Committee are again assisting area military and veteran families with their annual Spirit of Christmas Event on Dec. 21. The committee is sponsoring 21 families this year comprised of deployed families, single-mothers and single-fathers serving, or veterans and Gold Star families.

• In Sullivan, American Legion Post 139 donated approximately 30 poinsettias to all of the veterans in area nursing homes, and hosted a Christmas party for the children and grandchildren of the post’s members and a holiday dinner.

American Legion Post 121 in Bardstown continued its tradition of distributing Christmas food boxes to about 80 local families, many of them veterans’ families. The post teamed up with Bread for Life Community Food Pantry, which identified 50 families in need; 30 families were identified through the local school resource centers.

Many items were collected through a food drive at local schools. Area businesses also provided reduced prices on items and donated to the effort.

Donato J. Laviola Post 139 in Lyndhurst provided a Christmas Party for special needs children, and will be providing $100 Shop Rite cards and $100 gift cards to 10 needy families in town. The post also will provide items to local veterans in senior homes.

“We’re making sure every veteran is taken care of and let them know they are not forgotten, they’re still a part of the military family,” Post 40 Commander Brian Sosnoskie told The Daily Item. “It’s up to us to continue this tradition.”

In La Crosse, American Legion Post 52 set up a Buddy Tree with the names of 100 area veterans. The community was invited to pick names and buy that veteran a gift.

"It's overwhelming what the generosity from the public and the community, other veterans, and other American Legion Posts. It just feels great," Post 52 Commander Josh Navrestad told News8000.

If your American Legion post and/or Legion Family is part of a special holiday event, please share the story and photos at legiontown.org.