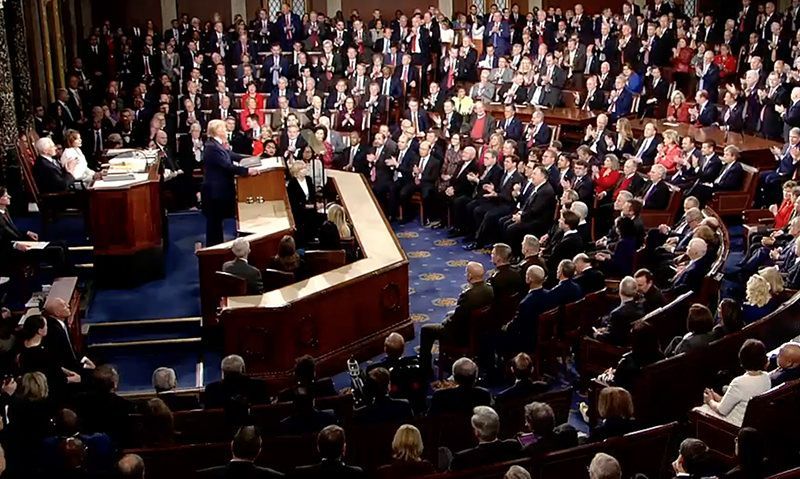 In his annual address to Congress and the nation, President Trump said the “state of our nation is stronger than ever before,” in part because, “our military is completely rebuilt with its power unmatched anywhere in the world — and it’s not even close.”

While the president did not address issues related to veterans care during the Feb. 4 speech, he discussed military spending, as well as recognizing the inspirational stories of some veterans and servicemembers in attendance.

“The United States has purchased all the finest planes, missiles, rockets, ships and every other form of military equipment, and it’s all made right here in the USA,” he said.

Among the guests in the president’s gallery were three veterans: Tony Rankins of Cincinnati, Paul Morrow of Montgomery, Ala., and Raul Ortiz of Del Rio, Texas, who works for the U.S. Border Patrol.

Rankins, an Army veteran, was the first guest pointed out by the president. The Afghanistan combat war veteran dealt with post-traumatic stress disorder (PTSD) and lost his family and job, and became addicted to drugs. Later he went to prison and was homeless.

The veteran turned his life around thanks to a job training program connected to Opportunity Zones in Cincinnati backed by administration programs. Now he works for a real estate company.

“He is now a top tradesman, drug-free, reunited with his family,” Trump said.

According to the White House, Rankins said, "I was empowered to rise from being homeless and facing addictions to the greatness that awaits every man for a higher purpose in our great country."

Toward the end of his speech, Trump acknowledged that “war places a heavy burden on our nation’s extraordinary military families,” singling out Amy Williams from Fort Bragg, N.C. Then surprised her by announcing that she won’t have to wait for her husband, Sgt. Townsend Williams, any longer as he made his way to her and their children, Elliana, 6, and Rowan, 3, in the gallery. “Welcome home, Sgt. Williams,” Trump said.

During his 80-minute speech, Trump focused on a variety of other issues related to the military, veterans and servicemembers. Among the topics covered:

• Terrorism: Kelli Hake, of Oklahoma, is a Gold Star mother. Her husband, Army Staff Sgt. Christopher Hake, was killed on his second deployment in Iraq in 2008. She was accompanied by their son, Gage, who was a 1-year-old at the time of his father’s death a dozen years ago. Military officials said Christopher Hake was killed by a roadside bomb connected to terrorist groups backed by Iranian Gen. Qasem Soleimani, who was killed in an airstrike ordered by Trump last month. “Our message to the terrorists is clear. You will never escape American justice. If you attack our citizens, you forfeit your life.”

• Islamic State: The president noted the progress, including the recent killing of Al-Baghdadi, a significant blow to ISIS.

• The Middle East: The president talked about working to stabilize and bring peace to the region. With reference to Afghanistan, he said, “We are working to finally end our nation’s longest war and bring our troops back home.”

• Space Force: Trump pointed out Iain Lanphier of Scottsdale, Ariz., a 13-year-old who wants to attend the Air Force Academy and later enter Space Force. Sitting next to Iain was Brig. Gen. Charles McGee, his great-grandfather and a 100-year-old Tuskegee Airman. “Charles McGee, our nation salutes you. Thank you, sir.”