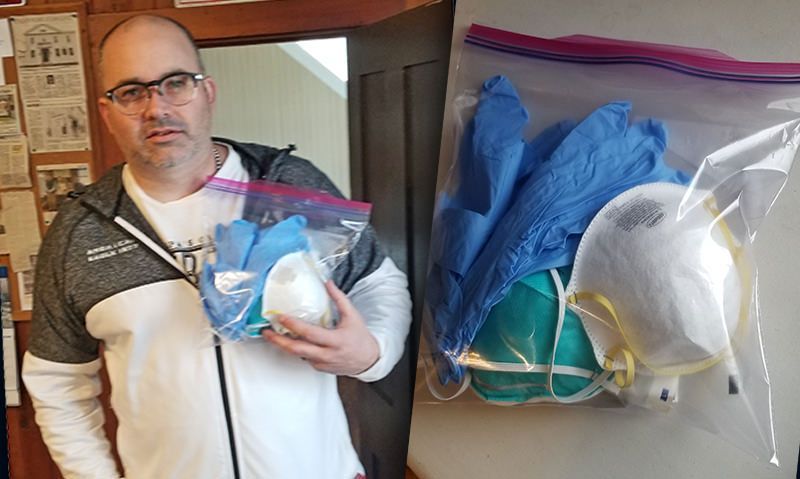 Dave Butkus had heard enough. The service officer at American Legion Post 146 in Bethlehem, Conn., had listened to government updates, and viewed social media posts, of health-care workers running out of supplies – masks, gloves and disinfectant wipes – that impacted their day-to-day efforts and personal health in the midst of the coronavirus pandemic.

So during his post’s weekly Friday afternoon get-together on March 20, Butkus floated the idea of staging a callout for those very supplies from the community. With the post concurring, calls for donations were placed on various Facebook pages in the Bethlehem area and neighboring towns.

What followed was an outpouring from the community, leading to dozens of nurses, EMTs and other health-care workers from various facilities throughout the southern half of the state getting critical supplies.

At the Friday meeting, Butkus said “This is what we’re here for. It looks like things are pretty serious here. We should be the first to act.”

After posting on social media, the post already had donations by 8:30 a.m. the following morning. "We are connected to a blue collar mentality in America," Butkus said. "We are the ones that have the outreach to the carpenters and the painters and the woodworkers who may have these (supplies) in their homes and wouldn't be thinking about them."

Post 146 wanted to cut through red tape and make the supplies available right away, which is why it set up a distribution center at the post and began assembling kits with the donations. Fifteen minutes later a local LPN came in to get supplies, telling the Legionnaires “I could really use this.”

Donations continued to come in, including one person anonymously providing 100 masks. The kits included three to five masks, gloves, gauze, wipes and cleaning supplies; by 11 a.m., Butkus said the word had gotten out about their effort.

Between 11 a.m. and 2 p.m. the post handed out 50 kits, distributing in those kits 250 masks and 1,200 pairs of gloves – all very much needed by the local health-care professionals.

“We were completely out (of supplies), so we realized what a big deal it was,” Butkus said. “The stories that came out from the people picking up (the supplies), they were nervous. They were out or getting ready to be out with no way to find the gear.”

Sue Ambadjes, a nurse in nearby Watertown, came to Post 146 after her workplace – the Glendale Center nursing home in Naugatuck – had run out of items such as masks. She left with a bag of supplies.

“I’m just on my way to work now and this will be a bigf help,” Ambadjes told the Republican American. “I will share these with the two girls I work with.”

Butkus said the reaction of those receiving the supplies were “thankful. When we should be the ones thanking them.”

Post 146 has continued to accept donations and is delivering more supplies, but is now suggesting that those wishing to provide help do so directly to the health-care providers. “We were just the middle man,” Butkus said. “But people have food and people need food, but they still go through a food bank. We just want to make sure we offer an outlet.”

What started as an idea quickly turned into a community groundswell. But for Butkus and Post 146’s 55-strong membership, it just made sense to get involved.

“That’s kind of what we’re here for, right?” Butkus said. “We have that duty and obligation to continue to serve as veterans."