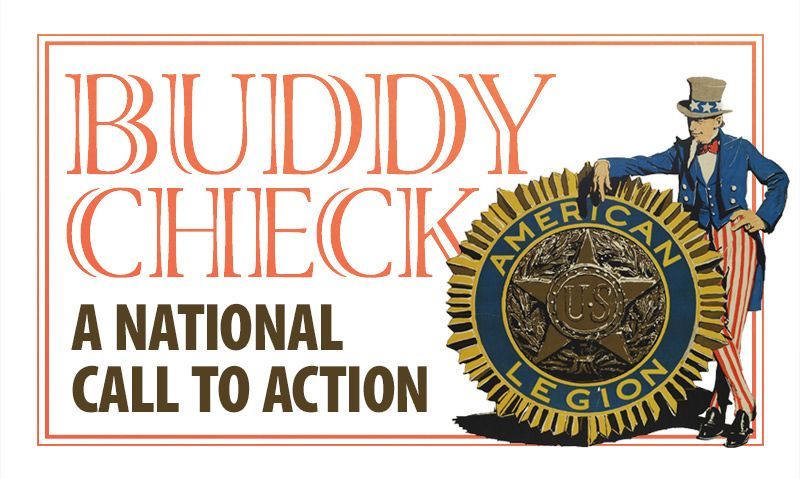 In January of 2019, then-American Legion National Commander Brett Reistad called on posts, districts, counties and departments to coordinate teams to call Legionnaires and former members simply to see how they are doing. Buddy Checks, Reistad said, were an opportunity to “ask if there is anything The American Legion can do for them.”

Department of Pennsylvania Legionnaire Leroy T. Lippi Jr. began doing something similar in 2018 – and has kept on doing it. Lippi, the service officer at Robert H. Hoke Post 272 in Linglestown, said he’s made 1,683 Buddy Checks since then. Included in that number are 438 since the coronavirus pandemic hit the nation and started stay-at-home orders and social distancing across the nation.

Lippi has made so many Buddy Check by phone that many veterans on the receiving end know it’s him before they answer the phone. “Believe it or not, they have my name and numbers in their phone,” he said. “When I call: ‘Oh, Lee Lippi, hello. How are you? It’s good to hear from you again.’ The gratitude they have for this is astounding.”

Lippi was first approached by then-Post 272 Commander Ken Stambaugh about calling the post’s 850 members to see how each was doing. Lippi said it initially was an “enormous challenge” and he started by developing a script for the phone calls. Each call started with an introduction and mention that the call was on behalf of the post’s entire American Legion Family.

Lippi would ask if there was anything the member needed, including help with Department of Veterans Affairs. Lippi left each Buddy Check with his phone numbers and email address “should a future need arise.” He also thanked each veteran for his or her service, and offered a “welcome home” to Vietnam veterans.

Making the calls in groups of 25 or so, Lippi said the normal reaction ranged from a pleasant surprise to “awestruck” that someone from the post had reached out. Before the national Buddy Check program began Lippi had made 850 calls. Of those, 63 were referred to the Department of Pennsylvania headquarters for further benefits assistance and other questions.

Lippi is especially pleased that he’s received 250 return calls from the Buddy Checks from Legionnaires requesting additional information or assistance. And over the course of all of his calls, he’s connected people with care at the Lebanon VA Medical Center, checked on members living in nursing homes and even “taken people here and there for doctor’s appointments.”

Since the coronavirus pandemic hit, Lippi has been hard at work making calls, but he said he’s not alone. According to Lippi, Post 272 Commander Rod O'Connor has made another 162 calls. Their efforts, Lippi said, resulted in finding out no one in Post 272’s Legion Family have experienced any COVID-19 symptoms.

“My main goal in all of my calls is to ensure upon them that if they need assistance in any way … I just want to let them know that we are out there for them and for their needs,” Lippi said. “If we can provide the service, I’m going to do that.”

Lippi’s efforts have earned him the department’s Post Service Officer of the Year Award, as well as the opportunity to speak before the Department Executive Committee in January of this year. He’s also made Buddy Check presentations within the state on multiple occasions.