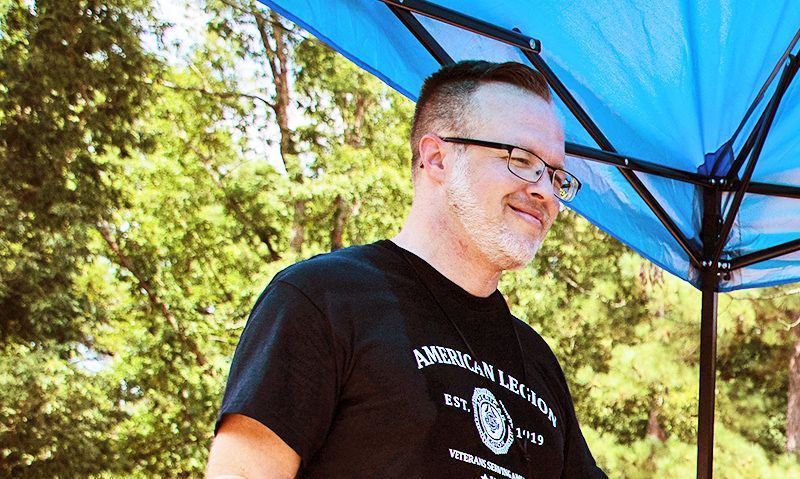 As the co-founder and president of a small business, North Carolina Legionnaire Scott Quilty understands that a disruption in revenue can create major headaches. So as the coronavirus pandemic began to develop and states began to mandate social distancing, Quilty knew there would be a negative impact on the small businesses in his town of Fuquay-Varina.

That led to the launch of the Angel Fund, a community fundraising project started by Quilty to raise money to assist the local business community. Over the course of 14 days, Quilty and others were able to raise $121,000 that has been disbursed as targeted grants for Fuquay-Varina small businesses. The money is being used to pay rent, help with payroll and other critical operating expenses.

The Angel Fund actually kicked off prior to North Carolina going under a stay-at-home order, showing a bit of clairvoyance on the part of Quilty, American Legion Post 116’s Americanism & Youth Programs chairman and a U.S. Army veteran who lost an arm and leg to a roadside bomb in Iraq in 2006. “It was pretty clear that small businesses were going to take a hit in this crisis,” he said. “You have this whole health crisis that is developing, and there are lots of people surging to address the health crisis. But it comes on the back of this economic crisis that we’re starting to experience now.

The Angel Fund launched March 18, thanks in part to a donation of $2,000 by Quilty and more donations from his friends. But as word of the campaign spread – through various forms of communication, including a strong presence on Facebook and daily emails – the fund began to grow.

A $25,000 donation from Bob Barker Company, the nation’s largest detention supplier whose headquarters are based in Fuquay-Varina, helped the cause, as did opening up online donation. The goal had been to raise $100,000, but donations kept coming in – to the tune of $121,000 by the time the campaign ended on April 1.

“We found many of the typical folks that would have given were disproportionally impacted by the crisis,” said Quilty. “They were in industries that were shut down. But what we found was that there were industries that were still humming along … and realized this was their opportunity to make an impact on Main Street.”

After the campaign closed the Angel Fund was able to provide enough funding for 56 grants to local, independently owned small businesses, who used an expedited application process to seek the grants.

Including among the donations was $1,000 from Post 116, which at the time had no revenue sources because of social distancing but became the first civic organization to contribute to the fund. “(Post 116) said ‘we are in a strong financial position moving into this crisis, and we are taking care of our members,'” Quilty said. “But our members are all members of this community, and they want to support the small businesses here. And lots of post members personally contributed.”

Quilty said as he was getting the project off the ground he turned to Krista Abshure, Post 116’s Public Relations chairman and an Air Force veteran. The cause struck a chord with her immediately.

“We have an office in downtown Fuquay, and I am from a really small town in Pennsylvania,” said Abshure, the broker-in-charge at Fathom Realty and the owner of the Abshure Realty Group. “I think just realizing these people really live month to month … everyone always comes to the small-town businesses for support when there are functions in town. The fact (the Angel Fund) was finally going to give the community a chance to support them back was important to me. And also know that month that they’ve been closed is super impactful for them financially, that could be the difference whether they can stay open or close permanently.”

Abshure, Quilty said, was critical in “working behind the scenes and leading our outreach to the homebuilders in our community. I bought my house from Krista when I first moved to Fuquay, and we both joined the Legion around the same time. When the fund first started to take shape, Krista was one of the first people I reached out to for help, and she jumped in with both feet. I could not have done it without fellow Legionnaires like Krista.”

But Abshure is quick to point the credit right back at Quilty. “This could not have been completed without his leadership,” she said. “He was hands on the ground. He created the majority of the documentation for it. He was THE source in push for all of it, and without him it never would have happened. There’s no doubt in my mind it wouldn’t have happened.”