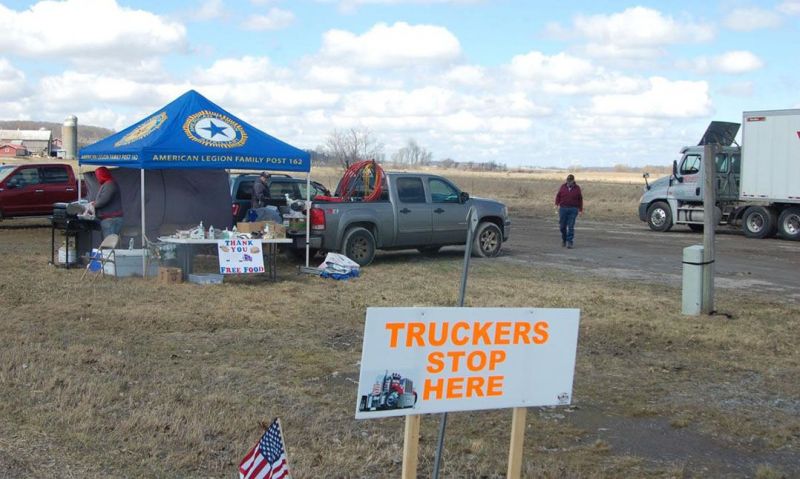 Truckers traveling through the intersection of NY 177 and NY 12 on April 1 were given a pleasant surprise: a free lunch, courtesy of the American Legion Family from Post 162 in Lowville, N.Y. Free grilled hot dogs and hamburgers were handed out to a group of the U.S. workforce putting in hour after hour moving critical supplies across state boundaries as much of the nation has been shut down because of the coronavirus pandemic.

The post set up a grill and tent along the intersection, along with signs saying “Truckers Stop Here” and “Thank You Truckers Free Food.” At the stop, truck drivers were given hot dogs, hamburgers, chips and a drink before heading back out on the road – all while the volunteers followed social distancing guidelines.

Post 162 Commander Lee Hinkleman said the idea for the lunch stop came about when a few members of the post’s American Legion Auxiliary unit referred to truckers as “'the silent heroes.' You really don’t see those guys. They’re behind the Walmart, behind the grocery store, doing their thing and just going about their business.

“Here in New York they’ve actually shut down a lot of the rest stops where truckers in the past could take a rest and (eat) something they picked up somewhere. So the accessibility they used to have they simply don’t have now.”

Post 162’s entire American Legion Family got behind the project, which is how Hinkleman said every project is approached by the post.

“The response (from 162’s Legion Family) – we had too many volunteers,” Hinkleman said. “I’ve been actually turning volunteers down.”

The recipients of the food “were ecstatic,” Hinkleman said. “They were saying the same thing: That people really don’t know that they’re there, still working behind the scenes, taking care of us, delivering the supplies. The response has just been phenomenal.”

West Virginia trucker Eric Robohm was hauling cleaning chemicals for food companies and pulled into the stop for lunch on April 1. “I think it's very good for morale, it's very nice to know that people are behind you, and that you have support for what you're doing," Robohm told WWNY 7News. “It's just a kind gesture. It's very appreciated.”

Members of the community have donated to the cause, as have those well outside of Lowville. “We actually had a VFW Auxiliary an hour away from us send us a check for $1,000,” Hinkleman said. “I was like ‘wow.’”

On April 7 the post’s Legion Family again set up at the same location, this time providing lunches for both truckers and any law enforcement traveling the route. “The state troopers were thrilled,” Hinkleman said.

Hinkleman believes between 150-200 hamburgers and hot dogs have been given out so far. Another effort is planned for next week for employees at Walmart and Tops Friendly Market in Lowville. The post again will pay for all the food.

“It’s just something we want to do,” Hinkleman said. “We want to be able to give back.”

Despite the nation’s focus on the coronavirus, American Legion posts in New York and Nebraska haven’t forgotten what this Sunday is. In Nebraska, American Legion Post 27 in Beatrice is offering a drive-thru Easter egg hunt on Saturday for children ages 9 and under. Families will drive through the parking lot of the Veterans Club, where Easter bunnies will hand out treats.

And in Sherrill, N.Y., American Legion Post 230 will drive the Easter Bunny around the city on Saturday. Local residents can track the Easter Bunny’s route on the city of Sherrill website at www.sherrillny.org. The route will update regularly and have a slight delay.

The following is a round-up of what some other American Legion posts do to continue to serve their fellow veterans and communities during this difficult time.

The Green Valley Justice Court found itself short of bailiffs after the Sheriff's Auxiliary Volunteers – who typically performs bailiff duties at the court – were withdrawn from the court and other areas where they interact with the public because of the coronavirus outbreak. The court enlisted the American Legion Riders and the Arizona Rangers' Madera Company to handle the bailiff and security duties.

"A lot of our Riders are retired combat military, military police or law enforcement," American Legion Madera Post 131 Commander Dan Cady told the Green Valley News. "We got an eclectic group of law enforcement and once it was mentioned, they stepped up. We're happy to help the community in any way that we can.”

In Riley, American Legion Riders Chapter 328 hosted a drive thru barbecue dinner on April 4. The Riders cooked 100 pounds of pulled pork and with several sides. Anyone was welcome to come out and pick up as many meals as they needed for free.

Chapter 328 Assistant ALR Director Brandy Jackson told WTHI-TV it was the Riders’ way of giving back to the community during this uncertain time. “This was for the veterans. This was for the EMT’s, the first responders, the police, firefighters and shut-ins,” he said. “We had a lot of people come that said it wasn’t for them, but they were delivering the meals to people who were shut in. That was great for us.”

Brainerd American Legion Post 255 teamed up with the Crossing Arts Alliance, and Raboin and Francis Law Firm to put together decorated paper bags filled with art supplies for children picking up weekend meals at Baxter Cafe & Catering. The project provided 200 creativity kits for children ages 14 and under.

Each kit contained a set of crayons and a coloring sheet featuring the “You Betcha” mural in downtown Brainerd, along with a variety of other materials such as mosaic stickers, pine cones, mini pompoms, seashells and googly eyes. Each paper bag had drawn on it an original piece of art from a local artist.

• The Rochester Veterans Outreach Center put out the call for supplies for its Quartermaster program, which gives needy veterans food, toiletries, clothing, and other supplies. American Legion Greece Post 468 answered the call, with its last-minute food drive filling half a trailer full of supplies. “During these times, people are getting laid off,” Post 468 Commander George Dadson told Spectrum News. “The money’s not there. The food’s not there. But they still need to feed their families.”

American Legion Post 301 in Austintown teamed up with the Youngstown Community Food Bank and Feed the Children Network to collect and distribute much-needed produce for area residents. The effort assisted 200 families, with the extra food went to a local church.

American Legion Post 43 in Tullahoma used the media to get the word out about Buddy Checks. In an article in the Tullahoma News, Post 43 Commander Alan Harris said “This year, given the worldwide threat posed by COVID-19, our 'Buddy Checks' have taken on a new significance and naturally has gained a great deal of momentum. For Post 43 in Tullahoma, this equates to over 200 personal calls, emails, home visits, and letters being made to ensure our veterans and their families are taken care of. If they have a need, we have some simple but effective means to respond. Our local Boy Scouts, for example, have volunteered to help deliver supplies and medication to those veterans who need assistance. Other local groups such as THS JROTC and the local Hands and Feet Ministry have also offered their services.

“In all reports received thus far, the reaction has been very positive. Our veterans and their spouses are very appreciative knowing that someone cares about their well-being and needs. As you might expect, our core membership is, for the most part, in their 60s and beyond; mostly Vietnam-era veterans who will likely be needing increased medical attention. We also contact all veterans we know, regardless of their membership in our post. It is, after all, why we as an organization exist. Taking care of veterans by lobbying for a dependable VA healthcare system, advocating for a strong national security and strong defense, promoting Americanism through programs such as Boy Scouts and Boys State/Girls State and promoting respect for the American flag, and investing in our youth by helping to maintain family integrity and eliminating child exploitation are the four pillars on which The American Legion is built.”