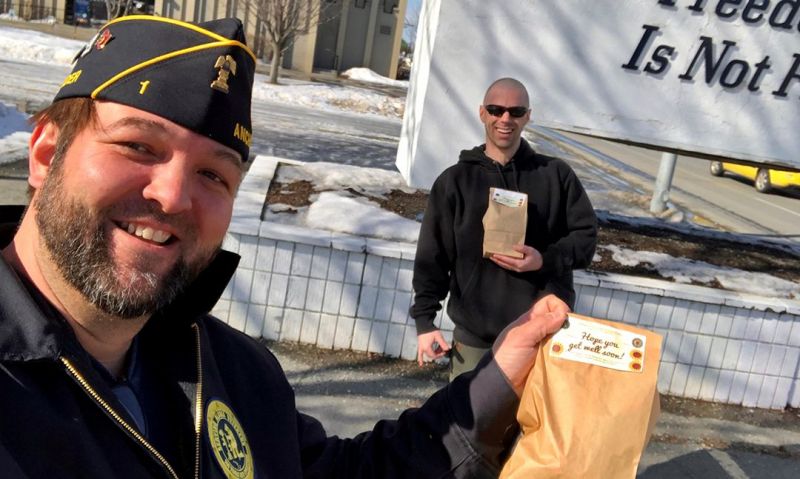 National stay-at-home orders, along with self-isolating and social distancing, have provided an opportunity for American Legion Family members to show just how capable they are when it comes to stepping up for others amidst a crisis.

The Department of Alaska American Legion Family has shown the same resolve and support in a variety of ways, something Department Vice Commander Michael Downs realized when he started checking on his state’s coronavirus relief efforts.

“When I did start hearing folks doing stuff and (I) started to reach out to some people, they were talking about trying to do more – ‘what can we do?’ Trying to find our role,” Downs said. “I think that’s super important.”

That support includes efforts at American Legion Jack Henry Post 1, where Downs is commander. In addition to performing Buddy Checks to nearly 100 members by the end of March, Post 1’s Legion Family also delivered some much-needed snacks to active-duty military in the area. Through one of its members who serves on active duty at Joint Base Elmendorf-Richardson (JBER), the post learned that “a bunch of people are being quarantined (or were going to be quarantined) in the barracks,” for precautionary measures, Downs said. “These are folks that don’t have families. They’re being quarantined in the barracks because they may have come in contact with somebody (with COVID-19). He didn’t give us an exact number, but he said ‘if you did 100 goody bags you’d probably have it covered.’”

That’s what Post 1’s Legion Family did, putting together bags of “a bunch of junk food that young, healthy airmen and airwomen can eat,” Downs said. “Our goal and vision at our post is to really reach out to those guys. We’re really trying to make that connection.”

The assistance from the Alaska Legion Family extends beyond Post 1.

In Seward, American Legion Post 5 has been making protective masks for members of the community, providing free meals, sharing situational updates from the city of Seward via social media, and offering rental assistance to some community members who lost their jobs.

American Legion Post 15 in Palmer also has been doing Buddy Checks, while Auxiliary Unit 15 prepared breakfast burritos and then delivered them to students in need at Wasilla Junior High School. The effort included several members of the Junior Auxiliary helping out. And in Anchorage, Spenard Post 28 is making Buddy Checks, and offering assistance with running errands and grocery shopping.

‘It really means a lot.’ In Valhalla, N.Y., American Legion Adolph Pfister Post 1038 Legion Family members have been performing Buddy Checks on local veterans, including those at-risk, as well as local senior citizens. The post also is donating, shopping for and making food deliveries for those self-isolating or unable to go out in public because of health risks. And just last weekend a Post 1038 member delivered much-needed medication to a Legionnaire isolating with his wife, a member of Auxiliary Unit 1038.

“Even though it’s small, guess what: For this family, it really means a lot,” Post 1038 Commander John Creskey said. “It’s a real challenge for folks around the country, and around the world, and everybody’s doing the best they can. We’re pleased as the local post to be able to do this stuff.”

Post 1038 has grown its membership every year since 2012, in part because Creskey said its relationship with its community is strong. “We never stop bonding with the community, whether it’s with Scouts or Americanism or needs, etc.,” he said.

Once again, we are proud to share what American Legion Family members throughout the United States are doing to support their fellow veterans and communities during the pandemic.

The department’s entire American Legion Family has come together to raise funds for military families facing financial difficulties during the pandemic. The department’s Emergency Response Committee, working with posts, has raised $15,500 to donate to the Family Readiness Group of the Arizona National Guard to assist military families needing help.

Through the efforts of the FRG and with their hard work, they are finding military families that need help.

The Arizona Legion Family also is working with Harvest Compassion Centers to provide food for veterans and their families in need. And through April 12, the department’s Legion Family sponsored live-streamed art classes through Heal Her Art (By Women Veterans, For Women Veterans), which was founded by American Legion Auxiliary members. Veterans, their families and children were invited to join the art classes on Facebook at @HEALHERArt.

Got a Buddy Check call yesterday from my Post (359, Port St John, Fl). How timely, as we are dealing with advanced Cancer and yesterday was an especially trying day. What a difference that simple call made! Thank you!!

In Urbandale, Harold Jacobs wasn’t able to have a 102nd birthday party because of social distancing, but others – including American Legion Post 663 – made sure it was a birthday to remember for Jacobs.

The post joined up with the Urbandale Police and Fire departments, the VFW, Mayor Bob Andeweg, and Jacobs' family and friends organized a parade that started at the Urbandale High School football field and passed by Jacobs’ home on 70th Street.

• In Northborough, a shortage of personal protective equipment due to the coronavirus pandemic led to Vincent F. Picard American Legion Post 234 constructing and donating face shields to health-care workers. Post 234 Commander Rick Currier learned how to construct shields that cover the entire face through an online tutorial forwarded to him by his daughter, a New York City dentist. “We’ve been doing community service for as long as I can remember,” Currier told the Community Advocate. “I can’t consider not doing it. Now, we’re helping people who are helping other people.” The post already has delivered 60 masks to area hospitals and health-care facilities. “I have so much respect for these first responders – many of them are young with spouses and kids,” Currier said. “I sometimes cry when I see what they have to go through. And they’re doing it day in day out.”

• In Granby, American Legion Post 266 is donating care packages to residents of the Soldiers’ Home in Holyoke who were moved to the Holyoke Hospital due to a coronavirus outbreak at the home. The post also is collecting items for airmen from Barnes Air National Guard Base in Westfield, who have been working at the Soldier’s Home and staying at local hotels during their duty. The post is collecting games, snacks and drinks and will deliver the items April 16.

American Legion Riders from Earl C. Hill Post 550 in Bloomington were part of a group of motorcyclists who honored Operation Iraqi Freedom veteran Mitch Olson. On March 30, Olson died by suicide; social distancing prevented his family from having a full military honors funeral.

But on April 11, Chapter 550 American Legion Riders from joined with other motorcyclists from the Combat Veterans Motorcycle Association and the Veterans of Foreign Wars followed behind fire trucks to pass in front of Olson’s parents. The group then traveled 30 miles away to Coon Rapids to ride past Olson's wife and home.

“Every veteran should have an honor guard,” Legion Rider Paul Hassing told KARE11.

• In Springfield, members of American Legion Post 69 and the 40 & 8 have been giving away school supplies to help families dealing with homeschooling. They’ve delivered more than 250 boxes of pencils, glue, rulers and other supplies to anyone who needs them. "The country is going through a hard time right now, and it just shows that us, as Americans, us as veterans, are here to support one another. Not only veterans, but the community," American Legion Post 69 Adjutant Steven Wilcox told KY3. "Education is very important because the children don't know unless they experience things and are taught we can get through something like this.”

• In Sikeston, Henry Meldrum American Legion Post 114 First Vice Commander Shawn Goodman wanted to do something to demonstrate the community’s unit in the fight against the coronavirus. So he and his son raised a 30x40-foot U.S. flag at the post.

• In Black River, Auxiliary Unit 673 has been making meals for the elderly residents of Kamargo Apartments and will be doing so every week through April.

In Chesterfield, Maj. Charles A. Ransom Post 186 has for two weeks given space to the nonprofit Feed our First Responders (FOFR) and its half dozen volunteers to prepare 350-plus meals a day provided at no cost to first responders at area hospitals.

FOFR founder Deborah Tokarz reached out to Post 186 leadership to get use of the facility’s kitchen. “We saw a need for the community as well as veterans to help and we boldly accepted Tokarz offer to help," Post 186 life member Charles Miller told NBC 12. “The American Legion is here to serve our community so that’s what we’re doing."

More than 5,000 meals have been prepared for the hospital staff.