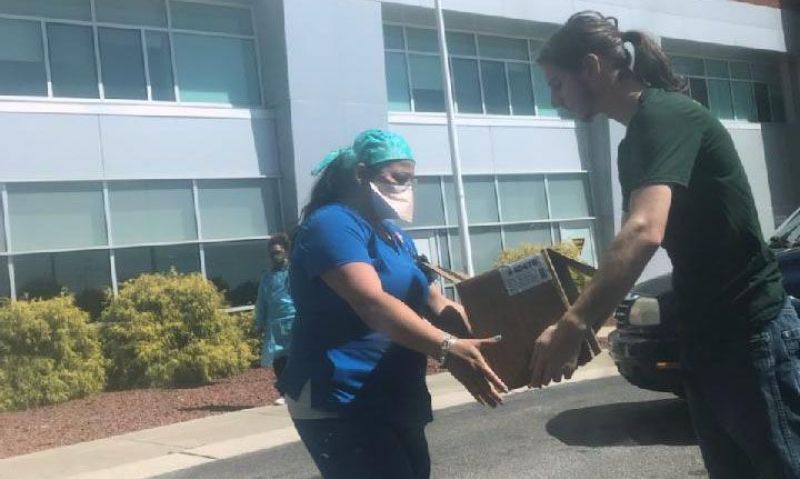 Hair and Matthews Post 32 in Hope Mills, N.C., conducted a regular food and clothing distribution to those in need on Tuesday prior to the coronavirus pandemic leading to a statewide stay-at-home order.

But with the post closed, a handful of members of its Sons of The American Legion squadron found a way to continue to help out others who may be in need of food.

Those Sons members also are a part of the Boy Scouts of America Venturing Crew 32, which also is sponsored by Post 32, and have been with their fellow Crew members distributing the post’s donated food supply. On five occasions so far the Venturing Crew has delivered food to those the stay-at-home order deems essential: health-care workers.

High school senior Duncan Harling, a two-term Squadron 32 commander, is a crew guide and vice president of administration for the Southern Region Venturing Area 7. His older brother Connor previously has served as the squadron’s commander and also is a three-time participant in the Department of North Carolina’s Oratorical program. And Charlie Thoele also is a duel member of both the Sons and the Venturing Crew.

Duncan has been involved with the Sons of The American Legion since he was 12 and said the Venturing Crew was cleaning up Post 32’s property just prior to the statewide order came into effort when the idea to resume the food distribution came about.

“We had a whole bunch of stuff planned for (March and April),” Duncan said. “We were chatting a bit and, honestly, just figuring out what we were going to be doing for the next two weeks. Our post had already gone and canceled all of their (activities), and we were just trying to figure out what was happening.

“I started to think about the weekly food drops the post had done and what was going to happen to all of that food that was just sitting there. I didn’t see any reason for the drops to stop.”

Duncan said the idea of distributing the food was to “engage in a little bit of Robin Hood.” Venturing Crew 32 started by delivering baked goods to local emergency rooms and small clinics, “and now it’s become a regular occurrence,” he said. The effort has expanded to surrounding counties.

Lyles said what the Sons members of Venturing Crew 32 are doing is what the post’s American Legion Family tries to stress. “It makes me feel proud,” he said. “At our post we try to teach unity so that we can work together and go out and help other people. And they stepped up 100 percent to help us accomplish this deed we’re trying to do.”

Duncan said the recipients – nurses, doctors and health care providers – are thankful for the effort. “It’s been overwhelmingly positive,” he said. “And we’re probably going to do this until quarantining is over.”

Along with what the members of Sons Squadron 32 did with the Venturing Crew, American Legion Family members have also delivered support, supplies and meals throughout the country, continuing what has become the norm since the coronavirus pandemic hit. The following are just a few more examples.

Six American Legion Family members from Post 11 in Florence have been hand-sewing masks for local health-care workers and veterans who are in the high-risk category for the coronavirus. In the past few weeks the group has assembled more than 900 masks.

Auxiliary Unit 11 President Trish Montgomery said the group of women will sew until the need for masks is met. “We are a volunteer organization and we’re just helping anyone that has a need, our veterans, our nurses – anyone that needs,” Montgomery told WHNT News.

American Legion Post 25 in El Centro has set a goal of accumulating more than 1,000 masks or face coverings to distribute to the community. The post’s Disaster Preparedness and Response Team was activated after the coronavirus pandemic broke out and looked for a way it could help the community.

“The American Legion is based on four pillars, and one of them is to take care of the community,” Bob Candland, a member of the Disaster Preparedness and Response Team, told the Imperial Valley Press. “We thought about what was the best way we could help, and we decided to see if we could make the masks.”

More than 300 masks have been assembled so far.

“We are part of this community, and the community is part of us,” Past Post 25 Commander Tracy Rascoe said. “In The American Legion we come from the military, so we all understand the importance of the supply chain. In the military, we work in concert to make sure supplies get to our soldiers. Here, the soldiers are those working on the front line to help each community.”

• In New Milford, American Legion Post 31 Commander Jeffrey McBreairty saw through both the news and social media that local first responders and health-care workers were short on supplies. He went online and found the type of gloves needed – 700 total that were donated to New Milford Hospital. “We are so very proud of what all (first responders) are doing and we applaud them on the dangerous tasks that are at hand for them,” McBreairty told the Wilton Bulletin. “We wish them well, we wish all the patients well.”

• Southington American Legion Post 72 continues to function through remote meetings while continually checking for phone messages twice daily at the post to see if any veterans are needing assistance. “We can help them out with groceries and errands if they need help,” Post Commander Norm Giroux told the New Britain Herald. “If they need financial assistance or fuel or groceries we can also connect them to the right groups.”

In Brazil, Post 2’s American Legion Family already has provided two free Friday lunches – ham and beans, and pulled pork – to anyone in need of a lunch. The post has set up drive-thru service and will provided a homemade chicken and noodle lunch this Friday.

After stay-at-home rules canceled his birthday party, a local 7-year-old who beat cancer a year ago was given a community celebration under social distancing rules that included a parade of 88 vehicles, 55 motorcycles and dozens of law enforcement officers and first responders passing in front of his home.

Among those participating in the parade were American Legion Riders from Roscoe Enloe Post 5 in Jefferson City. “Even though we have a day with the current situation where we can't have a party for him with everybody coming together, we can at least go by and bring a smile to this young man's face and show him that we care,” Legion Rider Bill Plate told ABC 15 News.

American Legion Post 118 in Rio Rancho joined together with the Veterans of Foreign Wars and the Marine Corps League to provide Chick-fil-A meals to hospital staff at the Presbyterian Rust Medical Center. Post 118 donated $200 to the effort.

In Adams, Sons of The American Legion Squadron 586 partnered with the South Jefferson Rescue Squad to deliver a free meal to hundreds of area residents. Squadron 586 cooked and the rescue squad provided the sides for 500 barbecue chicken meals. Cars lined the street waiting to pick up meals.

“As you can see, we’ve got a pretty good crowd here today,” Sons of The American Legion Squadron 586 Commander Christopher Lyndaker told WWNY. “Lines show me that there’s need in the community.”

American Legion Col. Jennings Post 175 in Fort Jennings has been providing lunches for children in need. Parents can order a lunch by 10 a.m. every weekday and pick it up free of charge during the lunch hour.

American Legion Howard Maxey Post 72 in Ada teamed up with KFC to provide 20 meal boxes to help those in need. KFC is donating meals nationwide, and the local restaurant reached out to Post 72 to help distribute the food.

“I was contacted by Howard Stone from S.C.O.R.E. Broadcasting and Mr. Sanders from KFC,” Post 72 Commander James Kercheval told The Ada News. “They had 20-piece meals they were allowed to donate. They asked me to contact families and organizations to get these meals passed out.”

Recipients picked their meals up via a drive-thru method at Post 72 in order to maintain social distancing.

After Vietnam veteran James Hallock passed away, his family found out there would be no large ceremony or traditional military honors at his funeral because of social distancing. So Hallock's daughter took to Facebook to request help from local veterans groups.

Chazz Baker, a member of Gardner Warner Post 154 in Montrose, told WNEP-TV that Hallock got the funeral he’d earned. “It was a very good sendoff for James, who definitely deserved it,” Baker said.

Members of American Legion Auxiliary Unit 517 in West Tawakoni have spent the past month making protective masks that they are giving away at no charge to local fire and police departments, two medical facilities, a gas station and local residents. The unit has given away more than 600 masks so far.

“Almost all of the materials we use are donated, so we provide the masks for free to anyone who needs one,” Unit 517 President Kathy Rushing told the Herald Banner. “We’re also trying to give masks out to veterans in the community and their families.”

The District 1 American Legion Riders wanted to do something to show their appreciation and support for nurses at Froedtert South Hospital in Kenosha. The Riders donated their own money and got enough additional assistance from Spanky’s Bar in Kenosha and Red Oak Restaurant in Bristol to provide 100 sandwiches to the health-care workers.

“I thought, ‘We can do something.’ These guys are putting their lives on the line,” American Legion Riders Chapter 171 member Jim Rosko told the Kenosha News. “I got a hold of the executive board, and everyone agreed it was a good idea.”

American Legion Bicentennial Post 1976 in Annandale has teamed up with Old Blue BBQ to provide box lunches for veterans in need.