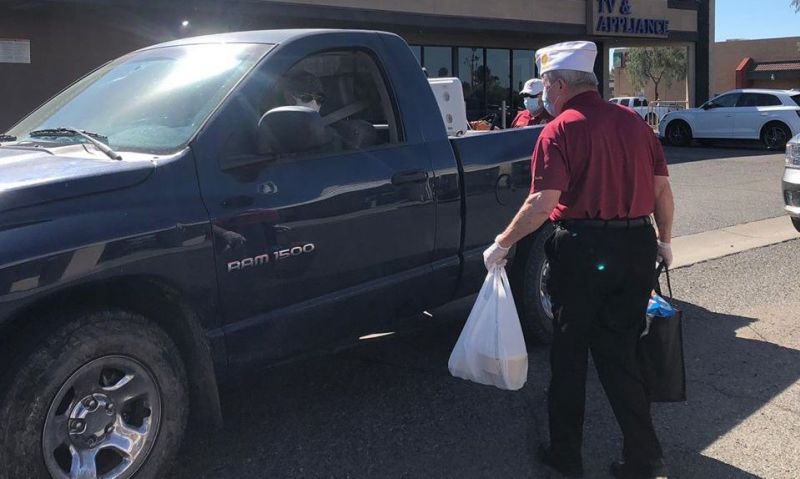 What started as a statewide discussion about what the Department of Arizona American Legion could be doing to help veterans impacted by the coronavirus pandemic has led to a grass-roots effort to provide food for that very group.

The department's District 11 and 12 American Legion Family have come together to partner with the Harvest Compassion Center in Phoenix for four food distribution efforts geared directly for veterans in need.

The Food for Vets program provides bags filled with frozen, refrigerated and non-perishable food, and hygiene products through a drive-thru setting at the center. Incoming District 11 Commander Bobbie Kimelton said by the time the effort is over, 10-12 such events will have been conducted.

“I sent (Harvest Compassion Center) an email and said ‘would you be interested in … partnering with us to have a day specifically for vets,'” said Kimelton, commander of Eugene C. Yount AZ Post 145 in Peoria. “They were very amenable to that idea. That became the concept of Food for Vets.”

The effort has taken place both on the east and west sides of Phoenix and already is expanding to other parts of the state. And volunteers will make food deliveries to those veterans who cannot make it to the drive-thru.

Districts 11 and 12 funded the project on behalf of the 40 posts within the two districts, but Kimelton said donations have started to come in to assist with the project.

“I think the thing that was most exciting for me out of all this is that this has become not an American Legion thing,” Kimelton said. “It is a Legion Family thing. We have (American Legion) Riders delivering food to the (Northern Arizona VA Health Care System) in Prescott. They’ve been delivering food bags to the Hopi Reservation and the Navajo Reservation. It’s just blown up into a huge, huge thing.”

In Ogden, Utah, the Baker-Merrill American Legion Post 9 Legion Family also conducted a food drive to replenish local food pantries. On May 1, Legion Family members gathered at the post to collect food from noon-6 p.m., practicing social distancing, and wearing masks and gloves. Donors didn’t have to leave their cars to drop off their items; the post also offered pick-up services for donations.

The food was delivered to the Catholic Community Connection Food Bank in West Ogden.

Minnesota Post 96 Staying Busy. The coronavirus hasn’t slowed down the efforts of American Legion Post 96 in Hutchinson. Post Commander Tim Burley said the post’s American Legion Family has been assembling around 1,000 face masks and delivering them to the state’s veterans homes, as well as to an organization that distributes them to homeless veterans.

The post also partners with other veterans service organizations in the community for an annual Saluting Community Heroes event that raises funds for veterans’ direct need.

From their portion of the funds raised, Post 96 recently donated $15,000 to the Minnesota-based Eagle’s Nest Healing, which provides housing, meals and recovery services to veterans dealing with PTSD. Another $7,500 was donated to the Minnesota American Legion Foundation’s Funds for Hospitalized Veterans effort, which provides financial help to veterans and families in need.

The post also regularly conducts Buddy Checks and also covered half of the cost of yearbooks for Park Elementary School students.

The post’s efforts, and those of others throughout the state, “are an example of what vets do best: adapt and overcome,” Burley said. “We love each other. We’re veterans, and we’re all in this together. Let’s fight together. And it’s really made a huge difference here.”

A ‘Community’ Stays Connected. Palm Valley Post 233 in Ponte Vedra Beach, Fla., started using Zoom for post meetings and regular updates after closing due to the stay-at-home order. But Post Commander Caroline Merillat said there was a need for even more communication within the post’s Legion Family, and now that communication outlet exists.

From 4 p.m.-9 p.m. daily, the post is hosting a Zoom Virtual Lounge, allowing its members to enjoy the pre-coronavirus camaraderie while safely social distancing.

“This is a pretty tight community,” Merillat said. “With all the people asking ‘When are you going to open?’ and the interest in the Zoom meetings that we’ve had, we thought it might be a good way for people to at least be able to still connect from their homes.”

The Virtual Lounge is an opportunity to gather, but it’s also informational. A local law enforcement official participated in one of the meetings, while Merillat said other guests include a lawyer to discuss renter rights, a local commissioner and others to provide subject matter expertise.

Around 15-20 Legion Family members have been taking part in the online meet-ups. “For the people that really feel isolated, this is a really great opportunity not just to talk to someone, but to see their face,” Merillat said. “We’re in each other’s homes. It’s very personal – as personal as it can be without being in person. I think that means a lot to quite a few of those people.”

Another week of the coronavirus pandemic has passed, again providing the opportunity to share what American Legion Family members throughout the nation are doing to assist others.

In Tucson, McCulloch-Wagner American Legion Post 109’s Legion Family served free meals to the community “to share with our community partners that we are in this together and we are here for them,” Post 109 member Ventura Tounsel said.

• In Palmdale, American Legion Post 348 and Auxiliary Unit 348 have partnered with the city and SAVES (South Antelope Valley Emergency Services) to coordinate a vehicle parade on Armed Forces Day for food delivery to veterans in need. “We will be delivering boxes of food to low income, disabled, needy veterans in Palmdale,” Auxiliary Unit 348 President Linda Hayes told the Antelope Valley Press. “SAVES will provide the boxes of food and the addresses for us to deliver the food as we parade through Palmdale. We want to thank first responders and essential workers. We want to help our veterans who need our help. We need to be doing it in a manner that uplifts others who feel down and out, as well as uplifting ourselves in spirit and pride.”

Attendance at the service, which took place at the All Wars Memorial, was limited; participants observed social distancing guidelines.

Since March 23, American Legion Post 28 in Millsboro has been providing 100 free bagged lunches a day Monday through Friday to help feed veterans, seniors and children in the area.

American Legion Posts 144, 43 and 133 joined with the U.S. Coast Guard and Farm Share to stage a food distribution drive in Homestead.

• Morton Grove American Legion Post 134 has been forced to cancel its Memorial Day parade but not ceasing their service to fellow veterans and their families. The post conducted a supply drive for the Fisher House at the Edward Hines Jr. VA Hospital. Legion Post 134 volunteers staffed a drive-up station at the Morton Grove Civic Center last week, where they collected non-perishable foods, paper goods, cleaning supplies and other items.

American Legion Post 369 in East Chicago has teamed up with North and Calumet Townships, the Food Bank of Northwest Indiana and Catholic Charities Food Pantry to coordinate meal deliveries to hundreds of seniors during the course of the coronavirus pandemic. Post 396 volunteers delivered a truckload of Easter hams in April. “We try to help out where we can,” Past Department Commander and Post 369 Legionnaire Marty Dzieglowicz told The Times of Northwest Indiana. “We had put in a big order for Easter hams long before COVID-19 changed our lives. As a group, we decided to donate them to North Township because we knew they would find their way to people who needed them most.”

• In Watertown, members of American Legion Post 61 donated and delivered 50 spaghetti and meatball lunches to healthcare workers at Samaritan Medical Center. "The veterans of the community appreciate the work, professional work that the hospital is doing right now,” Post 61 Vice Commander Rocco Crescenzi told WWNY. “The doctors, the nurses, the staff, are seeing less and less of their family and we just thought we would like to show our appreciation.”

• In Salamanca, American Legion Hughes-Skiba Post 535 donated snacks to Cattaraugus Community Action, which runs a food pantry and has seen an increase in demand from the community. “We always try to help the community as much as we can,” Post 535 Commander Tom Percy told the Salamanca Press. “I volunteered with Meals on Wheels until I stopped because of my age, so I know how important it is for these people to get their food.”

• In Lansford, members of American Legion Post 123 presented Legionnaire George Brimmer with a 75-year membership certificate through a window outside his home at Maple Shade Assisted Living in Nesquehoning. “It’s a very, very special honor on my behalf, especially due to the circumstances,” Post 123 Adjutant Richard Pogwist told the Times News. “We’ve come to visit Bucky frequently, as much as we can … but today was very special, and you could see how appreciative he was. This year, I’m going to have 48 years, and I can’t wait until I get my certificate for 50 years. And here we are doing one for 75 years. It’s really special. At least we did it, and I think we did it proudly.”

• Members of The American Legion 12th District normally have a cookout for veterans at the Wilkes-Barre VA Medical Center, but because of social distancing that event was canceled. So the Legion Family members have instead started performing music outside of the hospital for the patients to enjoy. "We may not be able to be with them now, but we carry them in our hearts every single day,” Legionnaire Nicole Guest told Fox 56. “The American Legion Family loves them, we want them to know they’re not forgotten.”

• In Troy, World War II U.S. Navy veteran and Pearl Harbor survivor J.C. Alston was given a surprise 100-vehicle parade that included American Legion Post 133 members, the local fire department and other members of the community. Post 133 Commander John Potts and Texas Rep. Hugh Shine rode in the front of the parade and stopped to present Alston with several honors. Potts presented Alston a certificate of appreciation from the post and a U.S. flag.

• In Buda, American Legion Post 213 has been a part of a Buda VSO Alliance effort that has produced nearly 3,000 face masks for the community, more than 2,400 surgical mask ear relief straps that have been delivered to 29 medical facilities in Texas, provided food and supplies from its food-bank to six families in the community, and distributed $800 in food vouchers to 20 families in the local community. The alliance also includes Veterans of Foreign Wars Post 12161 and AMVETS Post 115.

• Members of American Legion Post 130 in Falls Church presented Commander Francis Neto with a certificate of honor during a socially distanced event honoring Neto’s retirement from the U.S. Navy after a 28-year career. The post members also joined with others in taking part in a parade that traveled in front of Neto’s home. “Under normal conditions, the military has very appropriate ceremonies on behalf of the retiree," Post 130 Treasurer Harry Shovlin told The Connection. “Since no other ceremonies were going to be held because of COVID-19, (Neto’s mother) asked us to be involved with the plans. We feel any career officer or enlisted person deserves public recognition for their service to our country.”

"He gave his life not only to the country but to his community," Post 479 First Vice Commander Ensley Brown told WISN-12. "And I think that would justify whatever we do."