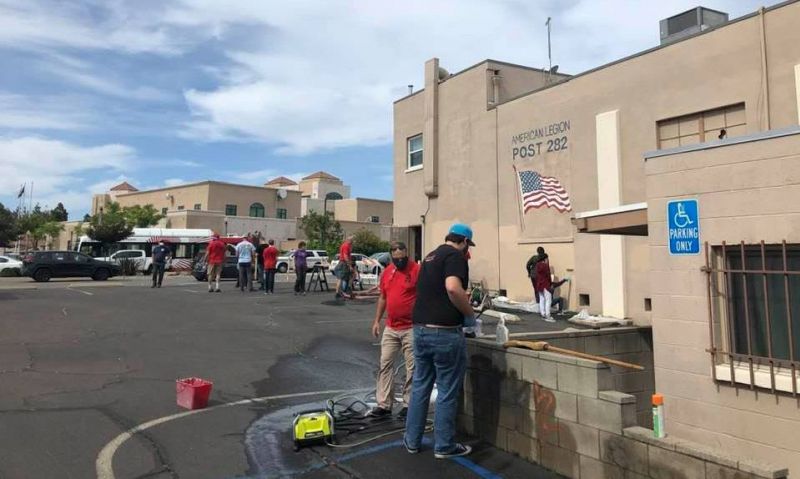 John “Jack” Porath arrived at American Legion Post 282 in La Mesa, Calif., at 7:30 a.m. on Sunday, May 31, to check on the post. Before reaching visibility of the post, Porath stopped his car in front of a dumpster as a gentleman was putting trash into it. Porath asked the gentleman what was going on. He replied, “We’re cleaning up.”

The Post 282 commander looked over to see about four volunteers sweeping glass and repainting over graffiti on the exterior of the post. “I drove in, parked. I was just so upset,” Porath said.

But within minutes of his arrival, the number of volunteers quickly grew to more than two dozen – Post 282 members, members from other area Legion posts, VFW members, community members and Boy Scouts from Troop 51.

“It was just amazing how the community came together, and the volunteers and the veterans from all over … it didn’t matter if they were American Legion or VFW,” said Porath, who also is the commander of VFW O.K. Ingram Ship 1774. “Everybody just pitched in together.”

The vandalism of Post 282 occurred when riots erupted outside the La Mesa Police Station, which is across from the post, following a peaceful demonstration for Black Lives Matter. Porath listened to news of the evening events, which resulted in him waking early to assess the post.

The volunteers power-washed the facility, painted over the graffiti, cleaned up all the glass inside and outside of the post from the broken windows, temporarily boarded up the windows and cleaned up Post 282’s Vietnam War Memorial across the street. “They organized themselves and did what needed to be done,” Porath said. He added that volunteers used their own money to purchase paint and supplies, rags for cleanup and anything that was needed.

“I couldn’t believe the outpouring of support that we got." Porath said. "I get choked up. It was just amazing. Up until this time, I didn’t even know if the community really cared about us over here. After this happened, and the community came over here, I’ve changed my mind.”

Post 282 was cleaned up by 12:30 that afternoon – 125 volunteer hours completed in about five hours. Besides replacing the broken windows, the 73-year-old building will now need repainted.

Vandalism didn’t just touch the walls and windows of the post. Media outlets showed the U.S. flag and POW/MIA flag at the Vietnam War Memorial lowered, set on fire and then hoisted back up. The flag in front of Post 282 was also burned. This stirred emotion in Cory, a local man with no military service but someone who felt that while “everyone has a right to protest, I think it went too far when they disrespected the flag,” he shared with ABC 10 News San Diego.

Cory drove to Post 282 with an extra flag and rope from his home. He shimmied up the 60-foot flag pole standing above the Vietnam memorial to thread a new rope, then raised the American flag. He also left clips for a POW/MIA flag.

The La Mesa Fire Department brought its ladder truck to hang new rope and an American flag on the flag pole in front of the post. And the county veterans service officer showed up to Post 282 with a new POW/MIA flag in hand within 30 minutes of talking to Porath about needs of the post.

“That’s how everybody just came together in this community," Porath said. "I can’t be prouder of a community than this one when I saw what they did.”