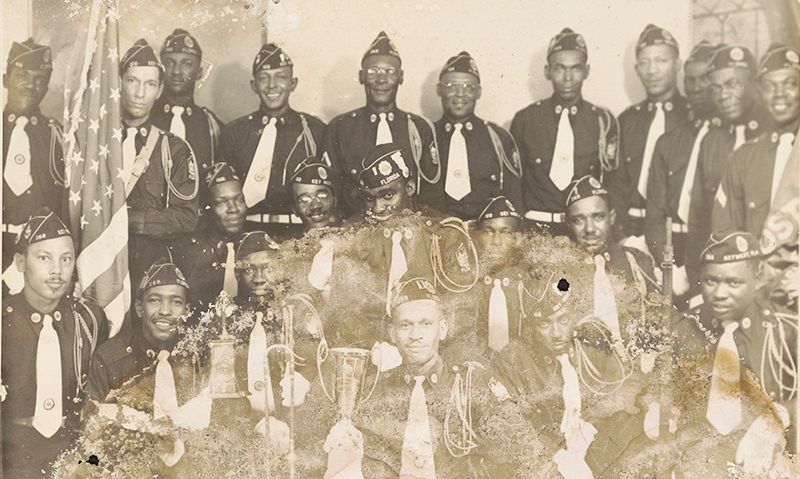 “To the extent that I make a contribution to causes which have continuity, then I gain something which in itself has immortality.”

Earl B. Dickerson, a second lieutenant in the U.S. Army’s 92nd Division who fought in the trenches of France during World War I, was among the earliest American Legion founders to inspire a value that endures today in the organization: a veteran is a veteran, regardless of race, creed, color or class.

Dickerson was one of about 25 African-American delegates who participated in the formative St. Louis Caucus May 8-10, 1919, where the words “justice, freedom and democracy” were inscribed in the Preamble to The American Legion Constitution.

His trust in those three concepts – and the hope they held in particular for the future of black Americans – had moved him to enlist in the Army in 1917. He voluntarily stepped away from his studies at the University of Chicago Law School and marched into harm’s way, to fight for America and principles that ultimately lit his way to a distinguished career in law, business, public service and civil rights advocacy.

Veterans like Dickerson – who established Lt. George Giles Post 87 in Chicago – have stood on The American Legion platform for over a century to push the nation, often with difficulty against rigid opposition, toward greater equality for Americans of all races.

To advance such principles as early as 1919, in a deeply segregated and politically volatile nation little more than a generation removed from slavery, would not be an easy task. The mere acceptance of non-white members and leaders of the organization in 1919 was the first step in a long march that often put The American Legion at odds with government and intolerant segments of society.

The playing field for African-Americans, veteran or not, was decades away from anything resembling even when on Oct. 17, 1923, The American Legion National Convention passed a resolution (still in effect) expressing firm support of equal rights and opportunities “without distinction as to race, color, creed or class.” The resolution, which also condemns any individual, group or organization that “creates or fosters racial, religious or class strife among our people, or which takes into their own hands the enforcement of law, determination of guilt, or infliction of punishment, to be un-American, a menace to our liberties and destructive to our fundamental law.”

That resolution’s place in The American Legion’s conscience proved so timeless that it was reiterated, in full, at the 99th American Legion National Convention in Reno, Nev., in 2017.

By 1923, hundreds of all-black American Legion posts had sprouted up across the largely segregated country. Dozens of them exist today, known as “traditionally black” posts that now welcome all qualified veterans, regardless of ethnicity. Likewise, The American Legion has chartered posts for over a century that are traditionally Chinese, Hispanic, Korean, Native American or of other ancestries to serve diverse communities, provide youth programs, assist with VA benefits, support the military and encourage proud and responsible U.S. citizenship.

The American Legion’s position on equality was perhaps never more clear than in 1944 when the Servicemen’s Readjustment Act – better known as the GI Bill – nearly failed in the 11th hour because some members of Congress disapproved of extending post-war unemployment benefits for black veterans. The big issue: $20 per week for 52 weeks after discharge to provide World War II veterans a chance to find employment, start businesses, apply for college or enroll in vocational training programs in the civilian world. Naysayers in Congress, particularly those who opposed the GI Bill on racial grounds, believed veterans would just milk the unemployment benefit for a year and then start looking for work. (They did not; less than 20 percent of the money budgeted to pay veterans the $20 per week was actually used.)

The American Legion fought to keep the 52-20 provision intact, for all veterans, and launched a frantic, last-minute search to bring Rep. John Gibson of Georgia to Washington, D.C., in the middle of the night to cast the swing vote that brought the GI Bill out of a deadlocked congressional conference committee. If not for that mission, and Gibson’s threat to reveal to the press the racially motivated reasons the GI Bill was stalled in that committee, it would have died there, denying opportunities for millions of veterans and their families.

The American Legion was firm throughout the battle to get the GI Bill passed. Black veterans would not be denied its full portfolio of provisions.

Institutional discrimination at the time, however, persisted due to the structure of VA home loans, allowing lenders and property developers to impose conditions that denied access to benefits on the basis of race; all-white college campuses were also allowed to discriminate, veteran or not. The Civil Rights Acts of 1964 and 1968 – as a higher-than-ever percentage of black military personnel fought in Vietnam – finally began to change that.

President Harry Truman, an American Legion member, perhaps had been guided by the founding spirit of the organization when he desegregated the U.S. Armed Forces in 1948. He did so by Executive Order 9981, amid threats – not unlike those that were aimed at the GI Bill – of congressional obstructionism if the plan had taken a legislative route.

As the Korean War, Vietnam War, Cold War, Gulf War and Global War on Terrorism kept the United States in a perpetual state of armed conflict for most of the last 70 years, the percentage of non-white men and women in service has increased and risen in rank. But the number of men and women who serve in the Armed Forces has fallen per capita to less than 1 percent of the entire population.

Dickerson – who was onstage with Dr. Martin Luther King Jr. when he delivered his “I Have a Dream” speech on Aug. 28, 1963, at the Lincoln Memorial in Washington, D.C. – likely would have hoped that his confidence in justice, freedom and democracy would have America in a better place today than it is.

But for over a century, The American Legion has shared, and at times led, in the long and complicated struggle to achieve equality – whether for veterans, troops, youth program participants or citizens in their communities. Regardless of race or place on the map, Legionnaires salute the same flag and recite the same preamble before every meeting, a century-old vow to “maintain law and order,” “promote peace and goodwill on earth” and to “safeguard and transmit to posterity the principles of justice, freedom and democracy.”

“A veteran is a veteran,” American Legion Past National Commander E. Roy Stone wrote in 1994. “We live with memories of war that humble us and fill us with a sense of spiritual connection to the freedom that Americans enjoy. We have a stake, if you will, in seeing our country live on and grow strong because we witnessed so many give their blood and sometimes their lives toward this end.” Dickerson fully understood this, having named Post 87 to remember a close friend who was killed by a shrapnel wound in France.

Today, the United States stands at another complex moment in the long and often-agonizing journey to achieve the kind of justice, freedom and democracy envisioned by Earl B. Dickerson, John Gibson, Harry Truman, E. Roy Stone and millions of American Legion Family members throughout the last century.

Across the nation and even beyond, thousands of American Legion members of diverse ancestries are working together – even if separated by a continent – guided by the same sense of mission they learned through military service, to help communities through the coronavirus pandemic. In Queens, N.Y., Rosedale-Laurelton American Legion Post 483 has been providing and delivering meals for more than 1,000 people a week in its predominantly African-American community. “That’s part of our military mandate of selfless service – to feed the community, especially during the pandemic,” Post 483 First Vice Commander Sharon Sweeting-Lindsey said.

Post 10 Commander J.R. Duarte of predominantly Hispanic/Latino South El Monte, Calif., which delivered gift cards to local residents laid off during the pandemic, puts it this way: “I really believe in making America better. It’s one of the reasons why we joined the service to begin with. It’s our duty. That’s basically what it comes down to.”

As American Legion members have worked to improve their communities, states and the nation, the protest movement spurred by the death of African-American citizen George Floyd on Memorial Day 2020, has pushed Earl B. Dickerson’s and The American Legion’s founding vision for justice, freedom and democracy, as well as law and order, peace and goodwill on earth, to the top of the national agenda.

“Where the law has been broken, justice must be served,” American Legion National Commander James W. “Bill” Oxford said in the aftermath of nationwide protests over the “seemingly unconscionable” death of Floyd and other African-Americans. “Where freedom has been denied, it must be returned, without prejudice. Our nation has much to consider as we continue to strive toward a shared goal found in the Pledge of Allegiance to our flag: ‘with liberty and justice for all.’ All means all. Anything less than complete equality in the execution of these values today is as un-American now as it was in 1923.”