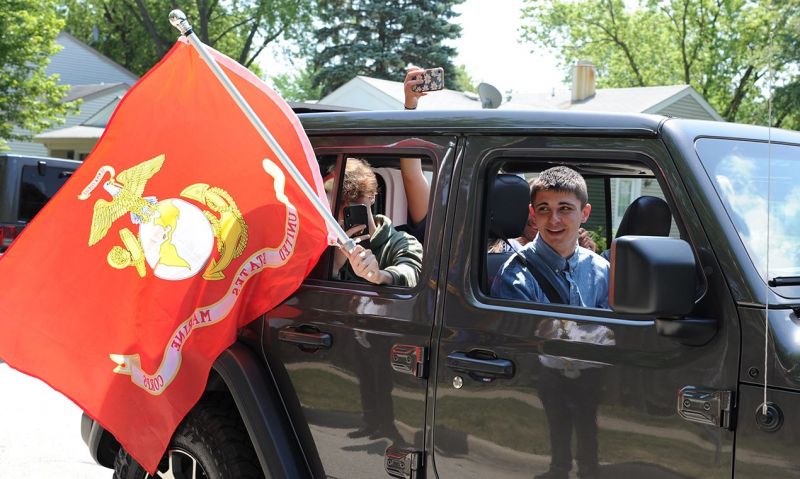 An Illinois 18-year-old who chose to enlist in the U.S. Marines got the proper – and socially distanced – send-off to basic training on July 5, thanks to the efforts of American Legion Post 1247 in Buffalo Grove.

Steven Hart of Vernon Hills received an escort from four Vernon Hills police cars and a Countryside Fire Protection District engine as he and his family drove toward Marine Recruiting Substation Lake County in Waukegan. Post 1247’s color guard led the procession to the end of Hart’s block.

Around 20 or so relatives and neighbors, most wearing masks, were outside of Hart’s home to see him off. The entire event was organized by Post 1247 Adjutant Craig Warner, who said the post did something similar two years for then-Post Commander Todd Renihan’s daughter, who had enlisted in the Army directly out of high school. Warner communicated with local officials to make that event happen and did the same this time

“My wife texted (on July) that she had gotten a text that Steven Hart … was going into the Marine Corps on July 5. He was supposed to go later in the month,” Warner said. “I called the police department. We called the fire department. Everybody said, ‘We’re on board.’ It was very easy to organize.”

Hart, who graduated from Vernon Hills High School, has wanted to join the Marines since age 12. "Everything I've done has led up to this point," Hart told the Daily Herald. "I'm excited and I'm nervous."

Warner said he told Hart’s mother about the escort, but it was kept a secret from the young man. “This is crazy," Hart said of the showing of first responders and the color guard.

Hart also was presented with an American Legion challenge coin before departing town. “I came up and introduced myself to him … and I said, ‘What you’re about to do is going to define your life. It’s going to define you as a man and a citizen. We just want to let you know that you’re not alone. We’re here for you,’” Warner said. “Many of us have gone through this before. It really meant a lot to me to be able to do this for this kid. We really enjoyed it.”

Post 83 Growing Through Youth Support. In April, hundreds of 4H and Future Farmers of America (FFA) participants in Merced County, Calif., learned that their county fair had been canceled because of statewide stay-at-home order and the uncertainty of the future impact of the coronavirus.

But American Legion Post 83 in Merced teamed up with members of the community to stage a June virtual livestock show for the exhibitors. The Merced County Shelter-In Showdown provided exhibitors with a venue to show their animals on a virtual platform and earn awards.

But the post’s assistance with local 4H and FFA youth didn’t stop there. With the California State Fair also canceled, Post 83 helped 38 of the Shelter-In Showdown participants also take part in The Audible, a large swine show that took place in Reno, Nev., in early July to serve as a replacement for the state fair.

For the Shelter-in Showdown, exhibitors prepared their animals as if they are going to appear in the show ring and then created a video of themselves showing their animal as if doing so during the fair. Videos were uploaded to an online website and divided into classes, where they will be evaluated and awarded places by actual livestock judges.

“It was great. You were able to watch them show their animals around their own property,” Past Post 83 Commander and current District 12 Commander Gene Hamill said. “I think the kids enjoyed it because they were kind of on their own turf. And when it was all done, they came to (the post) to get their prizes and awards and stuff. And when they took those animals into auction, we had raised enough money … that we donated $5,500 toward their sales. And we were able to create a $500 ag scholarship for the kids through this program as well.”

With The Audible Show, Post 83 handled logistics such as registration, collecting fees and securing lodging for participants from Merced County. But the post’s involvement with both events has had a more far-reaching effect.

“The agricultural community has really taken notice of The American Legion because of this,” Hamill said. “In fact, statewide and into Nevada, The American Legion has become known because we were considered a sponsor … through all this. I’ve had people from other states that have said, ‘Hey, you’ve got this program going. How can we do this?’ And locally, we’ve seen an increase in our membership. Some of these ag people that are veterans or have moms or dads that were in (the military), they’ve either signed up or gotten their kids involved now. It’s been a huge win for us and for them.”

The following are some more ways American Legion Family members continue to serve during the coronavirus.

Stay-at-home orders due to the coronavirus prevented Christopher American Legion Post 528 from providing military honors at the funerals of five veterans who passed away recently. So the post honored all five during a July 3 ceremony at the Christopher Veterans Memorial that included a 21-gun salute and the reading of each veteran’s name.

"I'm trying to help my veteran families have closure. When I ask to do this every one of my men said I'll do it," American Legion Post 528 commander Roger Rice told WPSD Local 6. "Doing this here and anything else people do to bring people out, I think it helps the morale of the area."

Post 528 Chaplain Alan Minton, who knew three of the veterans, said the ceremony was a way of “honoring their loved ones for the service they gave for our country. I wish there were more people here that realized what this is all about, what our veterans stand for. They stand for the liberty and freedom we still have today.”

Post 528 also will provide graveside military honors for the families of those veterans if requested.

Frank M. Jarman Post 36 in Chestertown is now serving as the base for the Social Action Committee for Racial Justice’s Feed the Elderly program. The volunteer initiative provides porch delivery of food to area seniors who are low-income, housebound or need help meeting their nutritional needs.

American Legion Auxiliary Unit 21 Junior members Lilly, Harley and Delaney Riha have been hard at work in McMinnville Post 21, producing more than 1,200 ear protectors for protective masks being worn by nurses, veterans and other community members.

The three sisters – ages 11, 9 and 3 – used making the ear protectors for part of their Junior Auxiliary service. More than 300 of the ear protectors have been provided to nurses at Willamette Valley Medical Center in McMinnville.

Harley told The Bulletin they started the project after their grandmother, Auxiliary Unit 21 member Jeanne Clayton, showed them photos of nurses whose ears have been rubbed raw by mask straps. “We got the idea to help prevent that,” Harley said.

Members of American Legion Post 21’s Legion Riders chapter are delivering the protectors to medical professionals and residents in veterans homes in Lebanon and The Dalles. Those for veterans have heart-shaped buttons that say “Made with Love.”

What was a normal Memorial Day ceremony had to be pushed back to July, but Henry Houston American Legion Post 3 and its Legion Riders still hosted a flag placement event at Holy Sepulchre Cemetery in Cheltenham on July 4.

Legionnaires and volunteers from various organizations covered over 80 acres of the cemetery looking for gravesites of veterans where they could place flags. The effort included Post 3 Legion Family members, other organizations and businesses, and members of the communities.

American Legion Riders Chapter 3 President Bob Clegg told Montgomery Media the effort “is a long standing tradition of the Henry Houston Post and we were all glad to get out there and get it done.”