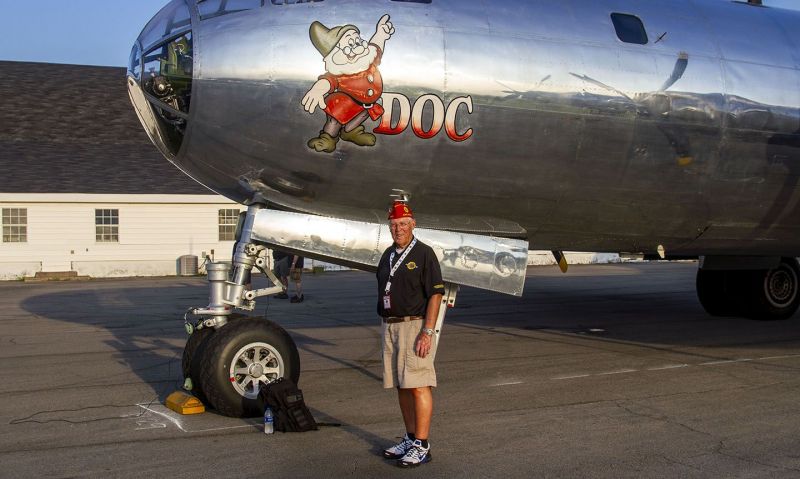 I recently had a unique experience thanks to my membership with The American Legion Media Alliance (TALMA) and the Fayetteville, Ark., Air Museum.

On Labor Day weekend, the museum was hosting a display of World War II aircraft at Drake Field in Fayetteville in honor of the 75th anniversary of the end of World War II.

Being a fan of history and having a love of photography, I called the Air Museum to see if I could get media credentials. When I identified myself as a member of TALMA, the museum representative came back with an offer I couldn’t refuse. I was offered a spot on the B-17 for a short flight into Missouri and back to Fayetteville.

Obviously, I was elated and graciously accepted.

However, just like in the military, the best-laid plans often have to be modified. The B-17 lost its No. 3 engine in route from Houston to Fayetteville and landed instead in Texarkana for repairs.

Needless to say, I was disappointed. But Laci Shuffield, director of the Air Museum, came to my rescue and coordinated a spot for me on the B29 Superfortress, which was flying at 9 a.m. on Saturday, Sept. 6. The B-29 was joined by a T-6 Texan and a twin-engine Beech Navy Transport.

There were coronavirus-related procedures to follow. So after being tested for temperature and given a mask I was ready to board. Now I must say boarding the B-29 is a lot different than modern day aircraft. You actually use ladders to climb up and get into the plane. The crews who flew these planes had to be on the slim side and very agile.

Unlike its predecessor the B-29 Superfortress was designed as a high-altitude bomber. And unlike the B-17 it was pressurized so it could fly in excess of 30,000 feet. This may have been one of its best defense’s as the Japanese fighters couldn’t fly that high in most cases and if they did, they couldn’t catch the Superfortress.

The B-29 joined the war effort in May 1944. Like the B-17 did in the European campaign, the B-29 served as the workhorse in the Pacific. In fact, it was the plane the delivered the atomic bombs on Japan that put an end to World War II.

After a briefing from pilot Tim Wiebe, we boarded and then taxied to runway one six. As the pilots went through their checklist, we listened to the roar of the huge piston engines. When they revved up the engines, this 70-plus-year-old aircraft began to shimmer and shake. Once they released the brakes, we zoomed down the runway, reaching 130 mph before lifting off.

This was truly an awesome experience for me. After reaching cruising altitude we were allowed to unbuckle and move about the airplane to get better views. The best view I had was in the tail gunners’ seat. The difficult part was getting there. The opening is so small you have to literally crawl on your hands and knees to get there. But once there, you were treated to an unobstructed view of the world below and behind you.

The tail gunners couldn’t make it to their seats with a parachute because it was so constricted that they wouldn’t fit. They would have had to leave their parachute near the rear exit door. If something happened and the crew had to bail out, the tail gunner was in real trouble. Not only would he have to crawl through a small tube, then he would have to put on his parachute. Chances are that many of them didn’t have enough time.

This whole experience gave me a real appreciation for the crews of the Army Air Corps.