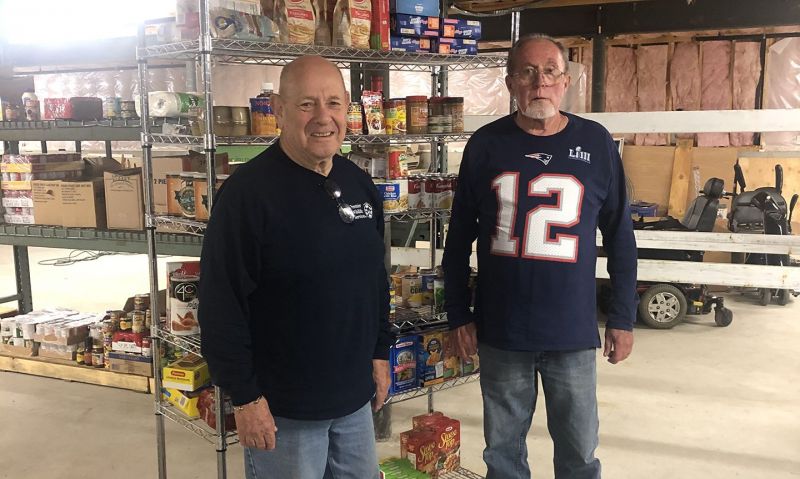 The first such effort debuted Sept. 29 when Post 40 opened up the doors to its own food pantry, which will provide assistance to both veterans and members of the community in need of help. The pantry will be open from 11 a.m.-2 p.m. every Tuesday.

“It’s very important,” Kelley said of the effort. “A lot of the places that have food banks are not servicing like they normally do because of the pandemic. When this idea came, I jumped right on with Beth. It was a go within two months. We’ll wear our masks and do whatever we need to do. The need is out there, and we’re going to try to fill it.”

In addition to a large number of donations from the community, the post also has received food donations from Plymouth’s Center for Active Living, the South Shore Community Action Council and St. Peter and St. Kateri Tekakwitha churches.

“People are calling that don’t even belong to the post to donate,” said Lynch, Post 40’s Executive Director of Operations. “The support from veterans to non-veterans, to members to non-members, it is a whole community. And here at Post 40, it is a family: the (Sons of The American Legion), the (Junior Auxiliary), the Auxiliary, the Legion, all of us together. It’s a village.”

The goal is to provide both fresh and non-perishable food items, toiletries and frozen foods, thanks to the post purchasing a freezer to store the latter.

“If you saw this place downstairs, you would not believe it,” Kelley said. “It’s a food bank in itself from donations.

Other American Legion Family members throughout the nation continue to provide assistance to others while carrying out the mission of The American Legion.

In South Lake Tahoe, The American Legion Family at Stella Van Dyke Post 795 is conducting its annual toy drive this weekend. The post will provide the opportunity for donors to drop off via drive-thru new unwrapped toys or non-perishable food items that will be distributed to families in need during the holiday season.

“This year has been especially tough on local families and we need your help to ensure we have enough toys and food to provide a joyful Christmas to local children,” Christmas Cheer volunteer coordinator and Auxiliary Unit 795 member Joanne Shope told SouthTahoeNow.com. “Without the communities’ support, needy children at Lake Tahoe may have no gifts or food on Christmas morning.”

“I’ll never forget this,” Wiggins told the Cecil Whig. “I was never celebrated like this before.”

In Marietta, American Legion Post 64 took part in the Complete the Mission Food Drive to benefit the Gospel Mission. The food drive, which took place in the Marietta Times parking lot, also provided the opportunity for veterans to get flu shots via the Department of Veterans Affairs and receive counseling through the Vet Center Mobile Clinic.