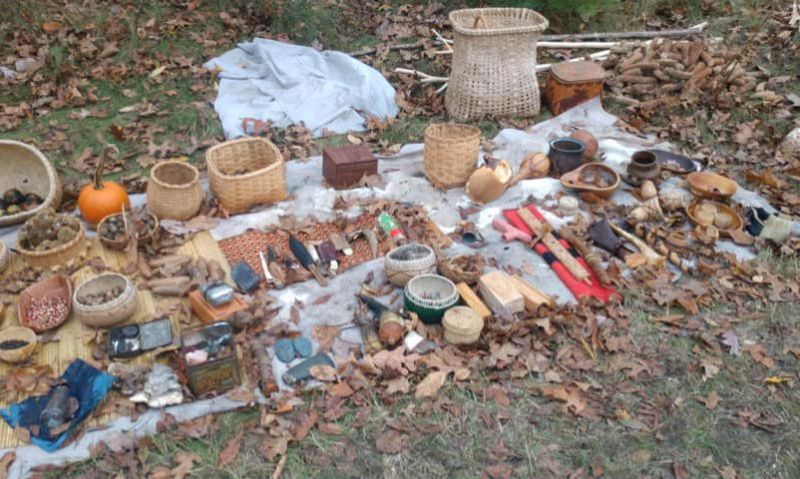 In 2019, The American Legion Department of Michigan hosted its first-ever camporee at Wilwin Lodge at Cygnet Cove, a 1,183-acre property owned by the department and used for veteran relaxation and rehabilitation, as well as to give youth “an enjoyable outdoor experience.”

Nearly 200 Scouts and Scout leaders took part in the camporee, a regional Scouting gathering, setting the stage for what was going to be an annual event. Then things changed.

With the coronavirus pandemic shutting down Michigan, a 2020 camporee seemed unlikely. But the department still wanted to have a plan to host another camporee if restrictions started being lifted.

Thanks to that planning, more than 200 Scouting participants were able to take part in three concurrent, socially distanced camporees Oct. 16-18 at Wilwin Lodge. Department Scouting Committee Chairman Clyde A. Sinclair said the decision to host the camporee didn’t come without much consideration for how to do it safely.

“This year we struggled with the decision to proceed with a second camporee due to Covid-19, but knowing that the Scouts had been shut in all summer, we felt they would benefit from being outside,” Sinclair said. “Planning began early in 2020 for the camporee even though the state was under lockdown. If the opportunity came, we wanted to be ready, so we began planning two independent and separate camporees, each with less than 100 Scouts, leaders and Legion staff.”

In early October, the state began to allow outdoor gatherings with up to 100 people. Sinclair said that provided the department with the opportunity to host the camporee.

And there was a demand to do so. “With only days remaining before the camporee, registrations increased, making it necessary that we plan to conduct three concurrent and separate camporees,” Sinclair said. “Early on it was obvious that additional staff would be required to have successful events, so a plea for volunteers was made to the troops who registered. The response was nothing short of overwhelming.”

Scouts and leaders had their own tents, unless they were family members. The participants were socially distanced, and a health officer certified as an emergency responder was on hand for the duration. Regular temperature checks were made.

Sinclair said that all three camporees held identical activities with Star Wars-type names, such as “Staying Warm on the Ice Planet Hoth” for a fire-building station, and “Knocking on the Front Door of the Death Star”, which had the Scouts build a tripod battering ram. A geocaching course was named “Searching for Han Solo.”

Having a facility like Wilwin Lodge also helped. “It gave us the ability to spread the camporees out so that there would be no interaction between them,” Sinclair said. “Since the camporee, I have received many encouraging words of appreciation for our efforts. Scoutmasters and department personnel alike observed the Scouts playing and joking with renewed energy and enthusiasm.”

Sinclair said the camporee wouldn’t have happened without the support of department leadership past and present. “I have been so very fortunate to have served with three commanders in a row who are all Eagle Scouts,” he said. “In addition, (Department Adjutant) Ron Runyan is an Eagle Scout and has played a big part in our plans as well. In all honesty, I can’t imagine bringing this camporee to reality without the help and encouragement of three Eagle commanders.”

More American Legion Family efforts to assist or honor others during the pandemic.

• American Legion Post 509 in Fresno hosted a drive-thru ceremony to honor dozens of 2019 volunteers at the VA Central California Health Care System. The volunteers are normally honored during the spring at the VA Voluntary Service Award Recognition event but was postponed several times because of the pandemic. Each volunteer was given a certificate, along with a gift bag with assorted treats, a boxed lunch and peanut brittle.

Mount Prospect American Legion Post 525 recently presented a check for $7,802.56 from the post’s annual Fall Classic golf tournament to Laura Franz, executive director of TLS Veterans. TLS is a nonprofit whose main focus gears toward veterans who are homeless or at risk of becoming homeless, providing housing, food, clothing, counseling, job placement and a variety of other services.

Franz told the Journal & Topics this year’s donation was especially appreciated this year, when those the nonprofit assist are experiencing added pressures due to COVID-19.

“This is one of our greatest honors, to honor any type of veteran, but to be able to do a World War II veteran, I mean, it’s just...it gets you right there," American Legion Riders Chapter 357 Director Wayne Zwierzynski told WNDU-TV, pointing to his heart.

Harry L. Anderson American Legion Post 34 in Oskaloosa and Van Veen-Van Hemert Post 89 in Pella are teaming up to conduct a food drive for area veterans in need. The two posts and Pella Go Ruck are collecting food from now until Nov. 7 at five different locations in Oskaloosa. On Nov. 7, members of both posts will load their backpacks up and pick up the food at the different sites, where it will be then delivered to the Ecumenical Cupboard, which provides food and hygiene necessities to those in need. The American Legion Family members also are collecting cash donations to be used to provide area veterans with meals from local restaurants.

In Topeka, Sons of The American Legion Squadron 400 teamed up with the Community Blood Center for a blood drive that Squadron 400 Commander Jeff Kerns said typified his organization’s efforts.

“The (SAL’s) mission is to help veterans in any way or form that we can and they need blood; it may just be for a transfusion, it may be an accident, it’s just a way for us to help give back,” Kerns told WIBW-TV. “Blood is just an essential part of everything we do, as far as helping out and giving back as far as it being our mission. It’s one of the items on our list each year to help the community, and it just happens to be one we like to focus on.”

In the midst of a pandemic, the blood-donation effort comes at a critical time. “Either people in need of blood or with the COVID right now they’re using the blood to do testing and stuff so they can hopefully find a cure for this," Kerns said. “We’re all here hoping that what we give today, if maybe this blood gets used to find a cure or help some of these things, I know it’s going to help anybody and everybody.”

In Plymouth, American Legion Post 40’s color guard took part in an appreciation day staged by veterans for the efforts of first responders and medical workers during the pandemic. The event took place at BID-Plymouth hospital, where plaques were presented to police, firefighters and medical workers.

“It was a really good reaction,” Fritsche told the Pioneer Press. “We were really honored to be able to do this for him.”

• In Olean, members of Charles Harbel Post 892’s American Legion Family helped make the 100th birthday of World War II D-Day veteran George Schrieber Jr. special. In a socially distanced celebration at The Pines of Olean nursing home, Schrieber was presented with a certificate from Olean Mayor William Aiello while from a distance members of Post 892 provided an Order of Arms and formal salute. Prior to the celebration, Auxiliary Unit 892 Veterans & Rehabilitation Chairman Jo Lippert had set up a box at the post that asked members and their families to provide 100 birthday cards for Schreiber so he would have them to represent his years of life. “It worked great; I gave them to his staff (at the nursing home) and he loved them,” Lippert told the Olean Times Herald. “We’re happy how this turned out.”

In Willoughby, American Legion Post 214 is hosting a food drive for local families in need and will combine it with a trunk or treat event for children. The post will be collecting food staples such as canned goods, peanut butter, boxed items and cereal.

Like many American Legion posts, Kingsland Post 437 had to shut down temporarily during the pandemic. But that didn’t stop the post’s American Legion Family from assisting others.

In the past few months the post’s Legion Family has raised funds for the Share the Harvest Food Pantry in Kingsland, distributed toiletries at an area senior center and conducted a successful motorcycle poker run.

“The auxiliary plans to continue our support of the food pantry,” Auxiliary Unit 437 President Denise Wheeler told DailyTrib.com. “And, we are looking for veterans’ families who might need holiday help.”