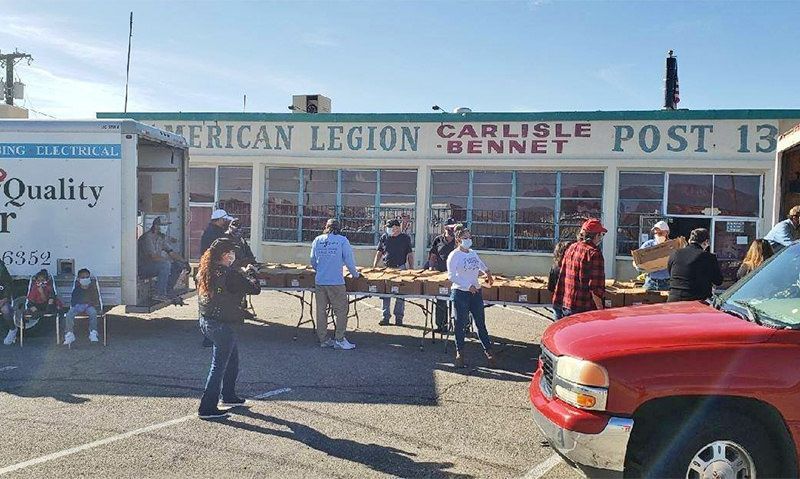 For around 15 years, Capt. Lester S. Wass American Legion Post 3 in Gloucester, Mass., has provided free delivery and carryout meals for its surrounding community at Thanksgiving, Christmas and Easter.

The outbreak of the coronavirus forced the cancellation of this year’s Easter meal. But Post 3 was able to create a safe way to both prepare and distribute Thanksgiving dinners. And as it turned out, the need was greater than ever before.

The post normally provides a little more than 400 meals annually at Thanksgiving. But this year, nearly 700 were handed out – most via delivery – assisting veterans, the homeless, senior citizens, shut-ins and others in need.

The need for the dinners this year “was off the charts,” Post 3 Commander Mark Nestor said. “A lot of the elderly, they couldn’t go anyplace. They’re afraid to go out to restaurants. They’re afraid to go with their families. Every state around Massachusetts (has surging COVID numbers). The economy is tough. I probably could have fed another 25 or 50, but I had to shut down because we essentially exceeded what we ordered for food.”

In order to safely prepare and package the meals with proper social distancing, Post 3 moved its preparation and cooking option to The Open Door, which works to assist those with food insecurity through a food pantry, community meals and a free mobile farmer’s market.

The Open Door prepared more than 1,200 food baskets this year in advance of the holiday weekend to allow members of the community to cook their own meals at home. That freed up its kitchen space for Post 3.

“We were trying to bend over backwards to make this thing work during the COVID environment,” Nestor said. “This enabled us to safely prepare, pack and deliver this food. We probably wouldn’t have been able to have done it in our kitchen.”

The decision to allow Post 3 to use its kitchen space was an easy one for The Open Door. “Hosting the American Legion for their annual Thanksgiving meal program made a lot of sense," The Open Door President and CEO Julie LaFontaine told the Gloucester Daily Times. “The Open Door's mission is to connect people to good food. What better way to show the power and spirit of community than to work together?"

Cooking the turkeys began the day before; the rest of the meal included mashed potatoes, stuffing, peas, cranberries, rolls and pie. While volunteers prepared and packaged the meals, members of the Gloucester Sea Cadets carried the food out to place in the trunks of the delivery vehicles manned by more than 60 volunteers.

Meals were delivered to residents in Gloucester, Manchester, Rockport, Essex and Ipswich. Nestor said Post 3 is the only organization that provides meal delivery at Thanksgiving.

At the end of the day, around 130 volunteers had assisted with the effort.

“Most people have a basic sense of responsibility, and Gloucester is no exception,” Nestor said. “I’ve been running this thing for about five years (at Thanksgiving, Christmas and Easter), and every year the number of volunteers is overwhelming. Now I have a lot of young families who bring their kids so they can experience what the holiday really means. They can help deliver meals.

“For the kids to see the elderly clients, and for the elderly clients – who probably won’t see anybody else for Christmas or Thanksgiving – to see these little kids delivering the meals … it’s an eye-opening for both of them. We’ve had a lot of kids who, after the first year, want to come back. They’ve been imbued with this sense of responsibility and what the holiday really means. That what we were trying to do … that this is what you do for the holiday. You take some time … to spend it with somebody else – in this case 690.”

While the pandemic changed the look of Thanksgiving for many this year, it didn’t sidetrack the American Legion Family’s mission of assisting others, especially during this time of year. The following are a few examples of that assistance.

• American Legion Post 348 and Auxiliary Unit 348 in Palmdale continued an annual tradition of donating enough turkeys and hams to feed all of the veterans, residents and staff at the Veterans Home of California-Lancaster.

• American Legion Post 397 in Monterey Park provided at no cost either a free sit-down meal on the patio or takeout Thanksgiving meal to anyone in need.

• In Conway, Ralph W. Shirley Post 46’s American Legion Family served close to 300 meals either curbside or via home delivery on Thanksgiving, including many for the Gibson Center’s Meals on Wheels program.

What typically has included a large community Thanksgiving meal had to be altered this year, but American Legion Post 255 in Brainerd was again able to feed hundreds of members of the community. Although the sit-down dinner was canceled, the post set records for delivery and pick-up meals.

Vehicles lined up around the block to pick up dinners from a tent in front of Post 255. By the end of the day 1,000 meals had been delivered and another 400 picked up at the post. Local first responders assisted with deliveries and pick-ups, while Post 255 received food donations and financial contributions from Post 255 members and other veteran and civic organizations.

Any food that remained was donated to the Minnesota Teen Challenge, a long-term, faith-based recovery program and short-term licensed treatment program for those with addiction problems.

In Springfield, American Legion Post 639 knew hosting a large meal wasn’t in the cards, but that didn’t stop the post from assisting others. Rather than a community event, the post reached out to local charities to find out which ones were in need of food.

The donations made a difference for both the staff and those receiving assistance at Isabel’s House, which provides 24/7 care to the children of families in crisis. Isabel’s House Program Director Natosha Lancaster told Ozarks First “when the opportunity came up for this type of donation, to prepare the food in advance, we jumped at it because the staff that is working really don’t have to cook most of the food. We’ll serve lunch and dinner to the families that come to be with their kids as well, so I’d say about 30 people are going to be served with this donation, 30 to 35.”

“We are always open to anything that helps out the community and veterans and families in any way they can, and in a safe way,” New Mexico National Executive Committeeman and Post 13 Commander Paul Espinoza told KRQE. “Honestly, I just hope this little thing that I’m doing makes a big impact on this city. Pretty much to raise awareness of all the people that are struggling that we really don’t see that are struggling.”

In La Pine, American Legion Post 45 continued a 35-year Thanksgiving tradition of assisting others, providing more than 300 area residents with free meals. Rather than providing a meal in a traditional setting, the post distributed the meals via a drive-thru service.

In Plymouth, American Legion Post 463 provided more than 100 Thanksgiving desserts to residents and patients at the Wilkes-Barre VA Medical Center. The post normally invites the VAMC’s veterans to the post on Thanksgiving Day but couldn’t do so this year.

In Williamstown, American Legion Post 159 prepared and packaged around 150 free meals for individuals and families, the 16th year the post has provided a variation of a Thanksgiving dinner. Many of the meals were delivered, while the rest were picked up; post and community donations provided the food and funding for the dinners, which included ham, turkey, sweet potatoes, green beans, dressing and desserts.