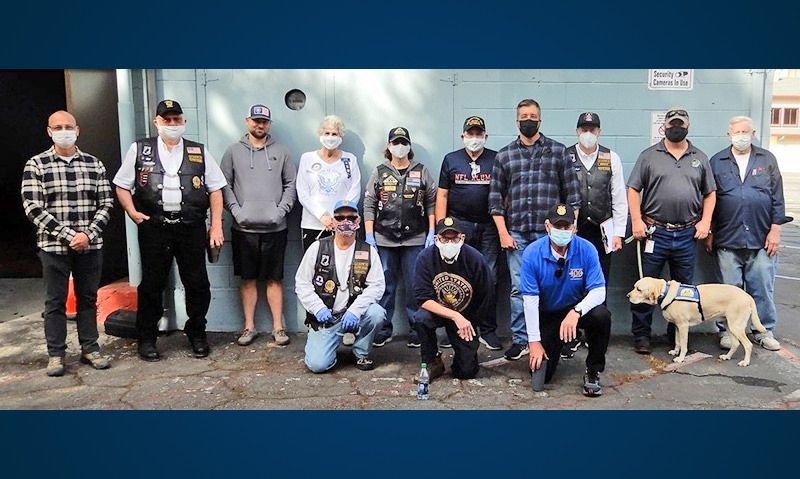 American Legion Post 105 in Redwood City, Calif., recently hosted a free COVID-19 testing for area veterans, their families and other members of the community. A total of 97 people received tests, including 68 veterans and family members.

During the fall as Missouri saw its coronavirus cases spike, Roscoe Enloe Post 5 in Jefferson City saw less and less members come to its facility. In order to make its members feel safe during an uncertain time, Post 5’s Legionnaires started looking into how to make that happen.

That’s when the post found out the Missouri Department of Health and Senior Services was offering free COVID-19 testing conducted by the Missouri National Guard to those wanting to host such an event. Post 5 applied and was granted a testing site from 10 a.m.-6 p.m. Dec. 10.

“We wanted to provide something for the veterans and their families,” Post 5 First Vice Commander Dan Levasseur said. “A lot of them are aging, and a lot of them have a single income coming in. For them to go to the hospital (for testing) will cost them a little bit of money under Medicare. Or they can go to (a Department of Veterans Affairs facility), but that requires traveling. We just wanted to do something locally, and we’ve opened it up to everybody. But it was mainly for the Legion Family, veterans and their families.”

Testing will take place outside of the post, with people staying in their cars while in line. Levasseur said the post’s parking lot – which requires visitors to enter one way and exit another – provides the perfect setting for the testing.

The tests will be done with a nasal swab and will determine if there is an active infection with SARS-CoV-2, the virus that causes COVID-19. It is not an antigen or antibody test.

American Legion Post 105 in Redwood City, Calif., hosted a free COVID-19 testing on Nov. 21 for area veterans, their families and other members of the community. The testing was co-sponsored by the San Mateo County Veterans Service Office and Post 105, while members of Post 105’s entire American Legion Family served as volunteers during the course of the day.

A total of 97 people received tests, including 68 veterans and family members.

As the number of coronavirus cases across the nation rise, American Legion Family members have remained undeterred in their efforts to assist others through a variety of ways. The following are some of those recent efforts.

Members of Downey American Legion Post 270 have kept up with their Buddy Checks, including American Legion Past National Historian James "Jim" T. Higuera, whose efforts recently were highlighted by Spectrum News 1.

Higuera told Spectrum News 1 the calls show veterans they still have support from The American Legion. "'How's everything going? How's your health? Have you been to the doctor lately? Are you taking your medication? Are you eating your breakfast?’" Higuera said. "Our main purpose is seeing how you are doing as far as this pandemic is concerned … we just want to do that personal touch. Being around people that you're safe with, that you know they're watching your back. They're taking care of you.”

Higuera said Buddy Checks can also identify problems ahead of time. “We want to be there before something happens," he said.

In Aurora, members of American Legion Post 84 teamed up with Sunnymere assisted living to organize a drive-by parade to honor the 100th birthday of World War II veteran and Purple Heart recipient Johnny Kee. Two parades of cars sporting U.S. flags drove by the facility to show their respect for Kee.

"I wasn't expecting all of this, didn't expect to see all of these people," Kee said. "It's good to see everybody."

Members of American Legion Post 1944 in Aurora also participated in the parade. "It's a once-in-a-lifetime event, an honor to come and honor him," Post 1944 Legionnaire Gary Krolik told Kendall County Now. "It's because of guys like him that we're even able to gather today. We tip our hat to him."

Since Nov. 16, Valhalla American Legion Post 1038 has hosted the VA Montrose Veterans Food Pantry Extension to provide grocery items to veterans in need. The food is distributed from 9 a.m.-noon Mondays via a contactless drive-thru at the post.

• Members of American Legion Post 336 in Painesville were part of a birthday parade for 90-year-old William Barnhouse, a Korean War veteran. A party originally had been scheduled at Post 336 but had to be cancelled because of the pandemic. Members of the VFW and Moose Lodge also joined in the parade in front of Barnhouse’s home, as did first responders. "(Barnhouse) served his country, fought in the Korean War and he's been a very dedicated person," Post 336 Legionnaire David Seibert told the News Herald. "I think it shows we appreciate what he did for his country."

• Members of American Legion Post 565 in Youngstown have been volunteering at food distributions provided through the CARES Act and Gleaners Food Bank. One prior to Thanksgiving provided more than 200,000 pounds of food. "This is just one way of giving back to the community,” Post 565 Commander Phillip Markovitz told WFMJ. “COVID has effected so many people. We are seeing a lot of veterans at the food give away also because there are not a lot of opportunities here for them. This is one way to help them and people throughout our community.”

Members of American Legion Fairmount Post 85 teamed up with the USA Veterans and Military Support Foundation to distribute 400 boxes of meal kits to veterans in need in Woonsocket. Each kit included 15 days' worth of meals for veterans.