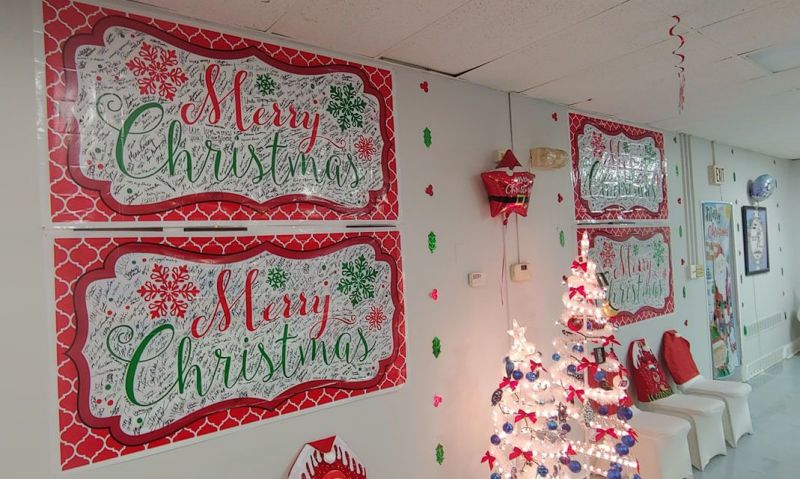 The coronavirus pandemic has impacted nearly every facet of life in the United States, including the lives of those living in Department of Veterans Affairs facilities. Many of those residents have gone 10 or more months without any outside visitors.

But for those at the Wilkes-Barre VA Medical Center, there have been regular reminders during the pandemic that those veterans are not forgotten – thanks to the Pennsylvania District 12 American Legion Family.

An effort that started nearly eight years ago to bring food, fun and camaraderie to the Wilkes-Barre VAMC residents has been adapted during the time of COVID-19. District 12’s American Legion Family has found creative ways to still bring holidays such as the Fourth of July, Veterans Day, Memorial Day and Father’s Day to those veterans, including from the facility’s parking lot.

Those efforts continued over the holiday season, when District 12 provided both Christmas and New Year’s Eve celebrations for Wilkes-Barre VAMC. Food, Christmas cards, caroling, and New Year’s Eve pizza and snacks all went to showing the VAMC’s residents one simple fact.

“It’s all about them and letting them know we care and we remember them,” said District 12 Canteen Fund Representative Nicole Guest, a member of American Legion Post 350 in Nanticoke. “They’re our family. It’s like watching 150 of your close family members suffering. We couldn’t leave them behind.”

For Christmas, the district normally stages a party for the VAMC residents, but the pandemic halted those plans. Adapting, District 12 Legion Family members instead gathered at Black Diamond American Legion Post 395 in Kingston to assemble offerings for the residents comprised of 400 assorted Christmas cookies from Schiel’s Family Market, and two large party trays of sliced pumpkin rolls and nut rolls. The district also provided $500 in bingo cards for the residents, as well as Christmas cards.

Guest said she’d normally hang up a Merry Christmas banner at the VAMC, but because she couldn’t physically do that this time, she decided to write “I love you. Nicole” on it. “Then I thought ‘this is it. It’s a Christmas love letter,” she said. “So I got three more (banners) from Party City, I contacted all of our (District 12 posts) … including our very good friends at Post 859 in Newfoundland in District 15 … and everybody signed. That was our idea … that would be our Christmas love letter to them: all of our signatures that we all took the time to sign this because we couldn’t be with them. And it just took off.”

Photos of the banners, as well as the decorations hung up at Post 395 to look like how the district’s Christmas party for the VAMC normally looks, were shared with the residents, as was a special video of dozens of American Legion Family members sending a group Christmas greeting and singing carols.

“It was awesome to see in person,” Guest said. “We couldn’t wait for (the patients) to get the videos.”

On New Year’s Eve, District 12 normally would decorate a room at the VAMC and then provide the residents with a party while watching the Times Square Ball drop at midnight. Instead, this year the district sent the VAMC residents 350 bags of individual assorted potato chips, 35 boxes of assorted Tastykakes, 35 boxes of assorted individual cookie and snack bags, 14 extra-large pizzas and 10 extra-large stromboli's.

“We just get what they want, and we just stock them up,” Guest said. “No other organizations have the resources that we do.”

Guest said she’s thankful that District 12 had started their regular support for the Wilkes-Barre VAMC residents years ago, which made it easier to transition to providing that same support in a socially distanced and safe manner.

“I’m so grateful that our district has a VA (where) we can serve our veterans,” Guest said. “But something like this … having that relationship with the VA … it was already established. It was just that wonderful trust in that relationship that we have. When the pandemic hit … we had to do something.

“And for the veterans to look out and see familiar faces – they were already family to us – the vets looking out their windows and yelling our names, it’s so overwhelming. We could have never done any of this without having that relationship.”