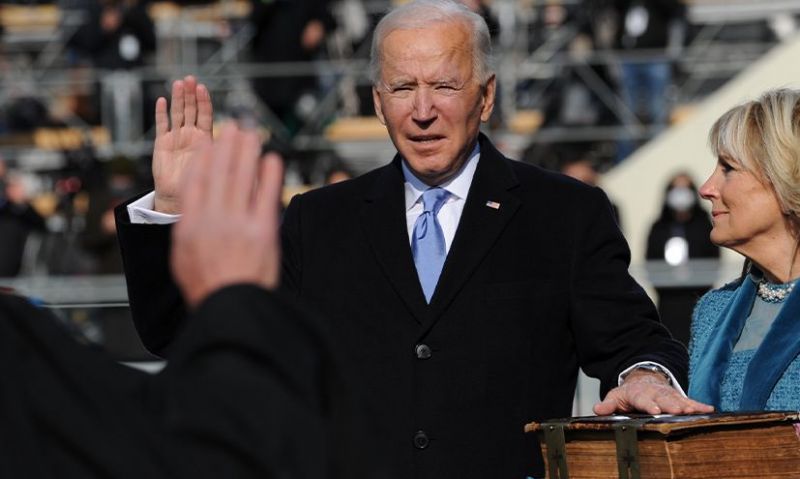 Just before noon Jan. 20, Joe Biden took the oath of office of as the 46th president and commander-in-chief of the United States.

Biden begins his presidency as America grapples with a range of issues including political infighting, which escalated into a recent attempted insurrection at the United States Capitol, serving as a backdrop to his speech. Additionally, the new administration will face monumental challenges such as bringing the COVID-19 pandemic under control, ensuring the nation's security from enemies foreign and domestic, and healing racial injustices.

He noted that the coronavirus had taken more American lives than were lost during World War II. Additionally, millions of jobs have been lost and businesses have stumbled into difficult times.

"This is a great nation," Biden said during his roughly 20-minute address as part of a largely virtual inauguration. “We are a good people and over the centuries through storm and strife, in peace and in war, we have come so far. We still have far to go.”

Biden takes on the role of commander-in-chief with a lengthy track record on defense and diplomacy. His work as a senator offers clues to how he will approach issues related to defense and national security.

“The American Legion Family congratulates President Biden on assuming the most powerful position in the free world,” Oxford said. “We are eager to work with the administration to improve the lives of our military, veterans and their families. As the nation’s largest veterans organization, our members are dedicated to strengthening America. We also promise to uphold and defend the Constitution of the United States. We offer the same assistance and support to the new president as we have to all of his predecessors since our founding in 1919.”

There are scores of bills in the halls of Congress that will affect veterans. As Congress debates the legislation, some bills will surely end up on the president’s desk. This week The American Legion’s Tango Alpha Lima podcast welcomed the organization’s legislative director, Lawrence Montreuil, to discuss the Legion’s legislative priorities for the 117th Congress. Download and listen the episode here.

Following the inauguration, Biden and Vice President Kamala Harris, along with their spouses, Jill Biden and Douglas Emhoff, conducted a review of the military and laid a wreath at the Tomb of the unknowns at Arlington National Cemetery.

“Here we stand, across the Potomac (River), across from Arlington Cemetery, where heroes who gave the last full measure of devotion rest in eternal peace,” Biden said during his address. “And here we stand, just days after a riotous mob thought they could use violence to silence the people, to stop the work of our democracy, to drive us from this sacred ground. It did not happen. It will never happen. Not today. Not tomorrow. Not ever."

Biden and Harris were sworn in as tens of thousands of National Guard troops provided unprecedented security for an inauguration around the nation's capital.

“The rise of political extremism, white supremacy, domestic terrorism we must confront and we will defeat,” Biden said. “To overcome these challenges and restore the security and soul of America requires so much more than words. It requires the most elusive of all things in a democracy: unity.”

Biden acknowledged how democracy survived a true test as unfounded allegations were aired since his electoral victory in November. “We have come so far but have so much to do. We have much to heal, much to build, much to gain.”

D.C. Police Officer Eugene Goodman, heralded for his role in protecting the U.S. Capitol during the insurrection, was named Acting Deputy House Sergeant at Arms. Goodman escorted Harris as she arrived for Inauguration Day. The violence at the Capitol was a theme Biden touched on throughout his address.

In reference to the violent uprising, Biden said, “We must end this uncivil war.”