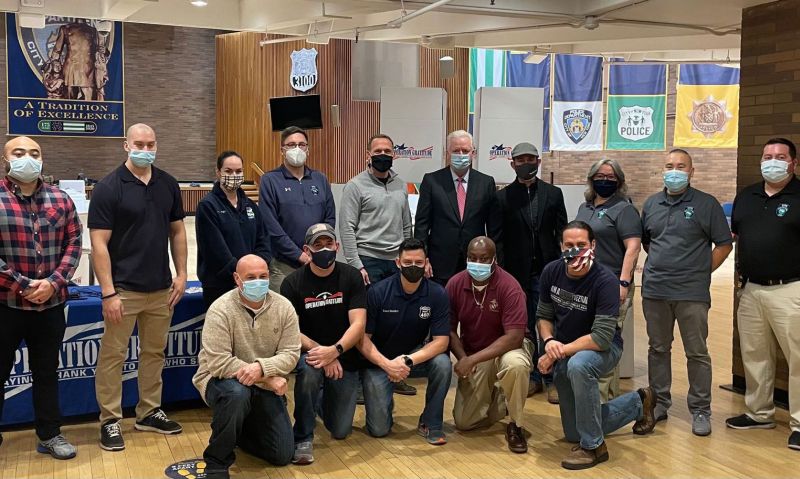 An effort underway to thank more than 30,000 New York Police Department officers and 9-1-1 dispatchers began earlier this month and will finish up prior to the 20th anniversary of 9/11. And along the way, there will be a strong American Legion presence involved in the effort.

Before September rolls around, care packages will have been distributed to every officer and dispatcher in the NYPD, thanks to a collaboration between the department and Operation Gratitude, a national nonprofit that strives to build and strengthen the bonds between Americans, and members of the U.S. military and first responders through volunteer service projects, acts of gratitude and meaningful engagements in communities nationwide.

The American Legion side of the effort is being spearheaded by NYPD Sgt. Wilem Wong, a 20-year member of Lt. B.R. Kimlau Chinese Memorial Post 1291 who also is regularly active with New York City Police Post 460. Wong has spent more than 30 years in the U.S. Army Reserves – including as a combat medic, nurse and civil affairs officer, with deployments to both Iraq and Afghanistan – and currently is a lieutenant colonel based in New York City.

On the NYPD side, Wong is a sergeant assigned to the Health & Wellness Section, which is coordinating with Operation Gratitude to provide the care packages.

For Wong, there are constant reminders of 9/11. In addition to working in the South Tower less than two years prior to the attack, his current office has a view where the World Trade Center once stood.

“I actually see this out of my window every day,” said Wong, who wrote an article for The American Legion Magazine in 2015 about the U.S. decision to go to war after 9/11. “It comes full circle.”

Wong brought Post 460 on board to assist with the effort, reaching out to frequent collaborator and Post 460 Commander Benjamin Eill, an NYPD detective squad supervisor who said he works together with Wong on veteran-related initiatives within the police department.

“Wilem designed the whole master plan, and I use my personnel to execute the plan,” Eill said. “When Wilem takes delivery of (the care package items) at One Police Plaza, it needs to get sorted through. I provide the personnel to sort through and (assemble) the packages to be disbursed through the police department.”

Eill’s “personnel” are members of Post 460, who will be filling a similar role monthly of assembling all of the care packages to prepare them for distribution throughout the department. The care packages include hand warmers, bracelets, lip balm, coffee, chocolate bars, jelly beans and a hand-written thank you note.

Eill, who served in the U.S. Coast Guard from 1995-2016, said the effort will mean a lot to the recipients. “I remember when I was overseas getting care packages from the Girl Scouts and the Boy Scouts, and this and that,” he said. “It means a lot to show that people care, especially in this day and age.”