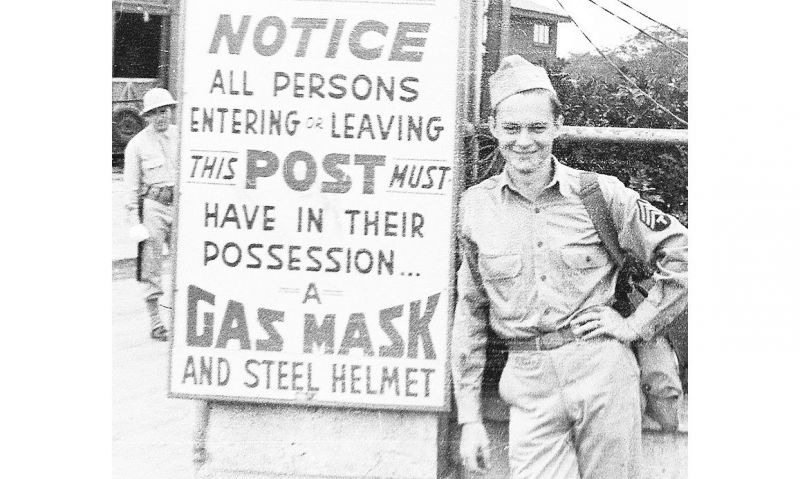 World War II veteran and former Maine Legionnaire Richard Perkins was a radio operator stationed at Fort Shafter in Honolulu. When he passed away in 2014 he left behind nearly 700 negatives of photos he took during his service. His son, Dana, is trying to learn more about those individuals in the photos.

Richard Erlon Perkins was a U.S. Army radio operator stationed for a period of time at Fort Shafter in Honolulu during World War II. A member of American Legion Post 42 in Damariscotta, Maine, when he passed away in 2014, Perkins didn’t speak much about his time in the military, according to his children.

But after his death, Perkins’ children found a window to that service – in the form of more than 670 negatives from photographs taken by Perkins with a Kodak Pony camera while in Honolulu, as well as some when he was stationed at Fort Ruger and in Saipan. The negatives include shots of fellow servicemembers, USO entertainers, and local residents and tourist attractions.,

Perkins’ children, Dana Perkins and Alice Smith, want to know more about the people in the photographs. The National Personnel Records Center fire of 1973 made it impossible for his children to find any military records from Perkins’ unit, so now they’re reaching out to the public for help.

“It was a cookie tin … and it’s full of all of these developed negatives, rolls of film,” said Dana, who lives in Saco, Maine. “My sister didn’t know what to do with them, and we didn’t really know what they were. There was a label on the can saying the dates, and I’m like ‘these are from when he was in Hawaii and Saipan.’”

Dana started looking at the negatives, and what stood out to him about his father’s photos is that they show fellow servicemembers relaxing, playing games, interacting with local civilians and going about their day-to-day lives on base.

“None of them are bullets and bombs. None of them are combat photos,” he said. “They were just like life on the base. What the guys do on their down time. And most of the pictures, other than tourist attractions, are people that he worked with. So to me, they must have been important to him.”

Dana has spent hour upon hour converting the negatives over the digital images, along with conducting more than three years of research. Through various Facebook groups, Dana has been able to get information about the photos, such as location and the “decoding of military terms. But one thing they can’t tell me is who are these people.”

To help in that effort, Dana has uploaded the images onto his website – the World War II Pacific Veterans Project – with the hopes others will see the photos and be able to identify the people in them. He’s also been reaching out to various media outlets throughout the nation to share his quest for information.

He also received assistance from historians such as Milton Migita, a curator at the U.S. Army Museum of Hawaii. And Migita went a step further to assist Dana with his project.

“I’ve never been to Hawaii, but one of our sons went to Hawaii a couple of years ago,” Dana said. “I put him in touch with (Migita) … and he literally took my son around for a couple of days to the same spots where my dad was. They took pictures of (my son) standing in the same stops as my dad.

“So for Christmas that year, my son … provided me with composite photos of the original photo of my dad in his uniform standing in certain spots, and (my son) standing in the partner photo in the same location. It meant a lot to me.”

Dana also has converted over to digital two 8mm movies his dad shot while in the service. He’s uploaded them here and here. Dana said one of the videos shows smoke rising in the background that has been identified as coming from the West Loch Disaster in May 1944.

“We’re making progress, but you can only do so much research,” Dana said. “So what I want to do is before the end of this year, I want to get the entire photo collection up on the website, and I will add all the information that I’ve gathered so far for each photo, and at least get them out there so that more people can visit the website and see the photos in their entirety, not just the cropped headshots. Maybe we can get more information that way. We have to start somewhere.”

Dana said that once all of the photos and movies have been uploaded to his website, he and his sister will donate the originals to a military museum or historical archive. Dana said several already have expressed an interest in taking them.

Dana is asking that anyone that recognizes someone in the photos contact him either by email at info@ww2pacificveteransproject.org, or by mailing him at the World War 2 Pacific Veterans Project, P.O. Box 789, Biddeford, ME 04005. Any time a family makes a positive identification of anyone in Richard's photos, Dana will send them high-resolution copies of the complete photos their loved ones appear in for free.

“These people were important to dad, so who are they?” Dana said. “Why were they important to him? And why did he spend his small resources at the time taking pictures of these people? That’s kind of got my curiosity up, because he didn’t talk about the people (during his service). But he took all these photos. That’s why we’re trying to find out who they are.”