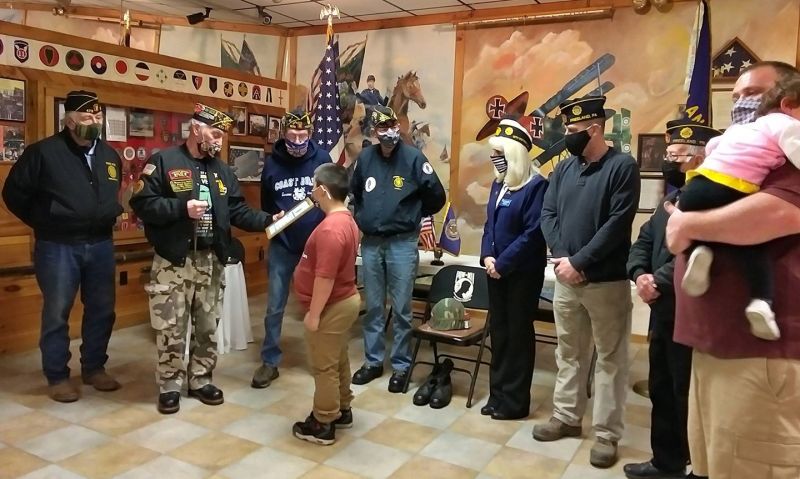 On March 24 while in the backseat of his parents’ car, 8-year-old Jaxon Dempsey noticed his 20-month-old sister Layla was choking on a chicken nugget. With a calm and awareness well beyond his years, Jaxon used the back of his hand to slap Layla on her back – a method he’d seen taught by World Wresting Entertainment superstar, actor and TV pitchman John Cena on Nickelodeon’s The Substitute.

The Pennsylvania youth was able to dislodge the chicken nugget, saving his sister’s life and garnering media attention both locally and from Sports Illustrated, People and even Great Britain’s Daily Mail. He’s also been honored by the PTA at his school, Heights Terrace Elementary, while around 20 fire trucks from his surrounding area came together for a parade in front of Jaxon’s house honoring the young boy.

Jaxon has been presented by letters of recognition and certificates for his heroism from state leaders. Cena even sent him a personalized video message to applaud his efforts.

And when the commander of American Legion Post 473 in nearby Freeland heard about Jaxon’s life-saving moment, he wanted to add to the list of accolades the young boy has received. On April 9, Jaxon and his family were invited to Post 473, where the hero was presented with a medal of heroism by the post’s American Legion Family.

“I just happened to see in the paper what (Jaxon) had did, and I brought it up at our Legion meeting,” Post 473 Commander Gerald Gaffney said. “I brought up giving him a medal for what he did, and everybody was good with it.”

Gaffney said Jaxon’s reaction to his sister’s life-threatening situation is what stood out to him. “When I saw that kid took it upon himself, being 8 years old, I thought ‘man, there are people who are 20 years old who wouldn’t know what to do,” he said. “At our meeting I said ‘what a great thing that kid did. We should honor him.’ And everybody was on board.”

“I said ‘there you are, a young boy. To think right away to do something to save your sister’s life … she’ll remember that when she grows up.’”

Gaffney said honoring Jaxon was another way to show its community that there is more to Post 473 than being a gathering place for veterans. “When you show people that’s not what you’re all about, it makes you feel good and it makes the community feel good,” he said. “I always feel good when we can do good things for our community.”