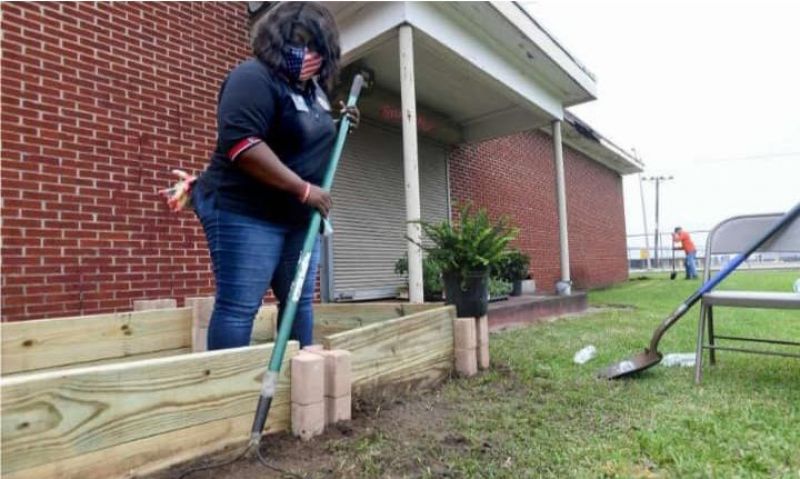 Last year, Texas Legionnaire Euphemia T. Davis walked out behind American Legion Post 33 in Beaumont, looked over the building’s property and saw potential for something more than grass.

That potential became reality for Davis and the other members of Post 33’s American Legion Family, when earlier this month the post joined members of the community in what is now the Veteran Community Garden.

Davis said her idea for the property was to “try to make it more presentable, more inviting when people come. The only things back there were a steak barbecue pit and a broken-up playground set. And then I started having this vision.”

The vision moved toward the construction stage when Post 33 Vice Commander Jonetta Andrepont reached out to the local Home Depot about getting involved with the project. The store wound up donating wooden boards, stone blocks, soil and other materials that were used to build three raised planting beds. The store also provided shrubs and trees, as well as tomato plants and herbs.

Post 33 put out a call on social media, inviting the community to assist with the effort. Davis also shared the invitation with members of her Sigma Gamma Rho sorority at Lamar University. More than a dozen volunteers showed up April 10 to help with the project, including members of Post 33’s American Legion Family. After the playground set and other items were removed, planting began.

The garden includes lemon and lime trees, watermelon, squash and various herbs and spices, with more produce planned for the future. Home Depot’s James Eller helped get the garden started and will continue to work with the post on what can be planted during certain times of the year.

Davis said the fruit and vegetable trees will be used to “share in the community, because there’s a lot of homeless downtown, and there are a couple of organizations that feed the homeless every day. If these trees produce fresh fruits, fresh vegetables … we can share with within our post and with other organizations. If we can grow it, we want to plant it.”

The garden has been a part of a revitalization effort that Davis said started when the post was at a point where it was “just there. They weren’t promoting anything. Now people are starting to notice us again. I saw a lot of faces of veterans I didn’t know that came out (to help), and they filled out paperwork so they could be members of the post. I’m hoping at our next meeting we’re going to see a lot of new faces.”

In addition to providing a visual improvement to the post’s property, Davis wanted the project to provide the community with an opportunity to safely work together during the pandemic.

“It’s very important to do something like this,” Davis said, noting safety protocols were maintained during the April 10 event. “We need to start planting things and create a nice environment before things go back to the way they used to be.”