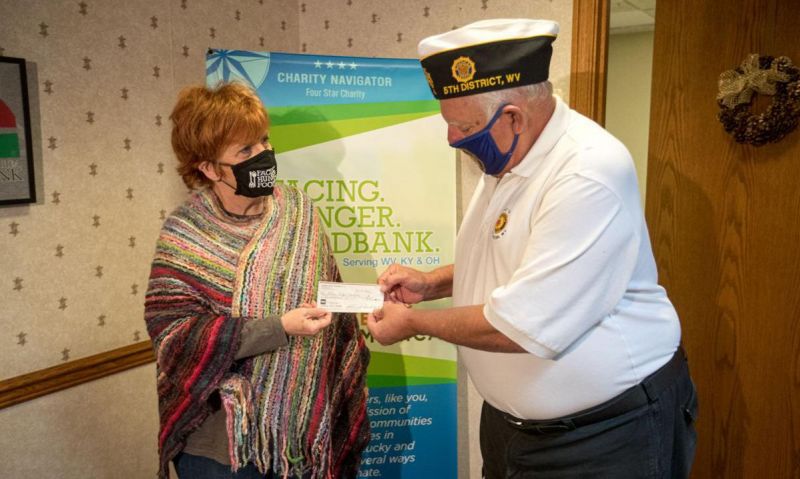 So Harshbarger decided to put his money somewhere he felt it would matter more: helping those impacted by the pandemic. After receiving each check, he’s turned around and donated the money to the Facing Hunger Foodbank in Huntington – $3,200 worth of donations that will go toward funding more than 37,000 meals through the food bank.

“I’ve been very blessed in my life,” said the 75-year-old Harshbarger, who serves as the commander of Post 16 in Huntington, and as West Virginia’s Fifth District commander and department Americanism chairman. “I’ve had a good life, and basically my focus right now is giving back.”

That has included volunteering at his church’s food pantry, where he’ll provide items to stock its shelves when needed. He chose Facing Hunger Foodbank for his stimulus check donations because of its reach, which includes 17 communities in West Virginia, Kentucky and Ohio, and its impact.

“With everything going on in the last year and all the things we shouldn’t do, no one should ever go hungry,” Harshbarger said. “There are people out there now who never thought in their lifetimes they would be driving through a parking lot getting boxes of food. But this is the situation that we’ve been in and are slowly coming out of.

“The food bank has been very helpful to a lot of people in a lot of need. And as Americans, no one should go to bed hungry. That’s just the way I look at it.”

On its Facebook page, the food bank noted the value of donations while praising Harshbarger for his donations, writing, “We are always hopeful that a donor continues their partnership with us. In the case of Mr. Shannon Harshbarger, American Legion Post 16 Commander and American Legion 5th District Commander, he has stepped up to the plate AGAIN. For the THIRD time, Mr. Harshbarger has donated his stimulus check in support of the food bank. This gift will provide 12,600 meals to those in need, at a time they are needed most.”

Harshbarger said all eight West Virginia counties serviced by Facing Hunger Foodbank are in his Fifth District. “Some of the people I may be helping … may be a fellow veteran,” he said. “For me, I would like to instill this spirit in the other veterans who have prospered in their lives and done well. As individuals, we can all still help. This is a human condition more than it is an American Legion condition.”

But for Harshbarger, donating to the food bank falls directly in line with the mission of The American Legion. “The last line of our preamble is ‘to consecrate and sanctify our comradeship by our devotion to mutual helpfulness,’” he said. “What better way to give back than feed people. This is what we do.”