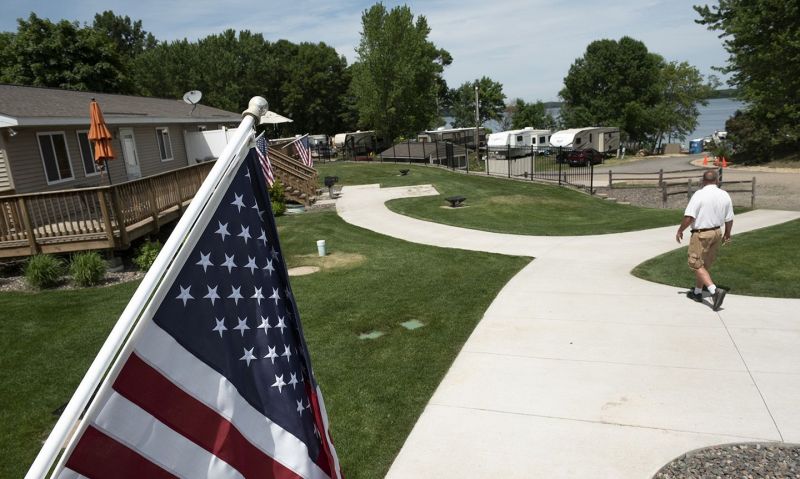 Nearly a century has passed since a Minnesota family farm was donated to serve as a place for shellshocked World War I veterans to recuperate and recover.

The Veterans Campground on Big Marine Lake, about half an hour northeast of the Twin Cities, has grown from its humble beginnings to serve some 35,000 veterans and their families each year.

“It’s a special place,” said Bob Dettmer, a member of American Legion Post 225 in Forest Lake who represents Minnesota’s District 39A in the state House of Representatives.

Once known as the Disabled Veterans Rest Camp — the campground’s board of directors still goes by that name — the Veterans Campground has grown to a 69-acre facility, with 156 RV sites and a dozen cabins built for handicapped access. There’s also a number of lakeshore and duplex cabins.

Ken Larson, the campground manager, said there’s already a long wait to rent sites in the campground, which also includes hiking trails, a dog park, and a variety of lake activities.

The campground is also the site for an annual flag retirement ceremony conducted on a rotating basis by nearby American Legion posts. The event, held on the second Saturday of June each year, draws hundreds of onlookers and properly disposes of thousands of flags from across Minnesota.

Teresa Ash, the vice commander for the Department of Minnesota’s 4th and 5th Districts, has been coming to the campground with her husband Mike and their family for years.

“It’s a place that you come to that you know you feel safe. Because it’s a campground that has no rules but has a lot of rules. The rules are that it’s a safe zone for veterans and their families. You’re not allowed to shoot off fireworks, you’re not allowed to shoot off guns; it’s quiet after 10 o’clock. But you can go fishing, you can play, you have kids’ stuff. It’s a family place that you can allow your kids to run free,” she said.

Dettmer noted that the campground gives veterans of all branches a place to mingle.

“They’re all like brothers and sisters,” Dettmer said. “Being able to have a facility like this to bring veterans together (is a benefit).”