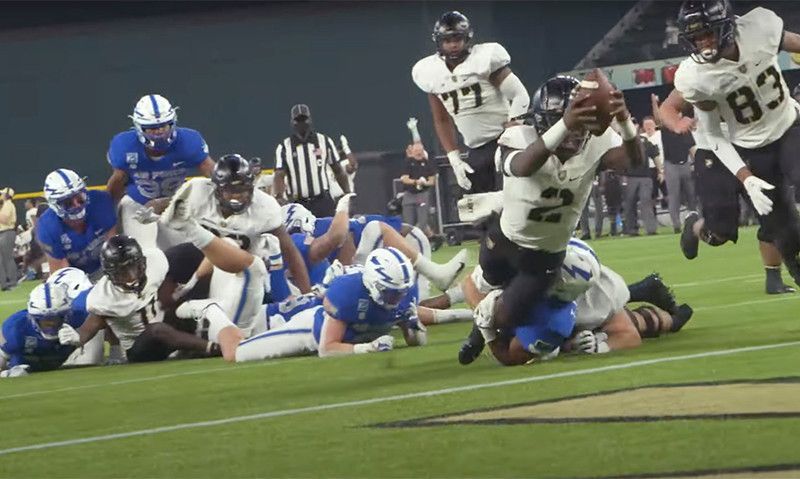 The 56th football game between Army and Air Force had an unusual amount of big plays, but none were bigger than the game winner. It was a classic rush through a hole in the line, a big collision, a fortuitous bounce and a storybook case of being in the right place at the right time.

In the end, Army got past Air Force, 21-14 in overtime, in Saturday’s Lockheed Martin Commanders’ Classic presented by USAA at Globe Life Field.

The Dallas-area stadium was within reasonable driving distance of a pair of Army bases and a trio of Air Force bases, which helped boost attendance to 32,537 fans. They were treated to a weekend celebration of the military that featured a Friday night boxing competition between cadets from the two academies, while Saturday pre-game activities included an emotional salute to six Medal of Honor recipients.

“These Commander-In-Chief’s Trophy games are very important to our team, our institution and the United States Army that we represent,” said Army coach Jeff Monken. “More than anything, I’m proud to be here to represent this victory for the men and women who serve. It was a hard fought game – both teams just gutted it out. And, fortunately, we made one more play when it counted there at the end. It’s particularly great to win a big rivalry game for an incredibly coveted trophy and chance to go to the White House if we win the next one (against Navy). That’s a big deal.”

With its win, Army earned the right to retain possession of the Commander-In-Chief’s Trophy. If the Black Knights win the Army-Navy game on Dec. 11, they will earn the right outright. If Navy, wins, all three teams will have won one game this year and in a three-way tie the possession of the trophy goes to the team that won it last (Army in 2020).

“When you play this game, there’s so much emotion that it’s hard to keep it in check,” Monken said. “You want to win so bad that, instinctively, you just want to line up facing the guy across from you and kick his butt. But you’ve got to stay focused on the job, play with great fundamentals and remain poised. You can’t allow the emotion to cause you to make poor decisions. I think our guys balance that really well – the raw emotion, the will to win – with doing job, and (today) we made just enough plays to win. It’s been six weeks since we won a game – it feels like forever. It was a great football game and (it’s) certainly very exciting to win it. I’m proud of (the Army team) and they should be proud of themselves.”

Army and Air Force entered the game as the only teams averaging more than 300 yards on the ground per game. However, the contest was surprisingly livened up by strong second-half passing attacks that left the scored knotted 14-14 at the end of regulation. Air Force (6-3) won the overtime coin toss and elected to defer possession since both teams would get a chance to score.

“I wish we didn’t have to throw it,” Monken said. “We like it a lot better when we can just run the ball and do our stuff. But credit to them (Air Force) – they were doing a good job stopping us. When we have to throw the ball, it’s usually not a great formula for us to win because we are a running football team and we try to control the clock and keep it (the ball) away from the other team. I think it’s just a credit to both defensive coordinators that they did such a good job of stopping the run.”

Two plays into overtime, Army (5-3) was on the Air Force 23 needing 8 yards for a first down. Army quarterback Christian Anderson dropped back and found his favorite target, wide receiver Isaiah Alston, who grabbed his fourth pass of the day and dashed 12 yards to the Air Force 11.  Anderson followed with a two-yard charge straight ahead and fullback Tyrell Robinson added three more on the next play, leaving the Black Knights with a third-and-five situation on the Air Force 6.

After an Army time out, Anderson kept the ball and bulled his way to the Air Force 2, where he was hit and dragged down by Falcons linebacker TD Blackmon. Before Anderson’s knee touched the turf, the ball popped out, crossing into the end zone. Army left tackle Jordyn Law jumped on the ball, giving Army the game-deciding score.

“I was just trying to get in the end zone,” said Anderson, who finished with seven completions for 175 yards, “but they made a good play and I got stripped (of the ball). I got lucky – he (Law) was right there and he made a great play. We knew this was going to be a really tight game. They’ve got a really good team, and you could see that in the way they stopped us early. It’s definitely nerve wracking to have it come down to a last drive, but our guys never stopped fighting. That’s something that we preach – ‘Don’t quit, don’t flinch.’ And our guys really responded – we executed when we needed to. ”

Law was stunned about his role on the victory.

“I was blocking my man and we’re taught to always follow the play,” the sophomore offensive lineman said. “When he (Anderson) dove towards the end zone, I could see the ball pop out so I could charge up on it. It’s very surreal. Never in my life would I have thought I would pick up a fumble and score a game-winning touchdown, especially in a game as important as this one against Air Force. I’m just happy I was able to be in the right spot at the right time.”