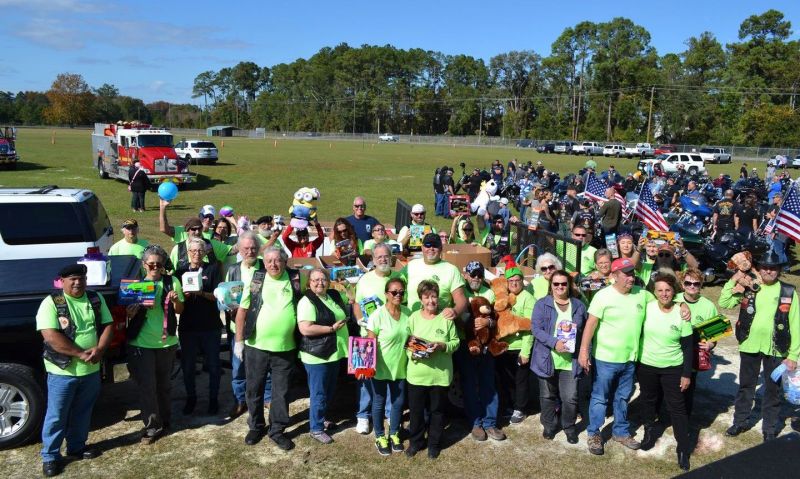 In 2018, American Legion Riders Chapter 57 in Lake City, Fla., started fundraising for the Columbia and Suwannee County Toys for Tots at the urging of Chapter Director Bill Huggins. The Navy veteran previously had been involved in toy rides before joining the Legion, and when he became chapter director “my platform was we support veterans and we support children,” Huggins said.

The chapter staged a fundraising ride for Toys for Tots that year, getting around 180 motorcycles involved while raising more than $9,000. And the chapter hasn’t stopped its efforts.

A similar ride in 2019 produced similar results. In 2020, the pandemic put a stop to the ride, but it didn’t stop Chapter 57 from fundraising for the program – to the tune of around $10,000 raised for the local Toys for Tots program.

Another ride is scheduled for Nov. 20, and before a single rider has registered, Huggins said more than $10,000 already has been raised, as well as more than $3,000 in donated toys and other retail items.

“We have a very supportive Legion Family,” said Huggins, noting he anticipates between 200 and 400 registrants. “The Auxiliary and Sons of The American Legion both made a cash donation. It’s hard to put into words what it means to do this. If we make a difference in one child’s life, it’s a success.”

The first $5,000 raised this year will go directly to Toys for Tots, as will the collected toys. The remaining funds raised will be divided among other military and veteran charities, possibly including the Department of Florida’s Project: Vet Relief.

This year’s event will start at Honda of Lake City – which is the exclusive auto sponsor of the event – with registration and finish at Post 57. The day will include food and vendors, live music, a classic car cruise, raffles and a 50/50 drawing. The first 250 entries will receive a $15 Texas Roadhouse gift card. Each registrant also brings an unwrapped toy.

While registration is happening at Honda of Lake City, American Legion Post 57 will be hosting the Mobile Military Museum, which is sponsored by the American Military Historical Society. The display features items from the 1800s all the way through the Vietnam War, including weapons, uniforms and memorabilia.

“We got the information out to the schools, and it’s kid friendly, so we’re urging parents to bring their kids,” Huggins said. “There’s no charge for them to go in. It’s strictly a donation.”

“To be a Rider, you first have to be a Legion member – Legion, Auxiliary or SAL,” Huggins said. “The Riders are the face of the Legion. Our Riders are very active in the community. And I’ve got a damn good group of Riders.”