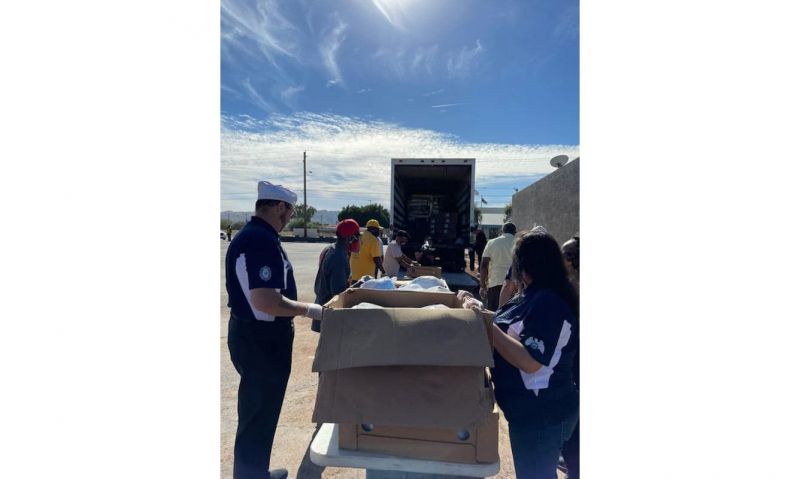 Another Thanksgiving has come and gone, and another example of the American Legion Family’s generosity and concern for others has been on display in communities throughout the nation.

Whether it was providing food items for families to have their own Thanksgiving dinners, or providing sit-down or carryout meals, Legion Family members ensured those in need their cities and towns were able to enjoy the day.

In Arizona, members of Travis L. Williams Post 65’s Sons of The American Legion squadron in Phoenix teamed up with the HeroZona foundation and other volunteers to hand out hundreds of free turkeys the Monday before Thanksgiving. An estimated 1,000 families were assisted by the effort, which drew both national and state attention.

ABC World News Tonight with Peter Muir featured a mention of Post 65’s efforts on its Nov. 24 broadcast. And Arizona Gov. Doug Ducey came to Post 65 to join with the Sons, HeroZona and others to distribute the turkeys.

“It took teamwork to persevere through all the challenges of COVID-19, and events like the Thanksgiving Turkey Giveaway show us all that Arizona will have that same sense of camaraderie for decades to come,” Ducey said in a statement.

A.P. Powell, a member of Post 65 and HeroZona’s founder, said via a statement that “we want to make sure that underserved families in South Phoenix have the opportunity to enjoy Thanksgiving with their loved ones — no matter their circumstances. With the annual Thanksgiving Turkey Giveaway, we are able to reach more community members in need and help them put food on the table this holiday season. I thank Gov. Ducey, our team at HeroZona, the Sons of the American Legion and all the volunteers who took time today to support fellow Arizonans.”

In Colorado, members of American Legion Riders Chapter 58 in Fountain also worked ahead of time to assist others with having a Thanksgiving meal. On Nov. 13, the Riders teamed up with the Fountain Police Department to deliver 20 Thanksgiving meals to families struggling financially. And five days later, the Riders joined with students and staff from Fountain-Fort Carson School District 8 and Fountain police officers to distribute free meals to hundreds of district and military families in need.

But those efforts are just the tip of the iceberg. The following examples are just a few more ways American Legion Family members helped deliver Thanksgiving meals to others. Please remember to share your efforts at www.legiontown.org so others can read about successes and perhaps learn from them.

In Salinas, American Legion Post 31 continued its 21-year-old tradition of handing out hundreds of Thanksgiving meals to anyone in need. Around 500 meals were estimated to be served this year.

"We've been doing this for over 20 years at the American Legion. We pay for everything, we do a full meal," Post 31 Legionnaire Tony Virrueta told KION 5/46. "We just want there to be a scene of family.”

In Lewes, American Legion Auxiliary Unit 17 donated seven turkeys and seven grocery gift cards to Shields Elementary School to be distributed to families in need. Each year Unit 17 works with the school to provide the dinners, school supplies and Christmas gifts to those less fortunate.

In Gloucester, volunteers with Lester S. Wass Post 3’s Legion Family came to The Open Door food pantry to prepare and cook free Thanksgiving meals for more than 600 people. The post normally hosts a sit-down meal but has had to cancel it the past two years because of the pandemic. The meals are provided to seniors, shut-ins, veterans, homeless and other members of the general public in Gloucester, Manchester, Rockport, Essex and Ipswich. More than 60 volunteers deliver the meals.

In Brainerd, members of the community came to join with the Post 255 American Legion Family members to prepare more than 1,100 meals for delivery and takeout for anyone needing a Thanksgiving dinner.

In Springfield, American Legion Post 639 hosted a Thanksgiving dinner for area veterans and their families.

In Fallon, American Legion Family members from Post 16 continued its annual tradition of providing meals to senior citizens utilizing Meals on Wheels, and then serving a meal to anyone in need.

Legion Family members prepped, cooked, packaged and delivered the meals, including more than 100 to the residents of the William N. Pennington Life Center. Community volunteers and military personnel from Naval Air Station Fallon also assisted with the effort.

Post 16 Legionnaire Lance McNeil, who helps organize the volunteers and the deliveries, told the Nevada Appeal, “I love to do this. To me, it’s a big-hearted thing for this post. I have a great crew who find a way to give back.”

In Parma, American Legion Family members from Post 572 spent Nov. 23 providing more than 400 turkeys, and rolls, eggs and 10 pounds of potatoes to a community effort that provided 400 Thanksgiving meals to more than 1,100 veterans and military families.

·  In Gilbert, a year after its annual community Thanksgiving dinner was cancelled, American Legion Post 927 brought it back this year, feeding 300 people. The meal included turkey, ham, stuffing, smashed red skin potatoes, gravy, mashed sweet potatoes, pies, cake, apple cider and other items. “It really helps out the community,” Legionnaire Jim Grim told tnonline.com. “I see the same faces every year. Everyone is so grateful. This meal makes the holiday more enjoyable and brings the community together.”

· In McKees Rocks, American Legion Post 618 cooked around 300 turkey meals to serve families in need. “It’s a lot of work, but we love to do it,” Post 618 Commander Joe Bopp told KDKA 2. “We’re doing Thanksgiving dinner for anybody who needs one. We also do all the high rises in the area. We deliver them so everybody has a Thanksgiving.”

· In Williamsport, members of American Legion Riders Chapter 268 in Muncy showed up to assist with the annual American Rescue Workers community Thanksgiving distribution. More than 500 meals were distributed. “People get fed that don’t necessarily have family around or things like that, but (it’s) to help them out and make sure they have a good Thanksgiving Day holiday,” ALR Chapter 268 Director Michael Bennett told PA homepage.

In Houston, Springs Branch American Legion Post 654 served as the base for Operation Turkey, which delivered 10,000 meals to Houston families on Thanksgiving. The effort is sponsored by Exclusive Furniture, Walgreens, the Houston Police Officer’s Union and other sponsors.

“Our community is what we’re trying to teach and show that with their families out here, grandparents, the old veterans and the young veterans, and just people in general, we help each other out. That’s Houston strong,” Post 654 Commander Harold Schreffler told Click2Houston.com.