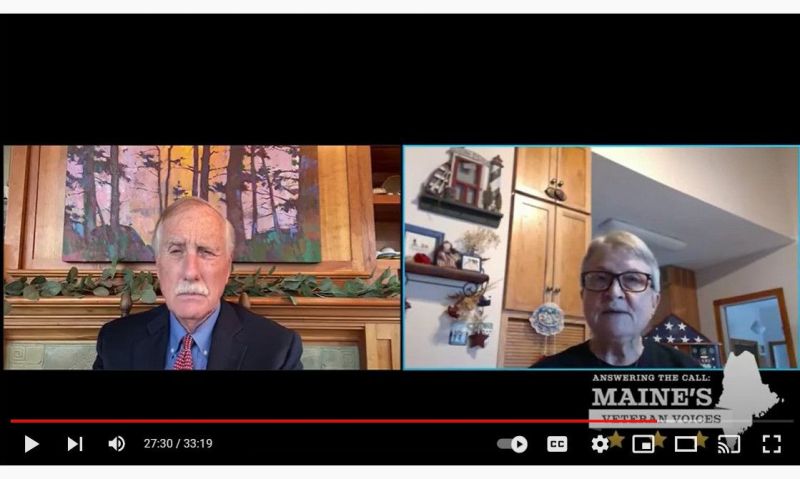 A name and face familiar to the Maine American Legion Family already has found herself a subject in the series: Department of Maine Commander Debra Couture. She was interviewed by the senator – and governor of the 1961 Virginia Boys State session – in late December.

Couture is good friends with King’s Outreach Director, Teague Morris, and has known King for years. “He’s a super guy, and I really like him a lot,” Couture told The American Legion. “I was really thrilled he asked me to do it.”

During the interview Couture shared stories about her time in the military, where she spent 25 years as a U.S. Navy medical and strategic planner. The daughter of a World War II and Korean War veteran, and wife of a veteran, Couture worked in various Navy hospitals across the nation to develop medical planning policies before being assigned to the Navy’s Bureau of Medicine and Surgery in Virginia following 9/11 to help the Deputy Surgeon General develop evaluations of casualties and injuries.

And when Hurricane Katrina struck the South, Couture was assigned to a Navy Construction Battalion, also known as SeaBees, to help rebuilding efforts. After the assignment ended, she stayed on with the SeaBees, becoming its first medical planner. She would deploy with the battalion to Iraq, Kuwait and South Korea.

Following those deployments, she was assigned to Centcom in Florida, where she helped plan medical operations for the Global War on Terror, and certified as the only SeaBee Combat Warfare Medical Officer in U.S. Navy history.

During the interview, Couture spoke about the valuable work done by American Legion service officers and also was able to touch on the veteran suicide issue, which she later told The American Legion is very personal for her.

“On active duty I was very much involved with that,” Couture said. “I had to counsel hundreds of veterans as they were coming back from deployments. We don’t want to lose them. We want to help them be able to work through whatever they’ve encountered.

“From a personal point of view, you can come home and be home for years, and then it hits you. It’s being there and trying to get the individuals, as soon as you can, to be part of The American Legion and to have people to talk to. When somebody is alone, sometimes you have too much time to think about what you’ve been through. We’ve just got to be there for people.”

That’s why Buddy Checks are so important. “I love Buddy Checks,” Couture said. “It’s not just the post-9/11 vets that consider suicide. It can be any war period. I have a relative that has PTSD a lot. I talked with that relative for years. It was about four years ago that I finally talked that person into going to the VA and getting some help. I know it’s baby steps, but there’s a lot of people out there that need help. All you can do is make those phone calls and try to find out how people are doing.”

In the interview King asked Couture about being able to bring younger veterans into The American Legion – something Maine has been successful doing. Past Department Commander and current Alternate National Executive Committeeman Matt Jabaut is a post-9/11 veteran and member of Post 202 in Topsham, which has been featured multiple times in American Legion media since it was revitalized in part by younger veterans eight years ago.

“We always use Post 202 as an example, but even in my little (Post 181) in Litchfield, we’ve had great success with recruiting younger vets,” Couture told the Legion. “I think Maine’s doing a pretty good job. I’ve had the opportunity to talk to a few (National) Guard members because I’ve been volunteering at the COVID clinic (in Bangor). I’ve recruited a few young Guard guys, and that’s been a great opportunity encountering the young men and women there.”

And Couture briefly shared her passion with King for the Legion’s programs geared toward youth and then amplified that passion after the interview.

In a press release, King praised Couture for her service. “During her 25-year career in the Navy, Deb has tirelessly worked to keep our men and women in uniform safe – shaping the policies to protect servicemembers from evolving threats and making sure they had the best medical resources possible,” he said. “As the first person, let alone woman, to hold many roles, Deb has broken barriers, and paved the path for a stronger and better armed services. I’m deeply grateful for her decades of service and sacrifice, and appreciate her continued work to support Maine’s veterans as commander of the state’s American Legion.”