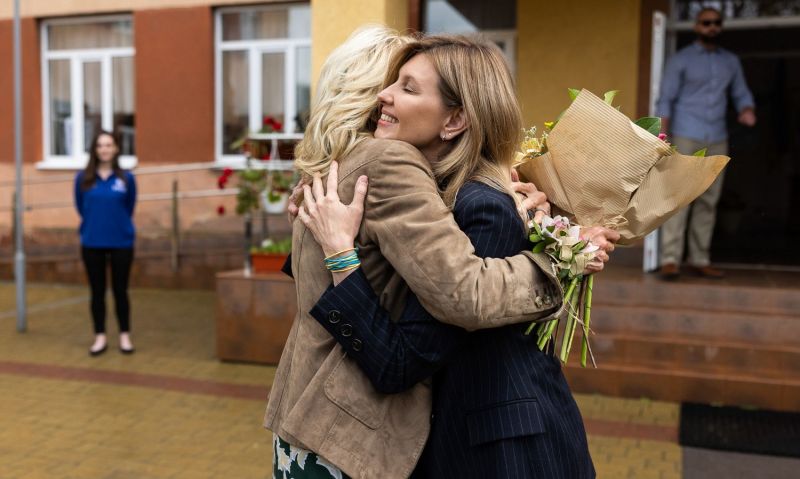 (Office of the President of Ukraine photo)

1.   Russian President Vladimir Putin used a major patriotic holiday Monday to again justify his war in Ukraine but did not declare even a limited victory or signal where the conflict was headed, as his forces continued to pummel targets across the country with few signs of significant progress.

2.   Jill Biden made an unannounced visit to western Ukraine on Sunday, holding a surprise Mother’s Day meeting with first lady Olena Zelenska to show U.S. support for the embattled nation as Russia presses its punishing war in the eastern regions.

3.  North Korea flight-tested a ballistic missile that was likely fired from a submarine on Saturday, South Korea’s military said, continuing a provocative streak in weapons demonstrations that may culminate with a nuclear test in the coming weeks or months.

4.  For the second year in a row, the Vernon Hill American Legion Riders hosted the Blessing of the Bikes fundraiser. Saturday's ride was kicked off with a prayer from Father Jonathan Slavinskas from St. Bernard's Church. This year, the riders were raising funds for the church's at-risk youth programs, as well as for Til Valhalla Heroes Truck, which is a suicide prevention program for veterans.

5.   On Friday at Joshua Memorial Park in Lancaster, Calif., an honor guard and rifle team of about 20 sailors in crisp Navy whites stood at solemn attention as the remains of Navy sailor Charles Fred Perdue were brought to his home state of California for final rest. Along with the Navy honor guard, a veterans’ honor escort from the Patriot Guard Riders and American Legion Riders Chapter 311 stood in silent respect, each holding a flag snapping in the brisk breezes to honor the sailor killed when the USS Oklahoma sank during the attack on Pearl Harbor.