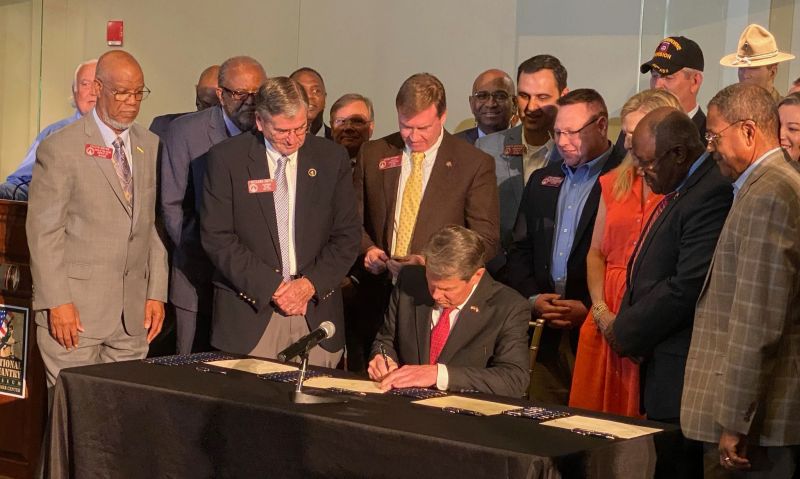 For years, American Legion Department of Georgia Commander Mark Shreve watched as military retirees left his state and moved to adjacent ones, primarily for financial reasons. While states like Alabama and North Carolina didn’t tax military retirement pay, Georgia continued to do so for retirees 62 and younger.

But that changed in late April, when Georgia Gov. Brian Kemp signed into law H.B. 1064. The legislation – for decades lobbied for by Georgia Legionnaires – exempts military retirement income up to a certain threshold. The law will take effect in July and first apply to the 2022 tax year when people file in 2023.

Shreve was there for the bill signing and said the change in the law was a long time coming. “The department has been trying to get this changed since 1977,” he said. “We attended a roundtable session (late last winter) to show our support for this bill. It was nice to see it happen.”

“What I read in the budget is (the new legislation) is an estimated loss of $60 million in Georgia state budget initially. But to me, that’s $60 million back in our veterans’ pockets. And then we keep those veterans in Georgia, and they get a job at age 42, 43. We think not only will (tax on that income) exceed that $60 million, but it will be far more beneficial to the state when they stay and work here.”

H.B. 1064 reads “Up to $17,500.00 of income received by an individual who is less than 62 years of age paid to such individual as retirement benefits from military service in the armed forces of the United States or the reserve components thereof and an additional amount of up to  $17,500.00 of such income, provided that he or she has Georgia earned income otherwise included in his or her Georgia taxable net income in an amount that exceeds $17,500.00.”

“I was proud to sign HB 1064 which creates a state income tax exemption for retired military pay for the first time in GA history,” Kemp said via Twitter. “Our heroic veterans made a sacrifice to protect our nation, and this bill rewards their service & strengthens GA's world-class workforce.”

Following the bill signing, Kemp presented his pen to State Sen. Ed Harbison, a U.S. Marine Corps veteran, Purple Heart recipient and member of American Legion Post 267 in Columbus, Ga. Harbison then gave the pen to Shreve, stating it was the Georgia American Legion that made this possible.

“(Receiving the pen) was probably one of the biggest honors of my time as department commander,” Shreve said. “That was an awesome experience. When you really think about when you’re standing there representing The American Legion and somebody recognizes that The American Legion has been behind this the whole, it’s really a moment where The American Legion can be proud that we do have a strong legislative program and we do work hard to get things done.”