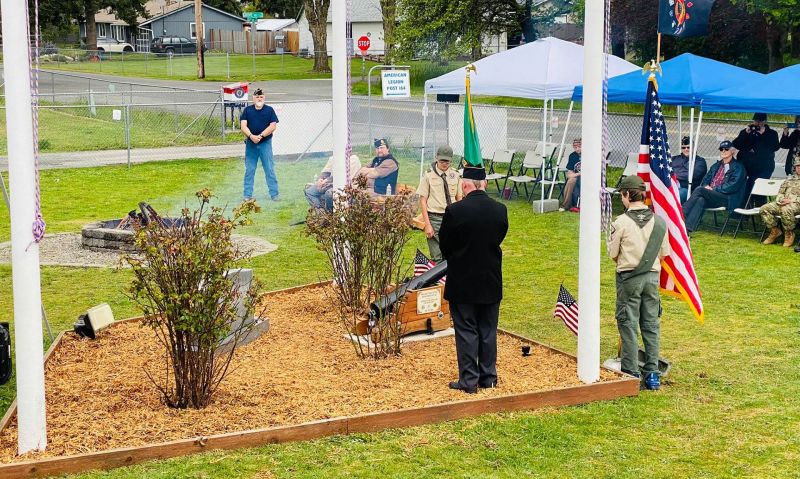 To say that the last few weeks have created a wave of emotions for members of American Legion Post 164 in Yelm, Wash., might be an understatement. But how the wave ended is what has Post 164 Commander Clay Williams smiling.

Around Easter, a 250-pound cannon that the post had installed in front of its building as part of its dedication and memorial area was stolen. The cannon was much more than a decorative item, Williams said, and it was deeply missed.

But then another local veterans organization, the Norse West Viking Festival, stepped up. The festival’s captain, William “Captain Bill” Koutrouba, heard what had happened and donated to the post a replacement cannon from his own collection. Post 164 conducted a rededication ceremony for the new cannon May 7, inviting members of the community to the celebration.

“It’s been up and down, definitely a whirlwind,” Williams said. “We went from lots of anger to disappointment to just frustration, to just having (the Vikings Festival) step behind us … it eased that frustration and really helped the camaraderie. We were filled with joy knowing people had our backs.”

Williams said that while it became obvious the old cannon could be stolen, “it was in six inches of concrete with a massive trailer chain attached to it. So no, I didn’t think it would ever be desecrated that way.”

The new cannon was installed, and military dignitaries and others were on hand at the post the first weekend of May to see it unveiled to the public.

“The ceremony itself was for the cannon, but most importantly, for our fallen,” Williams said. “That cannon is that security element for our fallen. It’s that ‘I am on guard.’ It hits a special spot.

“We’re in a small town right outside of (Joint Base Lewis-McChord). A lot of us have gone through a lot of different experiences and traumas. With everything going on in our country and how divided we are, it was a beautiful thing to see not just Capt. Bill and his Viking brothers and sisters come in behind us, but the entire community: the mayor, city council and community members. It was just overwhelming. This was something that definitely helped us rise back up and want to reinvigorate the post.”

Williams said the cannon and its location are much more than a decoration. “It had more significance than just that,” he said. “In our flagpole area we have a granite memorial, and it’s our dedication area for not just the fallen of the post, but all men and women of our nation. It was a sign not only of remembrance of them, but of security that as long as there’s one veteran breathing, we’ll remember our fallen and take care of their families that are left behind.”