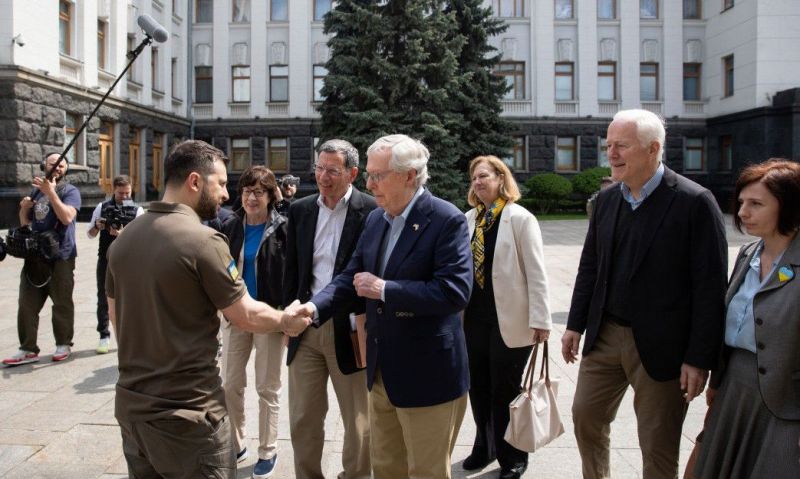 (Office of the President of Ukraine photo)

1.   Ukrainian border guards say they repelled a Russian attempt Monday morning to send troops into the northern Sumy region, which is outside the current focus of fighting. The border guard service said Russian forces deployed mortars, grenade launchers and machine guns in an attempt to cover a “sabotage and reconnaissance group” crossing the border from Russia.

2.   Meanwhile, Ukrainian President Volodymyr Zelensky met with a congressional delegation led by Senate Minority Leader Mitch McConnell in Kyiv over the weekend, and called for Russia to officially be recognized as a "terrorist state," he said Saturday in his nightly address. McConnell said in a statement Saturday evening after the delegation had "just left" Ukraine that it was an "honor" to meet with Zelensky and his senior advisers. McConnell was joined on the unannounced trip by Republican Sens. Susan Collins of Maine, John Barrasso of Wyoming and John Cornyn of Texas.

3.   Finland's government declared a "new era" is underway as it inches closer to seeking NATO membership, hours before Sweden's governing party on Sunday backed a plan to join the trans-Atlantic alliance amid Russia's war in Ukraine. Russia has long bristled about NATO moving closer to its borders, so the developments will be sure to further anger Moscow. President Vladimir Putin has already warned his Finnish counterpart on Saturday that relations would be "negatively affected."

4.   Okinawa Governor Denny Tamaki on Sunday urged Japan’s central government to do more to reduce the U.S. military presence in the southern island group as it marked the 50th anniversary of its return to Japan after 27 years of American rule, amid frustration and bitterness over a lack of support from the mainland.

5.   Seaman First Class David Franklin Tidball came home to Iowa Saturday, more than 80 years after his death at Pearl Harbor. Tidball, a 20-year-old when the Japanese attacked on Dec. 7, 1941, was laid to rest in a family plot at Mt. Hope Cemetery next to his parents, Raymon and Isabell. His remains were identified last year by the Defense POW/MIA Accounting Agency. Full military honors were performed during the graveside service, including a 21-gun salute conducted by Independence’s Sheehan-Tidball American Legion Post 30, which is named for him.