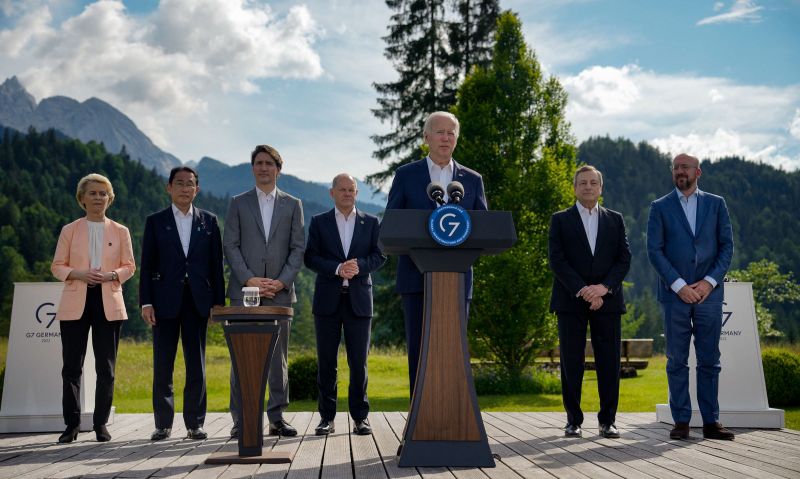 1.   The Group of Seven economic powers are set to commit themselves to supporting Ukraine in the long haul, with the U.S. preparing to announce the purchase of an advanced surface-to-air missile system for Kyiv, as leaders meet in the German Alps and confer by video link with Ukrainian President Volodymyr Zelenskyy.

2.   In February 1968, during a particularly vicious moment in the Vietnam War, a virtually unknown Marine from Camp Pendleton did the unthinkable as enemy forces turned their guns his way. John Canley, who had snuck into the service years earlier at age 15, scrambled into the open, scaled a wall, and guided wounded Marines to safety as close-quarter fire echoed in everyone’s ears. Decades later, Canley was awarded the Medal of Honor for his heroics, becoming the first living Black Marine to receive the highest medal the nation gives for extraordinary acts of bravery. And on Saturday, five weeks after he passed away at 84, he was honored again. This time it was by the Navy, which christened a massive vessel in Canley’s name at the General Dynamics-NASSCO shipyard in San Diego, during a ceremony that also represented the evolution of the military.

3.   Iranian state television said Sunday that Tehran had launched a solid-fueled rocket into space, drawing a rebuke from Washington ahead of the expected resumption of stalled talks over Tehran’s tattered nuclear deal with world powers.

4.   Almost 80 years after being lost during an armed reconnaissance mission over Germany, a Chester native has returned home. The remains of First Lt. Richard Horrigan arrived in the Ohio Valley Friday morning, landing at Pittsburgh International Airport before being escorted to his hometown by an assembly of veterans and local law enforcement. Among those was a group of approximately 30 members of the Legion Riders, who gathered at the American Legion Post 10 in Weirton before riding to the airport, where they would meet with representatives of the West Virginia Patriot Guard and others before accompanying the World War II pilot back to Hancock County.

5.   The American Legion Riders of Missouri and Kansas paid a visit to St. Joseph and the Pony Express Museum on Saturday afternoon. 210 riders on motorcycle drove down for the trip. Friday was day one of the Missouri Legacy Run and it already raised over $59,000 so far for The American Legion Legacy Scholarship Fund; by Sunday that total was more than $78,000.