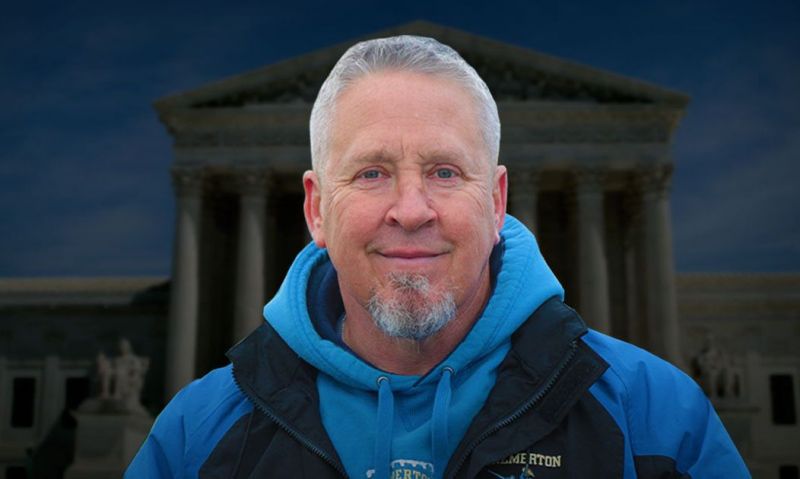 A June 27 U.S. Supreme Court ruling involving a high school football coach praying on the field following games is receiving praise from The American Legion, which filed an amicus curiae brief on behalf of the plaintiff in the case.

The Court ruled 6-3 in favor of Joseph Kennedy, the plaintiff in Kennedy vs. Bremerton School District. Kennedy, who served in the U.S. Marines for 18 years, was an assistant coach at Bremerton (Wash.) High School and in 2008 began praying at the 50-yard-line for 15-30 seconds following each game. He continued the practice for the next seven years, with players occasionally joining him.

According to ESPN.com, the school district learned of the postgame prayers, as well as those he led in the locker room, and asked him to stop. Kennedy stopped leading the locker room prayers and on the field, but said he wanted to continue praying on the field following the games. He was placed on paid leave and later was recommended to not be rehired.

In delivering the majority opinion, Judge Neil Gorsuch wrote, “The Constitution and the best of our traditions counsel mutual respect and tolerance, not censorship and suppression, for religious and nonreligious views alike. Here, a government entity sought to punish an individual for engaging in a brief, quiet, personal religious observance doubly protected by (the First Amendment).”

The American Legion has filed similar briefs in defense of religious freedom, most recently involving the Bladensburg World War I Veterans Memorial in Maryland. In its Kennedy vs. Bremerton School District amicus brief, The American Legion wrote that “Religious expression plays an important role in our nation’s longstanding traditions, acknowledging the role faith plays in the lives of many, especially those who gave the last full measure of devotion to this country. The perennial litigation against religious expression not only threatens to limit the role of religion in important traditions but also signals unlawful intolerance towards religious faith. As amicus curiae, the Legion maintains an interest in protecting the ability of governments to recognize the significance of its citizens’ faiths and in ensuring that religious expression is not excluded from civic life.

“Of course, if Kennedy had used his authority as an assistant coach to penalize students for not participating in or listening to his prayer — for example, by benching a player — he would have violated the First Amendment. In that scenario, religious conformity would have been the price of playing time. But that is not what happened here.”

In hailing the case as a victory, American Legion National Judge Advocate Mark Seavey said, “The American Legion is pleased to see that the Supreme Court ruled fairly and accurately on this case. Coach Kennedy started praying on his own, and some of his players at times began to join him – on their own. None were required to do so, nor were the prayers recited publicly. The earlier court’s decision was a clear violation of Kennedy’s right to religious expression, and we are glad to see that reversed. As we have in the past, we will continue to monitor such cases and, when necessary, provide similar briefs to those courts involved.”