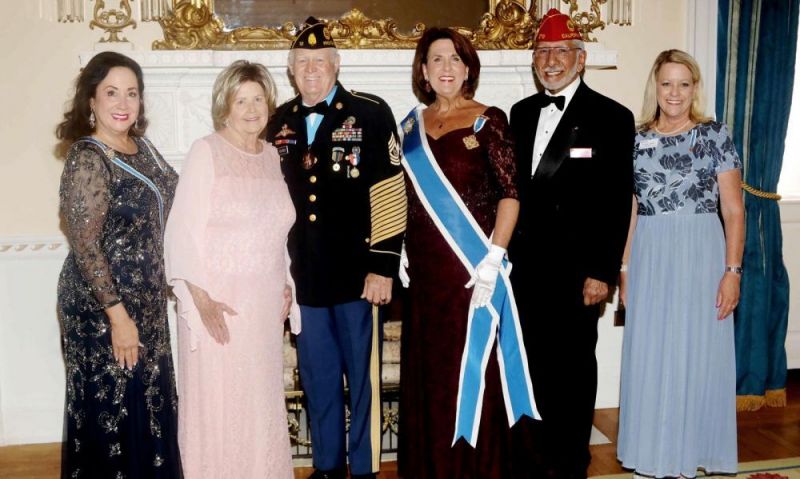 American Legion member and retired Sgt. Major Randy Edwards was awarded the prestigious Outstanding Veteran Volunteer Award by the Daughters of the American Revolution on July 2.

American Legion member and retired Sgt. Major Randy Edwards was awarded the prestigious Outstanding Veteran Volunteer Award by the Daughters of the American Revolution on July 2 in Washington, D.C.

His volunteer service began at the age of 21 when he left his small town in Arkansas to enlist in the Army. He would go on to become a Green Beret where he would serve in Panama and later in Operation Desert Storm after transitioning to the Utah National Guard. He retired from the military after nearly 38 years.

His service to the country did not come to an end when his time in uniform did. Since his retirement from military service, Edwards has dedicated thousands of hours his time to bettering the lives of the nation’s veterans.

“We have to continue serving,” Edwards said. “We have to keep giving back to our community.”

When Edwards saw two moms and their children living in a park on a rainy day, he sprang into action. He called 36 organizations and individuals, hoping to at least find them shelter for the night. Not one returned his call.

Part of the problem, said Edwards, is that the programs in Utah immediately fill up and a lot of time was lost calling around to different organizations when assistance was needed. Edwards believed that a central hub to connect people with veterans’ programs and assistance organizations would solve this problem.

Ultimately, he had to call 911 to find them emergency shelter for the evening.

“It shouldn’t have to be this way,” he said.

His experience trying to assist these two moms and their children is what prompted Edwards to found the Utah County Veterans Service Organization. The organization coordinates with different organizations to connect a veteran in need with the necessary services. This includes mental health services, housing, employment, transportation, financial services and benefits. Edwards personally recruited 200 different organizations that now provide coordinated services for veterans in Utah, according to his nomination.

In addition to founding that organization he was the first veterans mentor coordinator for the Fourth District Court in Utah, he authored the Workbook for Mentors Treatment and served as a mentor, helping veterans in need.

The Utah State Society Daughters of the American Revolution and the Utah State Regent, Kathryn Asay, sponsored Edwards for the honor.

Edwards was nominated by the Wasatch Range Chapter DAR for the award.

“The assistance and education provided through Mr. Edwards is essential in the formation of Veterans Courts, which are tailored particularly to deal with the issues and backgrounds unique to our veterans as they navigate through a civilian justice system after rendering crucial service to their nation,” wrote Kelly Schaeffer-Bullcock, Wasatch Range Chapter Regent for the Daughters of the American Revolution.

In 2019, Edwards worked alongside Sen. Mike Lee, R-Utah, to create a full-time national contact position so veterans can get help accessing previously sealed military records. Edwards personally mentored 118 special forces veterans who were seeking to unseal their military records so they could receive the benefits they had earned.

“Just because we're veterans, we're not entitled as our country doesn't owe us anything,” he said. “It's our responsibility as veterans to make sure that we're involved in our community so that we can continue to be recognized and honored as veterans.”