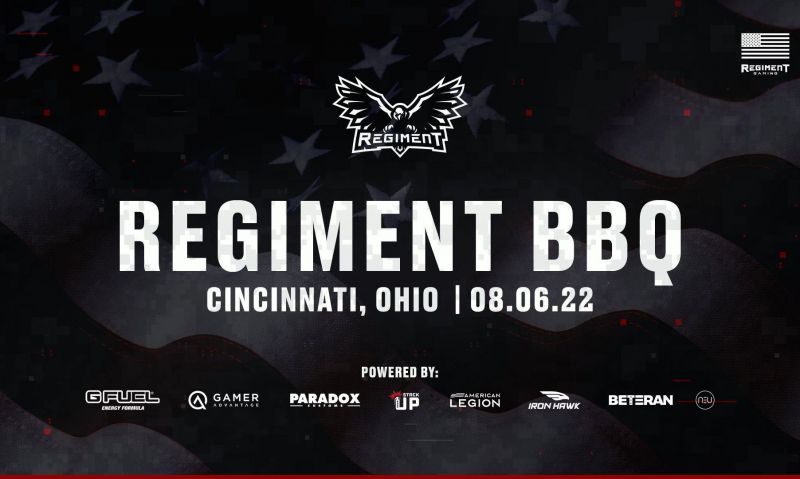 Not too long after announcing that The American Legion will host gaming station’s manned by Regiment Gaming during the 2022 National Convention in Milwaukee, the two entities again are collaborating for those veterans in the gaming community.

On Aug. 6, The American Legion is sponsoring the first Regiment BBQ. The event will take place from noon-6 p.m. Aug. 6 at Veterans Memorial Park, 906 Clough Pike, in Cincinnati, Ohio. The American Legion will cover the cost of the food and will have a booth set up to meet with veterans and military personnel who are active in the gaming community.

“We’ve done an extraordinary job of uniting veterans through the power of gaming,” said Regiment founder and CEO Chris Earl, a U.S. Marine Corps veteran. “But it comes to a point where you’ve got to put down the controller, you’ve got to go outside, you’ve got to build that real-life camaraderie. Face-to-face connections with other veterans and servicemembers.

“It’s just a lot different interacting with someone in person as opposed to online. And it’s also a great opportunity for these veterans that that have been gaming with people that they’ve met in Regiment for the past few months or few years to finally meet their gaming best friend in person.”

Last December, The American Legion and Regiment Gaming hosted an online video gaming tournament between veterans and pro-gamers that was viewed by more than 25,000 people. The following February, the two entities again partnered, this time bringing in Department of Minnesota Service Officer Jeremy Wolfsteller for an online Department of Veterans Affairs assistance workshop that provided information on various benefits available to veterans, as well as how to get them or reapply if previously denied.

Regiment and the Legion again collaborated last May, this time for a Halo Local Area Network (LAN) team tournament that included a Legion-funded $10,000 prize purse.