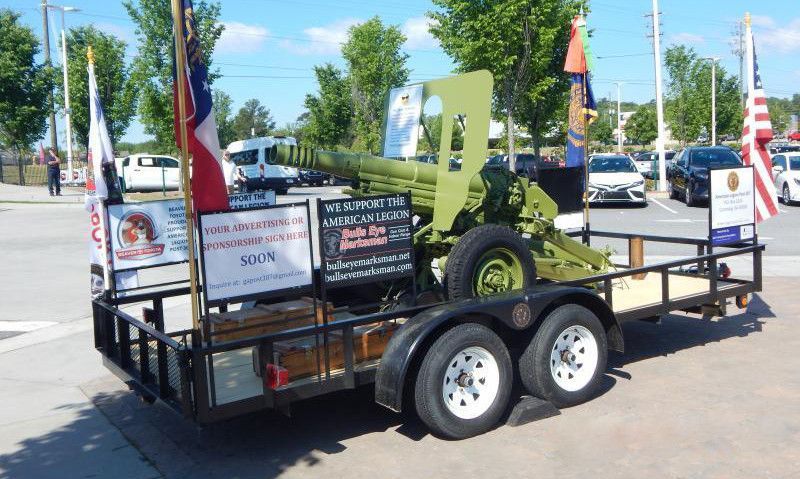 Terry Dodd joined The American Legion three years ago after the Let Everyone Get Involved in Opportunities for National Service (LEGION) Act was signed into law by President Trump on July 30, 2019. The legislation declares the United States has been in a state of war since Dec. 7, 1941, opening the door for approximately 6 million veterans to access American Legion programs and benefits for which they previously had not been eligible.

Shortly after joining Post 307, Dodd heard about the availability of an Italian-made 105mm howitzer that had been captured by the U.S. 3rd Army in Iraq in 1991. “I was immediately intrigued because I could see that it had the potential to be a visual interest in the community,” he said. After speaking with the post commander about his vision, Dodd made it his project to restore the cannon.

“I realized it was going to take some serious money to refurbish and repaint and get a trailer,” Dodd said, so he called local organizations for support. A custom painting company offered to paint it at no charge. “I said, ‘You what?!’” They painted the howitzer, its trailer and the missing 5mm ballistic shields that had to be manufactured and welded on at a discounted price, as well as added four 24x18 steel sign frames to the trailer so the post could sell advertising.

Named “Howie,” Post 307 pulls the howitzer trailer in the town’s parades for Christmas, Fourth of July, Armed Forces Day and more, and the post takes it along for donation drives at Walmart. “Anything that we are involved in, we are going to take our howitzer,” Dodd said. “It interests people; the kids go nuts. It works well for attraction.”

Another attraction tool for Post 307 has been American Legion Boys State and Auxiliary Girls State programs. Over the past three years, the post has sponsored 87 rising high school seniors to attend Boys or Girls State. For 2022, Post 307 sponsored Jason Eappen who was selected to attend American Legion Boys Nation in Washington, D.C., last month.