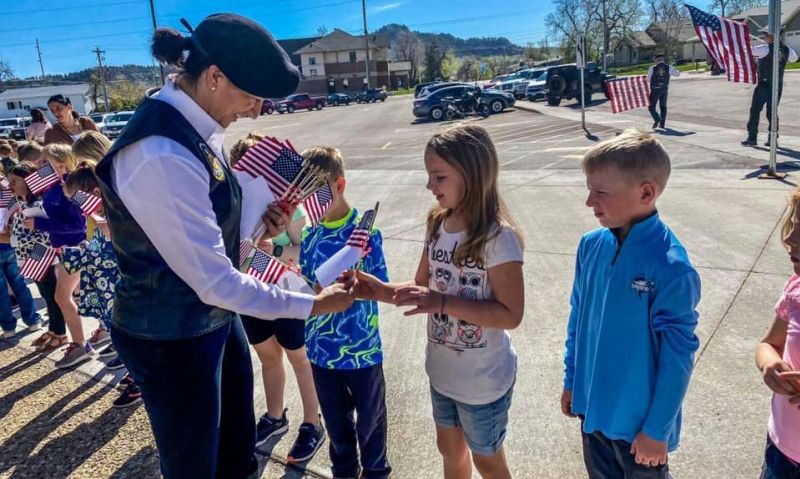 A South Dakota American Legion Family member will head to Orlando, Fla., on Oct. 30 as one of the 25 finalists for Ms. Veteran America. In addition to meeting a lot of who she now considers friends through the competition, she’s also learned quite a bit about an issue sometimes overlooked: the homeless women veteran population.

Ms. Veteran America serves as an ambassador for Final Salute Inc., a nonprofit that provides homeless women veterans and their children safe housing, along with food, clothing and supportive services. It was learning about Final Salute and doing research on her own that made Legionnaire Kaylan "Katie" Harrington aware of how many women veterans find themselves without housing.

“I’ve been so lucky – and I always say this – but I’ve always had a support system,” said Harrington, a member of American Legion Post 33 in Sturgis, as well as both Auxiliary Unit and American Legion Riders Chapter 164 in Spearfish. “When I came home (from deployments), my husband is a veteran, my dad was a Vietnam veteran. I’ve been a member of The American Legion … so I always knew I had somebody there.

“The more I started reading about what these women are going through when they come home, I can’t imagine being in their shoes. And I could have been in their shoes so easily. So that was one of the biggest motivating factors for me.”

But it hasn’t just been research that has brought to issue of homelessness to the attention of Harrington, an ER tech while she finishes nursing school. “I work in the emergency room here in Rapid City, and I’ve seen homelessness on the rise, and not just with veterans but across the board,” she said. “It became really personal to me. It’s just been amazing to represent not just women, but veterans, anybody that’s serving. So many different people have reached out to me and said, ‘Hey, this is such a great cause you’re taking on.’ It’s been awesome.”

Harrington is a 21-year member of the South Dakota Army National Guard, where she serves as a training officer at the Guard’s Warrant Officer Candidate School. A chief warrant officer 4 who has been deployed four times to Iraq and twice to Afghanistan, she said taking part in Ms. Veteran American was a reach for her.

“I didn’t think this was something I could do, because it’s out of my comfort zone,” she said. “I knew a couple of girls that (competed) last year that I had served with. I saw the difference they were able to make. This year I just kind of jumped on it and took a leap of faith. And I’ve absolutely loved every second of it.”

Harrington applied to be a part of the competition and then competed in the semifinals in June, when contestants had to go through interviews, and talent and advocacy competitions, as well as turn in documentation as to how much each had raised toward and promoted Final Salute. Harrington was one of the finalists chosen to compete in the finals Oct. 30 in Orlando.

During the competition she’s raised around $6,000 for Final Salute Inc., and “I can only see that number going up in the next month,” she said, adding that Post 33 already has donated to her cause and also will host a fundraiser spaghetti dinner on Oct. 13, from which it will donate all the funds from that to Harrington’s cause.

It’s making that kind of impact that has driven Harrington. “It’s 100 percent more about the cause than winning,” she said. “Win or lose, I’ve met so many amazing people. With girls that are competing I’ve gotten very, very close. We’re good friends now. We talk every single day. It’s been more about the experience and being able to represent South Dakota. It’s such a great state. I don’t think anybody’s actually made it to the finals from South Dakota, so I’m really proud to take a lot of the programs and the patriotism we have here and bring that into the spotlight a little bit.