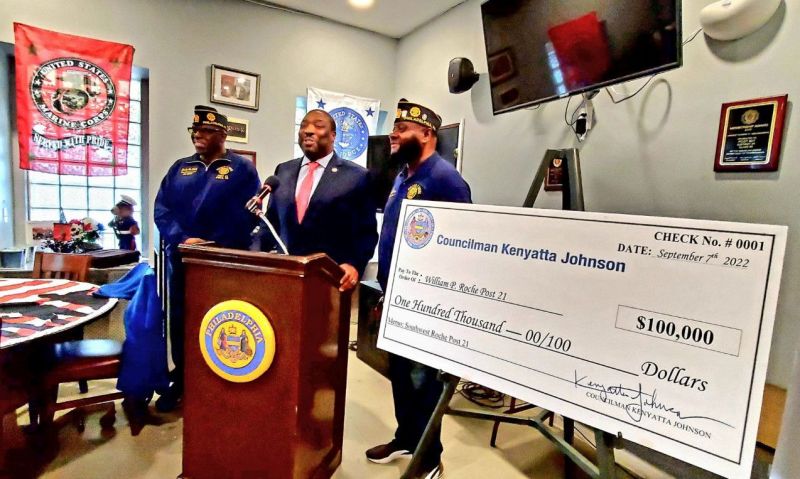 A generous grant from the City of Philadelphia will allow one of its American Legion posts to go back to being a hub for the community in Southwest Philly.

William P. Roche Post 21 recently received a $100,000 revitalization check from the city. The check was presented by Philadelphia City Councilmember Kenyatta Johnson, who was able to secure the grant in the city’s fiscal 2023 operating budget.

“I have known of William P. Roche Post 21’s mission and service to the community for years,” Johnson said via press release. “We share the same mission and dreams for creating safe environments for the community and providing a place that veterans can call home.”

Post 21 Commander Melvin James said the money will allow the post to make some much-needed repairs to its aging facility.

“It’s going to mean a lot for the post,” said James, a member of the Legion for nearly 20 years. “It’s going to help the post out and getting the post back together because we’ve been down for two years because of the pandemic. It means a lot, trying to get this post back to where it belongs.”

During the pandemic Post 21’s membership began some renovations, using their own funds and some donations from others. But other issues need addressed within the facility – which has been the post home since its founding in 1920 – including the plumbing and the post’s main hall.

Burt despite its facility needing work, Post 21 has continued to assist those around it. “We are a very big part of this community,” James said. “People come and patronize us. We give out donations and have food drives. \We’re getting ready to have a Thanksgiving canned food drive. We have toy drives and food drives around Christmas, and the local band students come to practice here.”

Many of the families that have been helped in recent years have experienced gun violence; Johnson sits on the city council’s Special Committee on Gun Violence Prevention.

“This is something that is very dear to me,” Johnson said. “They’re going to be here for a long time, and I want to make sure that things are easier for them. I pushed very hard to get the grant for this job, and I’m happy to see that it came through.”

For James, its an opportunity to improve a building that already has a special place in the Legionnaire’s heart. “It meant a lot to get this grant from Kenyatta’s office,” he said. “It will help us with the hall and with the community. This old building means a lot to me because I’ve been here many a year. So I’m trying to straighten it out and get it done. I love that post. It means a lot to me.”