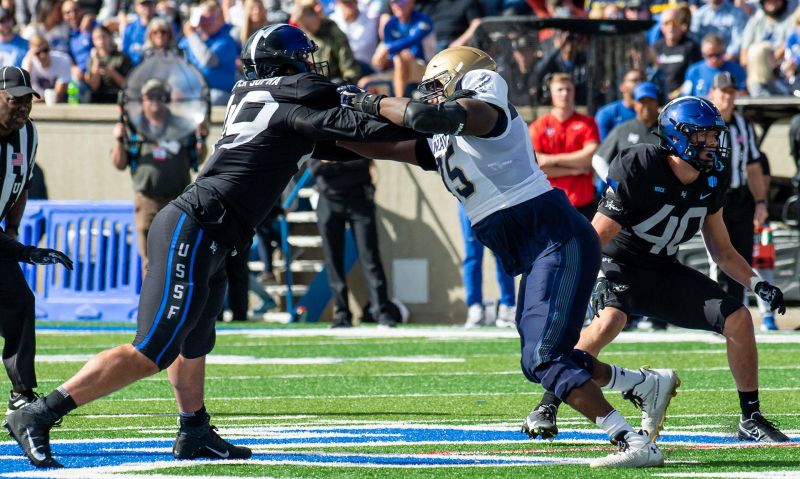 A 22-yard field goal by Mathew Dapore with just 4:14 left in the game carried host Air Force to a 13-10 football win over Navy on Saturday.

“They (Navy) played their hearts out,” said Air Force Head Coach Troy Calhoun. “Our guys did, too.

“We couldn’t be luckier than (having) those men that are going to go fight for our country, the constitution, our democracy…I hate to go beyond football, but it is beyond football. My goodness, what do you want in a future warrior? You and I both want people that have some drive, a little bit extra. If you’re going to go fight for freedom and democracy, we want that in our men and women. We saw that out there today with both teams.”

Numbers don’t mean much when any of the three military academy teams play each other in football, and Saturday’s Navy-Air Force game demonstrated why. Anchored by a strong nucleus of seniors, the Falcons (4-1) came into the contest as the nation’s leading rushing team (averaging 412.3 yards per game). Navy (1-3) had just four seniors among its 22 starters and had needed some crucial performances from an unheralded third-string kicker to score a 23-20 double-overtime win for its only victory. On paper, the Falcons should have won convincingly and Las Vegas odds makers installed them as 14-point favorites.

However, the games are won on the field of play, and that is why football is used as a key instructional tool at all three academies. Yes, teamwork, preparation, discipline, and execution are necessary to win, but the unpredictability of the performance of the opposition and of circumstances means that adaptability, resilience and individual effort can be crucial factors that determine the final outcome.

“This (institution and game) is about the investment in our young men and women as leaders,” Calhoun added. “There were a number of mistakes today. But it is so fruitful to learn from those mistakes. They’re honest, full speed, aggressive mistakes. You jump in an F-35 and that’s exactly what we want in our warriors. And Navy’s (Midshipmen) are just like that and more. You go shake their hands and you think, ‘Holy cow, how fortunate are we? They’re going to go fight for our country, too, just like our men and women here at the Air Force Academy are.’ And they don’t do it because they’re expecting attention, accolades or recognition. They do it because in your soul, you give. That’s pretty awesome. The players, absolutely, but really both student bodies.”

Some fans had not even settled into their seats when the scoring began. On the third play from scrimmage, Falcons’ quarterback Haaziq Daniels made a 26-yard toss to receiver David Cormier, who pulled in the ball and sprinted 41 yards down the left sideline for the touchdown.

Navy responded with six plays that gained 32 yards and left the midshipmen in a 4th-and-2 situation on the Air Force 42. Navy went for the first down and quarterback Tai Lavatai tried to push through, but he only gained a costly 1 yard.

Air Force took over, and runs by John Lee Eldridge III and Brad Roberts advanced the ball to the Navy 48. Daniels then completed another pass to Cormier, who was brought down on the Navy 13. The drive fizzled on the Navy 6 and Dapore drilled a 22-yard field goal to give Air Force a 10-0 lead with 4:17 left in the first quarter.

The defensive units for both teams then dominated play. Navy punted to end its next four possessions, but Air Force was no better, punting twice and fumbling the ball away twice. The second takeaway – a quarterback strip sack by Navy’s Jacob Busic – left the Midshipmen on the Air Force 31 just 34 seconds before intermission. With just three seconds on the clock, kicker Daniel Davies pounded a 37-yard field goal at intermission.

After the break, strong defense – emphasizing anticipation and controlled reaction – kept both teams from scoring in the third quarter. In the final stanza, Navy knotted the contest 10-10 to end a 10-play, 59-yard drive when Lavatai hesitated just long enough to allow the Air Force defense to shift to his right before he dashed 5 yards into the end zone with 10:50 left in the game.

The Falcons followed with a 9-play, 71-yard drive that ended with Dapore’s winning boot that made the score 13-10. More determined defensive play meant that neither team scored again.

The Falcons were led by Roberts, who logged a game-high 108 rushing yards (his 13th game of 100 yards – one shy of the Air Force record) on 23 carries, and Cormier, who grabbed three passes for a game-high 120 yards. Daniels completed 6 of 8 passes for a career high 156 yards and ran 14 times for 65 yards. Defensively, linebackers Alec Mock (13 tackles) and Vince Sanford (10 tackles) both recorded career highs. As a team, Air Force registered 200 yards rushing and 156 yards passing.

Navy standouts included Lavatai (completed 11 of 20 passes for 129 yards, ran 12 times for team-high 34 yards), Jayden Umbarger (game-high four receptions for 71 yards), and defenders Rayuan Lane III and Busic (both with nine tackles). The Midshipmen posted 114 yards on the ground and 129 yards in the air.

“Yes, it’s a game,” Calhoun said. “It’s so competitive among the two teams that it gets to where you don’t like each other during the game. It’s just that when sports are all said and done, (you wonder) how well educated are these young men and women and when they really, really have to lay it on the line (you hope) they will. That’s reality. So, we came out on top today, but as we got into it we thought we really don’t want anybody to lose.”

With the win, Air Force takes the first step to claiming the Commander-In-Chief’s Trophy. If the Falcons can defeat Army in the Commander’s Classic at Globe Life Field in Arlington, Texas, on Nov. 5, they would clinch the trophy competition for the year (what would be their first trophy win since 2016) and earn the right to possess and display it in 2023. If Army triumphs in November, the Black Knights could win the trophy battle with a victory in the Army-Navy Game Dec. 10 at Lincoln Financial Field in Philadelphia.