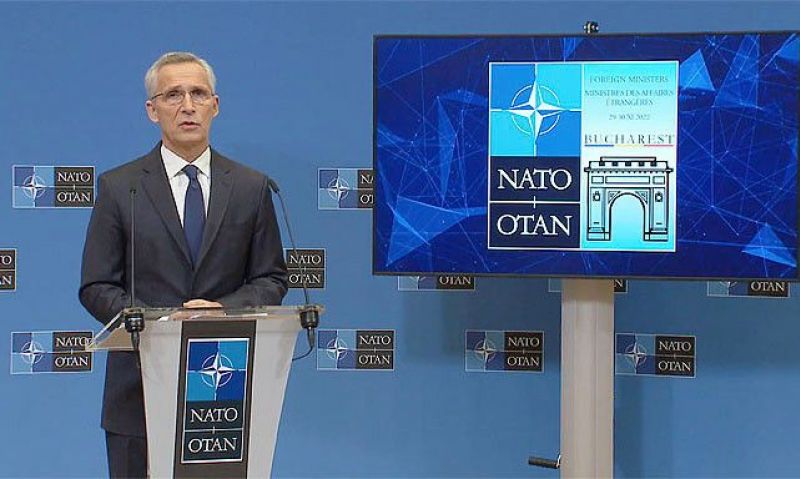 1.       Ukraine prepared for more Russian strikes on Monday and warned of the possibility for a new round of evacuations from the capital during a relative lull from the airstrikes on energy facilities and other key infrastructure in recent weeks. In the West, meanwhile, preparations were stepped up to boost humanitarian aid to Ukraine so that the population can enjoy some warmth during their coldest months of need and keep the resolve of the nation as high as possible.

2.      NATO returns on Tuesday to the scene of one of its most controversial decisions, intent on repeating its vow that Ukraine — now suffering through the 10th month of a war against Russia — will join the world’s biggest military alliance one day. NATO foreign ministers will gather for two days at the Palace of the Parliament in the Romanian capital Bucharest. It was there in April 2008 that U.S. President George W. Bush persuaded his allies to open NATO’s door to Ukraine and Georgia, over vehement Russian objections.

3.      A member of the U.S. Navy who was injured while helping prevent further harm during a shooting at a gay nightclub in Colorado last weekend said Sunday that he "simply wanted to save the family that I found." Navy Petty Officer 2nd Class Thomas James made his first public comments on the shooting in a statement issued through Centura Penrose Hospital in Colorado Springs, where James continues to recover from injuries suffered during the shooting.

4.     A rocket carrying three astronauts to finish building China’s space station will blast off Tuesday amid intensifying competition with the U.S., the government said Monday. The crew includes a veteran of a 2005 space mission and two first-time astronauts, according to the China Manned Space Agency.

5.    North Korean leader Kim Jong Un's daughter made a public appearance again, this time with missile scientists and more honorific titles as her father's "most beloved" or "precious" child. She's only about 10, but her new, bold photos are deepening the debate over whether she's being primed as a successor. On Sunday, the North's official Korean Central News Agency mentioned her for the second time, saying she and Kim took group photos with scientists, officials and others involved in what it called the test-launch of its Hwasong-17 ICBM.