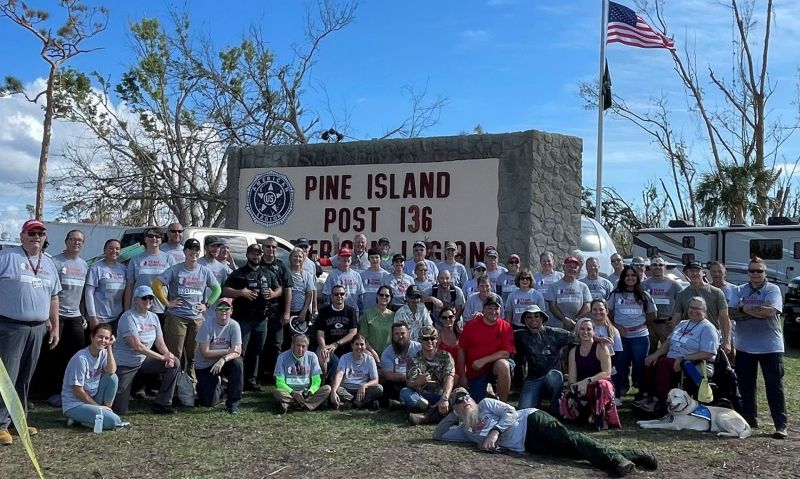 As it has for decades, members of the American Legion Family again set aside their time and efforts on and around Thanksgiving Day to assist others, hosting dinners, delivering meals to those homebound, providing support to first responders and bringing a little bit of home to servicemembers stationed away from their families.

And in one particular case, an effort by a Florida American Legion post garnered national attention.

In St. James City, American Legion Post 136 hosted a community Thanksgiving dinner for the residents of Pine Island, which early this fall was devastated by Hurricane Ian and its 150 miles per hour winds.

Among those who attended the meal were members of Team Rubicon, who have been in Florida since shortly after Ian hit to assist with clean-up and rebuilding efforts. Also in attendance was NBC News Senior Business Analyst and MSNBC 11th Hour host Stephanie Ruhle, who has deployed with Team Rubicon to assist their efforts.

Ruhle took to both Twitter and Instagram to thank Post 136, tweeting out “This year we cleared branches instead of dishes & learned those who wield chainsaws are like those who carve turkeys, BOSSES. Thank you Pine Island American Legion for hosting @teamrubicon for a Thanksgiving lunch.”

In turn, American Legion Post 136 turned to social media to thank others for assisting its effort, specifically posts in Florida’s District 16: Post 238, Safety Harbor; Post 273, Madeira Beach; Post 275, Dunedin; Post 158, Treasure Island; Post 104, Pinellas Park; Post 14, St Petersburg; and Post 252, Seminole. Post 136 thanked its fellow posts “for all your generosity and kindness to reach out to help us make a #Thankgiving2022 feast for the pine island Community... We have been through a lot on this island but we are strong and (are) here for every one of our veterans, members, officers and above all community... So again thank you from the bottom of hearts District 16 for being there with your kind hearts...”

In Safford, around 400 people were provided Thanksgiving meals from members of Swift Murphy Post 32’s American Legion Family. Approximately 200 were packaged for carry-out or were delivered by members of American Legion Riders Chapter 32, while the rest were served cafeteria style at the post. The effort received assistance from American Legion Post 95 in Solomon.

·       In Salinas, American Legion Post 31 continued its decades-long tradition of serving a Thanksgiving dinner that provided 730 meals to members of the community. "It's just a joy being here and being able to give back to the community," volunteer Diana Dominguez told KION-46. "This is not really a typical Thanksgiving. A typical Thanksgiving is maybe cooking all day long and things like that. This is a lot more important. It feels more special just to be here and be a part of this."

·       In Colorado Springs, American Legion Riders Chapter 209 led an effort that collected 24 Thanksgiving dinner boxers to provide meals to those in need. The chapter also collected items to put in “goodie bags” to deliver to Colorado Springs first responders. All the items in both the meal boxes and goodie bags were provided by members of Post 209’s Legion Family.

·       In Pensacola, American Legion Post 340’s Legion Family hosted a Thanksgiving lunch for 26 servicemembers stationed at Corry Station Pensacola. "It's very disappointing being away from your family on a holiday, especially because they're here to serve us," Auxiliary Unit 340 member Mary Jo Willemstein told WEAR-TV. "We appreciate everything they do for us and our country – and we support them."

·       In Arlington Heights, American Legion Post 208 hosted 45 sailors in the midst of their U.S. Navy basic training at the Great Lakes Recruit Training Center for a Thanksgiving meal. “We are hosting them to give them everything they didn’t have in basic training and they’re so excited,” Post 208 Legionnaire Greg Padovani, the chairman of the Veterans Memorial Committee in Arlington Heights, told NBC Chicago.

·       In Franklin County, Benton Post 280’s American Legion Family and Veterans of Foreign Wars Chapter 280 teamed to host a community Thanksgiving dinner. Post 280 also provides a Christmas dinner. Past Post 280 Commander Gary Fravell told WSIL that the reason the post started doing the meal was, "I started to see a need within the community of veterans, especially single veterans, that were starting just to stay shut in.”

In Polk City, American Legion Riders Chapter 232’s 10th annual Holiday For Heroes delivered 450 Thanksgiving meals this year to veterans in need and their families. The chapter fund raises throughout the year to support the effort, and also receives assistance from local business, organizations and government officers.

In Gloucester, Capt. Lester Wass American Legion Post 3 cooked and delivered more than 600 meals to senior citizens, veterans and others in need around Cape Ann, Ipswich and Hamilton. More than 60 volunteers assisted in the kitchen, while another 60 provided meal delivery.

“We come from Gloucester, and Gloucester has always supported the veterans, so we wanted to give back,” Post 3 Commander Mark Nestor told The Daily News. “It’s a great effort from the community.”

“You know what, why don’t we do something that gives back to all the people that are separated, that don’t have family to go to, that don’t have things to do on Thanksgiving?” Post 179 Commander Patrick Burns told FOX 17.

In Rochester, William T. McCoy American Legion Post 92 Commander C. Gilmore took to the KIMT 3 airwaves to remind others to reflect and say thank you to servicemembers who are not at home for the holidays.

In Horseheads, American Legion Post 442 hosted a Thanksgiving dinner for veterans and their families, as well as those in need.

In London, American Legion Riders Chapter 105 prepared a Thanksgiving dinner for veterans and their families, and first responders.

·       In Plains Township, members of Department of Pennsylvania District 12 organized a Thanksgiving party for seven veterans at the VA Wilkes-Barre Healthcare System. Nicole R. Guest, a member of American Legion Post 350 in Nanticoke and the District 12 Canteen Fund representative, told the Times Leader “Today was absolutely phenomenal. We were so thankful to be with (the veterans) because we are so thankful for them. We just love them and we never, ever, ever leave a brother or sister behind. They fought for our freedom. Every holiday and every weekend we will be in there, God willing.”

In Williamstown, American Legion Post 159 again hosted a community Thanksgiving meal and also put together meals that could be delivered or picked up.

Post 159 Second Vice Commander Lawrence Vanhorn told WTAP that the post hosts the meal and does other outreach efforts to “mainly just try to give back to the community where we can and when we can.”

·       American Legion Post 521 (Pasadena) and Spring Branch American Legion Post 654 (Houston) each served as locations for Operation Turkey Houston, which works to ensure that everyone receives a warm Thanksgiving meal. Around 2,200 meals were prepared at each post.

·       In Cleburne, members of C.E. Delario Post 50’s Legion family delivered meals on Thanksgiving through Meals on Wheels for the 30th year.