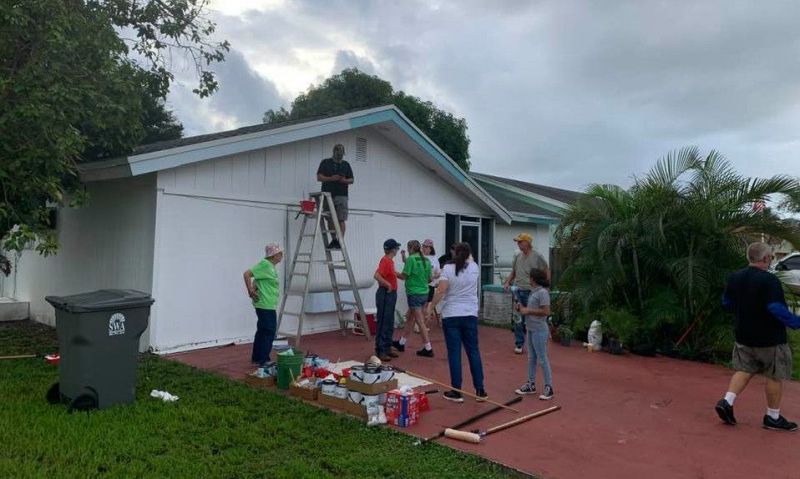 When Jane Hardacre took the role of American Legion Auxiliary president of the Department of Florida, she did so with her sleeves rolled. “When we first started the year, I wanted to be a working department president,” said Hardacre, a member of Unit 238 in Safety Harbor, Fla.

That message was shared with Hardacre’s district presidents during a “boot camp,” when she said the instructor for the boot camp told the participants, “(Hardacre) has no problem if a unit wants to hold a dinner. But she wants to pack boxes for the troops with you. Or if your thing is you have Christmas parties for the children, she wants to go and help you do those things.”

Eleventh District President Sandy Swafford took that message to heart and had work lined up for Hardacre during her recent official visit to the district. Included in Swafford’s itinerary for Hardacre’s visit was a stop at a 93-year-old Korean War veteran’s house for a day of painting.

“When I saw that house painting for a vet on there, I was blown away,” Hardacre said. “I told her all weekend, ‘Sandy, you are the epitome of a district president taking the direction from leadership.’ She nailed it. That’s all I can say.”

The Legion Family contingent painted the entire outside of the home of Mickey Salazar, who couldn’t do it himself. A second group will head back later to finish the trim and do some repairs to the windows.

“We went out there as a Legion Family,” Hardacre said. “We had every facet, even a Junior (Auxiliary member). And that district is going to continue to take care of that veteran.”

Salazar told Local10.com, “I’m very grateful. I never expected anything like this to happen.” Hardacre said while the group was painting, the Korean War veteran said if he had any money, he’d have paid them for their work.

“We all … said to ourselves, ‘Are you kidding me? We wouldn’t have taken a penny of your money to do this,’” Hardacre said. “We’re always looking to help the veterans, and a lot of times our veterans won’t ask for help.”

Hardacre’s theme for the year is C.O.L.O.R.: Continue Our Legacy Of Respect. “(Painting Salazar’s home) is continuing our legacy of respect,” she said. “It’s the perfect example.”