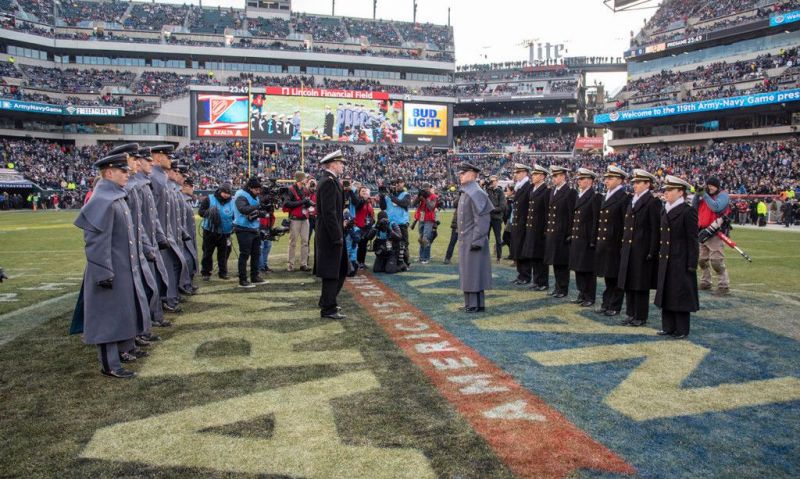 (Photo by A. Sinagoga for PHLCVB)

It is almost time for “The Game”.

At the U.S. Military Academy at West Point, N.Y., and the U.S. Naval Academy at Annapolis, Md., the students – more than 4,500 at each institution – spend 364 days a year preparing for “The Game”, painting signs and banners, ending totally unrelated conversations with statements urging victory over this one rival.

There is no other competition that rivals the Army-Navy Game; the 123rd meeting of the two teams is set for Saturday (2:30 p.m. ET, pre-game show, 3 p.m. kickoff – both nationally telecast on CBS TV) at Lincoln Financial Field in Philadelphia.

“This is a tremendous source of pride for me, personally,” said Army Head Coach Jeff Monken in preparation for his ninth Army-Navy Game. “I’m just so thrilled to be a part of this team and this game. It’s the greatest rivalry in sports and the intensity of the competitors in this game is unmatched. It’s just an incredible experience. Every year it’s the same – it’s the most competitive battle I’ve ever been a part of. You can throw out everything that’s happened in the first 11 games of the season. This game stands alone. I think both teams will play really hard and there’s an intensity to it all its own. Our guys are going to be excited and, hopefully, ready to play.”

It is a game where for 60 minutes both teams will try to defeat the other with all the strength and determination they can muster, knowing full well that most will never play in the NFL. It is even more serious for the seniors; they know that six months from now the performance of those on the opposing sideline could determine whether they survive or not. Yes, the Army-Navy Game is so much more than a game.

One of college football’s oldest rivalries provides an annual opportunity to demonstrate to viewers around the country the intensity, strength, intelligence, resourcefulness and endurance of the military leaders of tomorrow. The Army-Navy Game is also a test of the student athletes’ abilities to work as a team while still having the chance to contribute individual excellence in a competitive environment. As the student athletes mature and develop these skills, they become better leaders.

A symbol of the value of football to building character and leadership can be found on a brass plaque mounted on a wall (except on game days) at the southeast corner of Michie Stadium at West Point. It features words supposedly spoken by General George Marshall, then the Chief of Staff of the Army, to an assistant during World War II: “I want an officer for a secret and dangerous mission. I want a West Point Football player!” On Saturday, a game-day tradition will continue when a distinguished military leader will hold the plaque aloft as the players touch it while running onto the field before kickoff.

“It’s Army-Navy and that’s all that needs to be said,” said Navy Head Coach Ken Niumatalolo, the winningest coach (10-4) in the history of the Army-Navy-Game. “It’s going to be a slugfest. I’ve been in this game 24 times and it’s always a slugfest. One thing I’ve learned about this game is that nothing prior means anything. The game never changes. This is my 15th as a head coach and 25th overall, but it feels like the first one. I’m super proud of our team. I feel like we’re playing our best football right now and our senior group has a chance to go 3-1 against Army, so that’s my message to them.”

Won-loss records mean little coming into this game because the two schools play a different style of football than most of NCAA competitors. Army, Navy and, to a lesser degree, Air Force (which claimed narrow victories over both Navy and Army to earn the title of Commander-In-Chiefs Trophy Champion for 2022), play a run-focused offense since their players must also pass military fitness requirements. The high academic requirements of the institutions also limit player recruitments.

This year, Army (5-6) and Navy (4-7) are exceptionally evenly matched. Both teams struggled early in the season and suffered multiple close losses, but they improved as the year progressed and they come into Saturday’s contest off victories – Navy (which will be wearing mostly white uniforms to honor the 54 astronauts (most of any branch of military service) who have come from the Navy)  upsetting 17th-ranked University of Central Florida, Army (which will sport mostly black uniforms paying tribute to the First Armored Division that triumphed in North Africa, Italy and Western Europe in World War II) topping bowl-bound Connecticut and Massachusetts.

The Black Knights (who lost five games to teams who have been invited to bowl games) enter the game averaging 304.4 yards per game (including two games with more than 450 yards gained on the ground), second best in the nation, and 37 running touchdowns, third best in the country. The punishing running game takes a physical toll on players, so 11 Army players have rushed for at least 100 yards in a game – the most on any NCAA team since 2015. Starting Quarterback Tyhier Tyler has run for 601 yards (team high) and 12 touchdowns this year (tied for the lead among all QBs). Running Back Jakobi Buchanon (335 yards) has run for six TDs this year and is tied with Tyler (and alumni Kelvin Hopkins and Gil Stephenson) for 10th best on Army’s all-time scoring list with 24 career running touchdowns.

The Army defense is led by co-captain Marquel Broughton (78 tackles, three interceptions and two forced fumbles) and Leo Lowin (84, two, one and one recovered fumble), who seem to be involved in almost every big play. Outside linebacker Andre Carter II, a projected first round selection in the NFL draft, has 37 tackles and is the team leader in tackles for loss (seven) and QB sacks (3.5).

Navy features just four seniors among its 22 starters, leaving it tied with four other colleges for having the third fewest in the country. The Midshipmen suffered a severe loss when starting quarterback Tai Lavatai was lost for the year in the first quarter against Temple game (Oct. 29) with a left knee injury. Backup quarterback Xavier Arline, also a starter on the Navy lacrosse team, sparked a comeback that culminated in a 23-yard TD run in overtime for the victory. He also directed the upset triumph over UCF while rushing for a crucial TD.

On defense, the Midshipman rank fourth in the nation, giving up and average of just 85.6 rushing yards per game. Senior striker John Marshal has been dominant; he leads the Navy in tackles (88), tackles for loss (18.5), sacks (10.5), pass breakups (seven) and quarterback hurries (six). He is the school record holder for most sacks in a single season, while his single-season tackles
for loss are the fourth most in program history.

Regardless of who wins, remember to watch the post-game ceremonies, when both teams proudly stand at attention while the school bands play each team’s alma mater. The winning team earns the privilege of singing last. It is the greatest honor in sports.