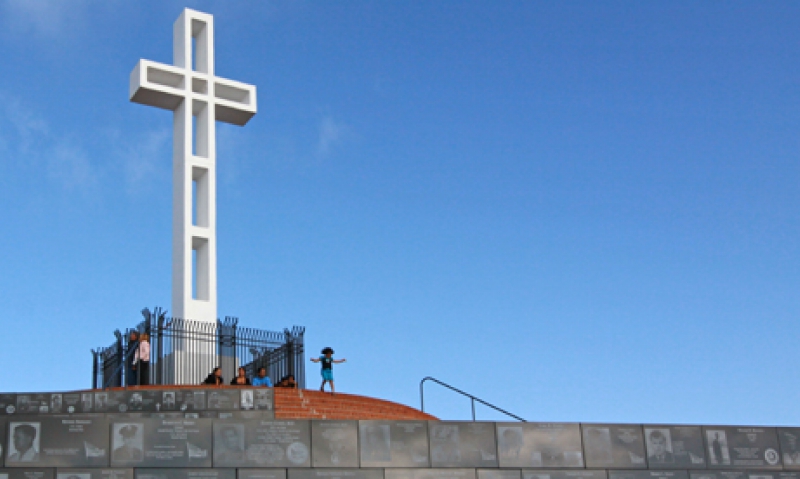 National Commander Clarence Hill is in California this week, while a battle rages in San Diego over a case that resembles one that went before the Supreme Court in October and is awaiting a ruling.

The Mt. Soledad Veterans Memorial near San Diego features a 29-foot Latin cross that was erected in 1954 to honor U.S. veterans. The American Civil Liberties Union wants the cross taken down because it stands on public land; the case currently is awaiting a ruling in the Ninth Circuit Court of Appeals.

Meanwhile, the Supreme Court is still deciding whether the Sunrise Rock War Memorial - known as the "Mojave Cross" - will remain standing in the Mojave Desert.

"As the nation awaits the U.S. Supreme Court's decision on whether a harmless cross can remain in the Mojave Desert as a tribute to veterans, the Ninth Circuit Court of Appeals is considering another important case right here in California this week," Hill said. "The ACLU is trying to remove a similar cross from Mount Soledad. If the ACLU succeeds, are the thousands of crosses and Stars of David at veterans cemeteries next?"

Hill said a decision calling for the removal of either cross is wrong for multiple reasons.

"How can the United States be considered ‘one nation under God' if it removes all symbols of God from the public square?" Hill said. "The American Legion believes that these symbols are not only worth preserving, but the government of the United States should also do everything in its power to end these frivolous lawsuits. Not only should the courts rule against those who would remove the symbols of veterans memorials, but Congress should also pass the Veterans' Memorials, Boy Scouts, Public Seals, and Other Public Expressions of Religion Protection Act of 2009, preventing the ACLU and like-minded organizations from bilking the public treasury to pay for its misguided lawsuits against religious memorials."

Liberty Legal Institute filed an amicus brief representing millions of veterans through The American Legion in the case, billed as Jewish War Veterans v. City of San Diego, to save the memorial from being torn down.

"Tearing down this veterans' memorial would be a disgrace," said Kelly Shackelford, chief counsel of Liberty Legal Institute and attorney for The American Legion. "It would not only dishonor those who have spilled their blood and given the ultimate sacrifice for their country, but it would open up veterans memorials nationwide to attack."

The memorial's Latin cross, the traditional symbol used in World War I memorials, is surrounded by six concentric walls with names and photos of fallen soldiers, including other symbols such as Stars of David, and is dedicated to the memory of World War I, World War II and Korean War veteran.

Liberty Legal Institute currently represents The American Legion, Veterans of Foreign Wars of the United States, Military Order of the Purple Heart, and others, in similar war memorial cases, including the Mojave cross case.